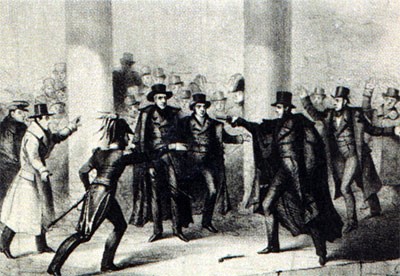 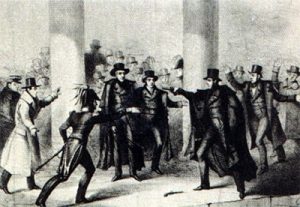 After twelve years of its existence and during which period, the ‘Second Bank of the United States,’ ruthlessly manipulated the American economy to the detriment of the people but to the benefit of the banksters’ own money-grabbing ends, the American people unsurprisingly were tired of all the deception.  Opponents of the bank nominated Senator Andrew Jackson of Tennessee to run for President.  He was no friend of the Rothschilds and he had no love of their central bank system either.  Immediately upon his election to the highest office, he set about bringing down the bank and eliminating all Rothschild’s many placement in the government’s ‘service.’  In order to illustrate how deeply this ‘cancer’ was intertwined within government circles, he dismissed 2,000 of the 11,000 employees of the US Federal Government.

But even after President Jackson’s purge of Rothschilds’ minions, they still managed to gain undue influence with Congress and cajoled them to approve an early renewal of the Second Bank of the United States’ charter.  Congress, as complicit as ever, sent the bill to President Jackson for signing but he refused their overtures and in his reply to them he stated the following:

“It is not our own citizens only who are to receive the bounty of our Government.  More than eight millions of the stock of the Bank are held by foreigners… Is there no danger to our liberty and independence in a bank that in its nature has so little to bind it to our country?  Controlling our currency, receiving our public monies, and holding thousands of our citizens in dependence… would be more formidable and dangerous than a military power of the enemy.  If government would confine itself to equal protection, and, as Heaven does its rains, shower the favour alike on the high and the low, the rich and the poor, it would be an unqualified blessing.  In the act before me there seems to be wide and unnecessary departure from these just principles.”

Congress was, of course, unable to override President Jackson’s veto who then stood for re-election and for the first time in American history he took his argument directly to the people by taking his re-election campaign ‘on the road.’  His campaign slogan was, “Jackson and No Bank!”  Even though the banksters poured over $3 million into President Jackson’s opponent, the Republican Senator Henry Clay’s campaign, Jackson was re-elected by a landslide in November 1832.

President Jackson well knew that the battle was only beginning however and following his victory he stated, “The hydra of corruption is only scotched, not dead!”

He appointed Roger B. Taney as Secretary of State for the Treasury with instructions to commence the removal of the government’s deposits from the Second Bank of the United States.  Jackson’s previous two Secretaries of State for the Treasury, William J. Duane and Louis McLane had both refused to comply with the President’s request and were dismissed as a result. However, the President of the Second Bank of the United States, Nicholas Biddle, used his massive influence to get the Senate to reject Roger B. Taney’s nomination and even threatened to cause a depression if the Bank was not re-chartered.

In retaliation, on 10th September 1833, with an executive order, President Andrew Jackson then removed all Federal funds from the Second Bank of the United States and placed them with various state banks.  The Rothschild agent, Nicholas Biddle protested furiously along with all the many ‘Rothschild-owned’ politicians.  Biddle defiantly stated that “Just because he has scalped Indians and imprisoned judges [does not mean] he is to have his way with the bank.  He is mistaken.”

He then threatened Jackson and Congress with this statement:

“Nothing but widespread suffering will produce any effect on Congress; Our only safety is in pursuing a steady course of firm restriction – and I have no doubt that such a course will ultimately lead to the restoration of the currency and the re-charter of the bank.”

In simple terms he was in effect threatening to instigate a recession by withholding the printing of currency – as was his prerogative of course.  After all, the Second Bank of the United States was responsible for the entire economy, totally free from any possible government intervention.  This statement alone is proof enough to the world what central banks are really all about.  He actually made good on his word and the Second Bank of the United States sharply contracted the money supply by calling in old loans and refusing to issue new ones. Naturally, a financial panic ensued, followed by the US being plunged into a deep recession.

Biddle then unashamedly blamed President Jackson for the crash, claiming that it was Jackson’s withdrawal of federal funds that had caused it. This crash decimated wages and prices and unemployment soared, along with business bankruptcies.  The United States was in uproar and newspaper editors blasted the President in editorials. So, in 1834 Congress assembled what was known as the ‘Panic Session’ and on the 28thMarch, President Jackson was officially censured by Congress for withdrawing funds from the Second Bank of the United States, in a vote which was passed by the Senate by 26 to 20.  It was the first time a President had ever been censured by Congress.

Jackson, whose nickname was ‘Old Hickory’ because of his tough, uncompromising personality, responded to this latest bankster outrage with some powerful words:

“Gentlemen, I have had men watching you for a long time and I am convinced that you have used the funds of the bank to speculate in the breadstuffs of the country.  When you won, you divided the profits amongst you, and when you lost, you charged it to the bank. You tell me that if I take the deposits from the bank and annul its charter, I shall ruin ten thousand families. That may be true, gentlemen, but that is your sin! Â Should I let you go on, you will ruin fifty thousand families, and that would be my sin! Â You are a den of vipers and thieves. Â I intend to rout you out, and by the Eternal God, I will rout you out.”

But surprisingly and in a complete about-turn on the 4th April, the House of Representatives voted 134 to 82 against re-chartering the bank.  This was followed by another vote which established a special committee to investigate whether the Bank had caused the crash.  Then on 8thJanuary 1835 after Congress had only a few months earlier censured President Andrew Jackson for his so-called ‘abuse of power’ in relieving the Second Bank of The United States of its Federal deposits, a large assembly of political figures gathered in Washington, a Senator rose to his feet and made a simple, brief announcement… “Gentlemen, the national debt is paid!”

When Jackson took office the national debt of the United States was $58 million, six years of his Presidency later, the debt was zero.  Jackson was the only American president to achieve this feat and this was the one and only time that the United States of America was debt-free.

Unfortunately, this debt-free America lasted a mere one year only.  On 30th January 1835 President Jackson set another, this time unsought precedent when he became the first American President to be targeted for assassination.  Indeed, the unemployed housepainter Richard Lawrence was also setting a precedent in being the first of a long, long series of so-called ‘lone nut’ assassins.  He approached Jackson outside the House Chamber of the Capitol with two Derringer pistols, taking his first shot at thirteen feet but fortunately for his intended target the percussion cap exploded but there was no discharge.

The outraged 67 year old President raised his cane ready to strike Lawrence as he fired the second pistol close up against Jackson’s chest, but it misfired yet again.

Jackson then beat his would-be assailant with his cane but was interrupted by none other than Senator Davey Crockett of Tennessee, who was to lose his life at the Battle of the Alamo in the following year.  It must indeed have been divine intervention that saved the President from death, after ironically attending the funeral of South Carolina congressman Walter R. Davis.  Jackson’s courage was legendary; he had stared death in the face on many occasions, both in battle and in numerous duels of honour.

Almost one hundred years later in 1930, the two pistols were tested by the Smithsonian Institute and both of them fired normally on the very first attempt.  Lawrence was declared insane, as is the general way of things, and later died in an asylum.  Jackson sincerely believed, and with good cause, that it was the Rothschilds who made use of this ‘useful idiot’ lone-nut assassin.

Before his death in 1845, Jackson left clear instructions for the following inscription to be placed on his tombstone, “I Killed the Bank.”

Yet the last word, the last ironic insult, was the banksters’ ‘honouring’ of Jackson by featuring him on their $20 dollar bill many years later, after the creation of their highly criminal enterprise, the Federal Reserve Bank.