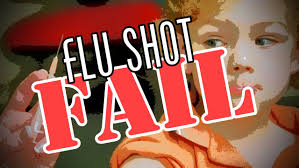 Here we are in the winter of 2015, and U.S. public health officials admit that the historically ineffective influenza vaccine is once again an epic fail.1,2

In the past three flu seasons, the CDC has claimed the flu vaccine’s overall effectiveness clocked in at between 47 and 62 percent3 while some experts have measured it at 0 to 7 percent.4

Other studies suggest that when children get a flu shot every year it can interfere with healthy immune responses and make them more likely to get influenza in certain flu seasons.5,6

Independent medical literature reviews document that flu shots don’t really prevent influenza or complications of influenza7,8 or influenza-like-illness (ILI) associated with other types of viruses that cause about 80 percent of all respiratory or gastrointestinal infections during any given flu season.9,10,11,12

A car in which seatbelts and brakes only worked at best half the time is not a car Americans would choose to buy or drive. Car manufacturers profiting from selling that kind of defective product would be sued in civil court, and rightly so.

Americans Forced to Get Flu Shots or Suffer Sanctions

Yet, U.S. public health officials are making flu vaccine policy that gets turned into law.13,14 They are forcing Americans to buy and use a pharmaceutical product that fails to work as advertised time and again and can brain injure people, too.15,16,17

But we can’t sue drug companies for vaccine failures, brain injuries, and deaths in civil court.18

Many of us are being fired from our jobs or denied an education, childcare and medical care if we refuse to salute smartly and get a flu shot every year or give it to our children.19,20,21,22

Dominant Influenza A Strain NOT in Current Flu Shot

This past December, CDC officials held a press conference and informed Americans that they were unaware last spring that one of the influenza A strains selected for the 2014-2015 flu vaccine – the H3N2 subtype – was starting to “drift.”

It turns out that the genetically mutated subtype is the dominant influenza A strain causing sickness this year, but it is not in the flu vaccine.25,26,27,28

Bottom line: if you or your child got a flu shot this year, it does not protect you from the most common influenza A subtype making people sick. And now, some influenza experts are warning that flu shots do not make symptoms less severe if the vaccine fails to prevent influenza infection.29

Is this the first time that federal health officials have been aware that the influenza A H3N2 subtype constantly mutates and is often the dominant strain of flu that circulates in the U.S.? No, it’s not.

Let’s go back and take a look at the 2003-2004 flu season’s epic influenza vaccine fail. In the spring of 2003, federal health officials did know ahead of time that the influenza A Panama strain they chose for the seasonal flu vaccine was not a match for the emerging mutated H3N2 Fujian strain making people very sick.

Influenza experts told the FDA vaccine advisory committee (VRBPAC) that two genetic mutations in the H3N2 strain would likely cause the flu shot to fail if it was not included in the vaccine.30

As the consumer voting member at that March 2003 FDA committee meeting, I abstained from the influenza vaccine strain selection vote because the influenza A strain being recommended was not a match for the emerging mutated H3N2 strain and said I thought the public should be told.31

So what was the government’s rationale for allowing drug companies to produce a flu vaccine they knew was likely a non-starter from the very beginning?

Well, the vaccine manufacturers said they couldn’t include the mutated H3N2 subtype in the vaccine because they would miss the fall 2003 delivery and marketing deadline!

In other words, it was all about protecting a multi-billion dollar flu vaccine market and not about truth in advertising. Flu vaccine effectiveness for the 2003-2004 season was described by health officials as 3 percent to 14 percent, which does qualify as an epic fail.32

Now let’s look at the 2012-2013 flu season, when flu vaccine effectiveness was 50 percent and only 41 percent in preventing the H3N2 subtype that caused most of the disease that season.

A little digging into the medical literature reveals that the H3N2 subtype problem was not due to a natural antigenic drift like CDC officials are claiming it is this season.

No, flu vaccine failure two years ago was about mutations in the egg adapted H3N2 vaccine strain used by drug companies to produce the vaccine.33

How honest is the CDC being with legislators voting to give federal health agencies and drug companies billions of dollars to produce influenza vaccines34,35,36,37,38,39 that are being aggressively pushed on all Americans, including infants, children, pregnant women and health care workers40,41,42,43 using a pathetically poor evidence base?44,45,46

Influenza viruses that infect humans and animals are always mutating and evolving, recombining with each other and creating new influenza strains being shed and transmitted in body fluids and waste products of animals and humans.47,48,49,50,51 Vaccine strain influenza viruses can recombine with other viruses as well,52 particularly those shed and transmitted by children and adults given live influenza virus vaccines53,54,55,56 and by experimental live virus vectored vaccines being created in labs, with unknown effects on humans, animals and the environment.57,58,59,60

And yet, billions of dollars are being spent by government and industry to build more flu vaccine plants to create genetically engineered flu vaccines that contain insect and animal DNA, foreign proteins61,62,63,64,65 and novel adjuvants designed to hyper-stimulate human immune responses.66,67,68,69,70 In an irrational crusade to outsmart influenza viruses, vaccine risks are increasing71 while vaccine failures continue to haunt the entire money-driven enterprise.72,73,74

After decades of government propaganda trumpeting the benefits and minimizing the risks of annual flu shots, one-size-fits-all, cradle to the grave influenza vaccine recommendations should be revised. Flu shot mandates should be repealed and vaccine manufacturers held accountable for vaccine risks and failures in civil court.