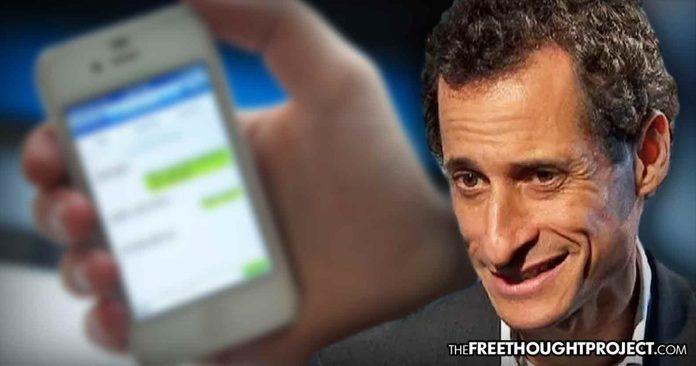 Last year, Anthony Weiner, the disgraced congressman from New York was sentenced to prison after he pleaded guilty to sending a 15-year-old child horrifically graphic texts, images of himself, and videos. Although he was sentenced to 21 months for his crimes, the child predator will be getting out of jail early according to the Federal Bureau of Prisons.

Highlighting the stark special treatment the state gives child predator lawmakers over those caught with a plant is the case of Lee Carroll Brooker. Brooker is a 78-year-old veteran, who unlike Weiner, did not attempt to have sexual relations with a child, but is spending life in prison.

Brooker attempted to self-medicate with a plant the state deems illegal and for this, he was sentenced to life in prison—with no possibility of ever getting out early, like the child predator Congressman. Unlike Weiner, Brooker’s actions had no victim, yet he was sentenced to die in a cage.

Sadly, this special treatment of child predator politicians is the rule, not the exception. In April of 2016, Dennis Hastert, former Speaker of the House and admitted child rapist, was sentenced to 15 months in prison after he was caught paying his victims to keep quiet. However, he was released early last year — two months before finishing his already insultingly lenient sentence.

To highlight just how two-sided this justice system in America is, below are the court documents detailing the actions of Weiner before his sentencing. Lee Brooker had a plant, just like hundreds of thousands of others currently rotting in jail right now. Anthony Weiner pursued sexual relations with a child.

Prosecutors filed these documents in Manhattan Federal Court before the Weiner was sentenced asking that the judge use the sentencing as an opportunity to send a message to other pedophiles.

The Government respectfully submits this memorandum in connection with the sentencing of Anthony Weiner, which is scheduled for September 25, 2017, following his guilty plea to transferring obscene material to a minor. Although the defendant’s self-destructive path from United States Congressman to felon is indisputably sad, his crime is serious and his demonstrated need for deterrence is real. The non-custodial sentence that Weiner proposes is simply inadequate; his crime deserves time in prison. For the reasons set forth below, the Government respectfully requests that Court sentence Weiner to a term of imprisonment within the range of 21 to 27 months.

To ensure that the judge handed down the maximum sentence for the convicted pedophile, US Attorney for the district of New York, Joon Kim, graphically detailed the scenario in the prosecutor memorandum as it unfolded.

In the evening of January 23, 2016, a 15-year-old girl (the “Minor Victim”) initiated contact with the defendant by sending him a direct message on Twitter. Over the next several hours, the Minor Victim and Weiner exchanged a series of messages, ranging from the mundane to the provocative. Early in the exchange, the Minor Victim revealed to Weiner that she was in high school. Despite knowing he was communicating with a high school student, Weiner participated in increasingly suggestive exchanges, telling the Minor Victim, among other things, that he thought she was “kinda sorta gorgeous.” Their communications continued the next morning on Facebook messenger, then moved to Kik, and at some later point, Confide and Snapchat. The latter three all are messaging and photo-sharing applications that delete messages and images once viewed.

As January turned to February, their intermittent exchanges grew more lascivious. This was despite the fact that there could be no reasonable doubt in Weiner’s mind that he was chatting with a minor – in addition to having revealed that she was a high school student, the Minor Victim told Weiner that she was getting her learner’s permit. She explained in Facebook chats that she has “parents that wouldn’t approve of some of the things” she does, and that she likes “older guys,” “[b]ut that’s illegal.” The defendant correctly observed, “You are young,” in one Kik message.

Against that backdrop, between February 17 and 23, 2016, Weiner and the Minor Victim participated in three video chat sessions on Skype.

The instant conduct was revealed to the public and law enforcement in September 2016, when the Daily Mail published the Minor Victim’s account of her communications with Weiner after she participated in a paid interview.

The description of Weiner’s conduct that his victim provided to investigators was truly sickening.

“He had some rape fantasies. It would just be him showing up at my house when my dad was out of town,” the girl told the Mail. “And just start undressing me, being forceful, asking me if I want to be dominated, strange questions.”

Weiner reportedly once told the girl, “I would bust that tight p–y so hard and so often that you would leak and limp for a week,” and sent her bare-chested pictures of himself.

In spite of the sickening details, laid out in the prosecutor memorandum above, Anthony Weiner pleaded guilty to a single charge of transferring obscene material to a minor after turning himself in to the FBI. And now, the disgraced child predator Congressman is reaping the reward of this most corrupt system.