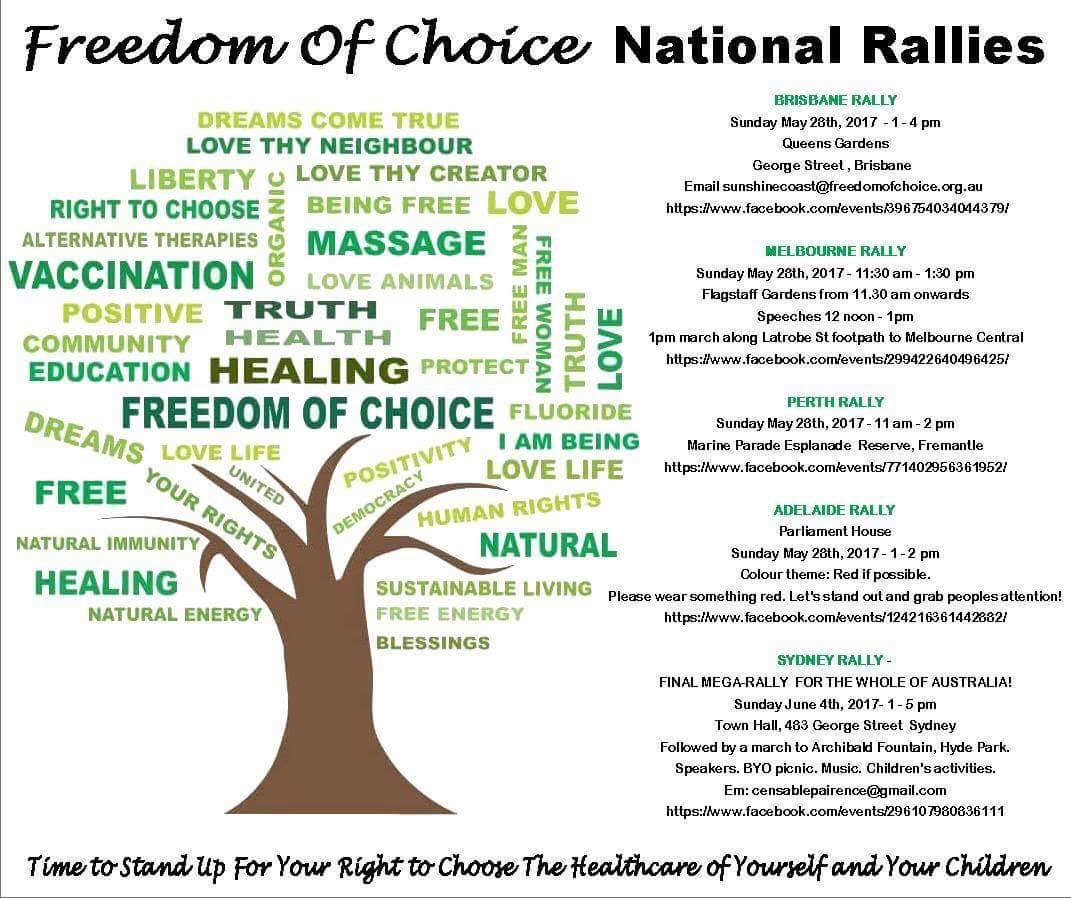 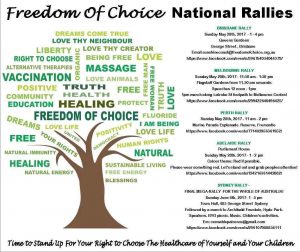 AUSTRALIA-WIDE PROTESTS AGAINST NO JAB NO PLAY!

Mandatory vaccination in Australia is now almost a reality!
Prime Minister Malcolm Turnbull has proposed No Jab No Play legislation to ban unvaccinated children from childcare and preschool. All Australian state governments will vote on No Jab No Play at COAG in Tasmania on June 9, 2017.

The vaccine schedule began to take off  from that point on, with pharmaceutical companies competing for market share to the present day where around 250 new vaccines are currently in development.

New vaccines are not safety tested over long periods of time before use. The current combination of vaccines and their ingredients in the childhood schedule is also not being studied.

“In Australia, the schedule has expanded from 7 vaccines for children in 1990 to 45+ injections in 2017. These injections include antibiotics, aluminium, and foreign proteins, injected directly into the tissues before the body’s excretory and respiratory systems are developed – and before the blood brain barrier is developed.” Dr Judy Wilyman PhD (Newsletter 155)
Vaccination Decisions.
(http://vaccinationdecisions.us8.list-manage.com/track/click?u=f20605fde3732e41929f4a3f2&id=3c3989b087&e=9d2cb6ac8b)

This issue is taking off worldwide!

Senator Robert Kennedy Jr has met with President Donald Trump in January this year to discuss an Independent Vaccine Safety Commission to examine vaccine safety and efficacy. He spoke to Fox news on 20/4/2017.

The American Academy of Pediatrics has argued against this Safety Commission saying that since they already know that vaccines are safe and effective there is no need for further examination. Yet they have refused to back their claims with Science!

AUSTRALIA RELIES ON AMERICA AND THE CDC FOR VACCINES, RECOMMENDATIONS AND SAFETY DATA – SO THIS IS IMPORTANT!

“You’ve had this huge consolidation of the press in our country. There’s now essentially six companies that control almost all the newspapers, all the television stations, all the radio stations, and most of the large internet content providers in America. And almost all those companies are getting very, very large portion of their advertising venue from the pharmaceutical and from vaccine makers…
I think that the reporters on the beat and many of the editors as well think that they are performing a critical public function which is to increase vaccination rates. And they believe that the consensus of allowing debate about vaccine safety would be detrimental to public health, and actually I’ve heard this many times, that we would be killing children because if people don’t vaccinate, children die…
Unfortunately, the consequence of removing scrutiny from the vaccine industry and from the government officials who regulate it has not been to increase the safety or the popularity of the vaccine program.
In fact, the opposite has been true. It has incentivised the worst kind of behaviours in both the pharmaceutical companies who are making these vaccines and by the regulators who are often part of a captive agency phenomena. CDC is really a part of the vaccine industry. I would say a wholly owned subsidiary of.
The vaccine industry and that’s not hyperbole. CDC is actually… buys and sells over $4 billion worth of vaccines annually and if demand for those vaccines is reduced there are severe economic consequences for the agency. So they have to sell those vaccines and they have to create demand for them. And they have the capacity to create demand for them. And both CDC and FDA also are partners in owning vaccine patents.
In addition to that the advisory committees that control the vaccine program are not made up of entirely of CDC employees, but they’re mainly composed of people who have direct financial ties to the vaccine industry and in some cases a huge financial incentive to add new vaccines to the schedule.”
Source: Vaccines Revealed transcripts, episode 3, 2017 Action Potential Holdings, Inc. All rights reserved. Pages 4, 5.

Whooping cough vaccine is often used to push through vaccine legislation – yet vaccinated children and adults are still able to spread whooping cough! This is an accepted medical fact. A prominent Sydney Doctor explains:

“Whooping cough vaccines are failing worldwide, including Australia. One reason is that the pertussis organism has started to evade vaccination protection in a way similar to antibiotic resistance, with new genetic strains appearing that the vaccines do not protect against. Another reason is that the vaccine wanes in protection quickly, leaving previously vaccinated adolescents and adults as the main source of pertussis. As well, vaccinated children can still be infected with the pertussis bacterium, but their symptoms are milder that classical whooping cough. This makes them infectious but still able to attend school and circulate in the community, whereas children who develop typical whooping cough stay home and have low capacity to infect others.

The problem with whooping cough is that the vaccine is not working, not that there are too many unvaccinated children.”
Sydney Doctor, North Shore 29/4/2017

The Australian Health Department explains why whooping cough is being passed from fully vaccinated nurses to newborn babies in hospital.

Professor Peter McIntyre, Child and Adolescent Health, Children’s Hospital, Westmead, National Council for Immunisation Research and Surveillance (NCIRS) states,
“It is a little bit of a myth that there are these terrible disease risks that other children who are in the childcare would be exposed to from an unimmunised child.”
https://www.doctorportal.com.au/mjainsight/2017/18/no-jab-no-pay-does-it-actually-work/

Vaccination risks cannot be denied. The US vaccine compensation program has paid out over $3.4 billion to families of those killed or injured by vaccines. Australia still refuses to set up a compensation program – even though the mainstream legal system is cost-prohibitive and ill-equipped to deal with damage and death cases.

Until vaccinations can be proven safe and effective, and children vulnerable to damage can be pre-identified, all discrimination on the basis of vaccination status is completely unacceptable.

SO…COME ON AUSTRALIA!!
HAVE A VOICE BEFORE THE STATES VOTE ON NO JAB NO PLAY!

SYDNEY RALLY
FINAL MEGA-RALLY FOR THE WHOLE OF AUSTRALIA BEFORE COAG ON 9 JUNE!

4 thoughts on “AUSTRALIA-WIDE PROTESTS AGAINST NO JAB NO PLAY!”