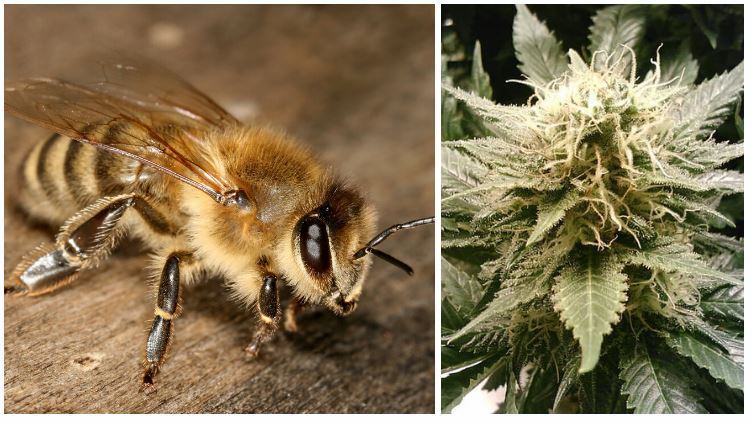 Bees are major fans of hemp and a recent study has found that the taller the hemp plants are the larger the number of bees that will flock to it.

The new research, spearheaded by researchers at Cornell University and published last month in Environmental Entomology, shows that humans aren’t the only fans of weed. The findings also reinforce a study published last year at Colorado State University that discovered the same thing.

The study shows how bees are highly attracted to cannabis due to the plant’s plentiful stores of pollen, and it could pave the way for scientists to figure out new ways to support their struggling population as well as floral populations.

According to the study, the greater the area covered by the hemp plant the greater the chance that bees will swarm to the area. Additionally, those hemp plants that are taller have a much greater likelihood of attracting bees with the tallest plants attracting a stunning 17 times more bees than the shortest plants.

The study also found that as time went on greater amounts of bees visited the hemp plots on a more frequent basis. It sounds almost like the word-of-mouth effect among humans who hear about great deals at a dispensary, no?

The researchers also discovered that hemp, a major cash crop with multiple applications, can support no less than 16 different varieties of bees in the northeastern United States.

The findings may seem strange considering that cannabis doesn’t produce the sweet, sugary nectar that your typical floral varieties produce to attract insects. Nor does hemp flower come in the dazzling array of bright colors that likewise attract bugs. However, the pollen produced by male flowers is highly attractive to the 16 bee subspecies in the study for reasons that remain unknown.

Female flowers—the kind that humans like to smoke for its intoxicating and soothing effects—are basically ignored by bees since they don’t produce any actual flowers.

“The rapid expansion of hemp production in the United States… may have significant implications for agroecosystem-wide pollination dynamics.

As a late-season crop flowering during a period of seasonal floral dearth, hemp may have a particularly strong potential to enhance pollinator populations and subsequent pollination services for crops in the following year by filling gaps in late-season resource scarcity.”

What makes the findings so compelling is the crucial impact it could have on suffering bee populations across the United States.

Bee are perhaps one of the most important managed pollinators in U.S. agriculture. Spreading the male sex cells of flowers to their female counterparts in a natural process that is highly crucial to plant reproduction.

According to the UN Food and Agricultural Organization, pollinators are worth anywhere from $235 and $577 billion worldwide owing to their pivotal role in the production of global crops. In the U.S. alone this means that bees are responsible for $20 billion of domestic crop production. Without bees we can kiss almonds, blueberries, watermelon, and other crops goodbye.

The authors of the study made clear that the combination of bees plus hemp won’t mean that folks should worry about cannabinoid-rich pollen sneaking it into their diets nor will the bees start producing honey enriched with tetrahydrocannabinol (THC)—as nice as that sounds.

Likewise, the presence of cannabinoids like THC in hemp pollen is “not likely to have an impact on bee development due to the loss of cannabinoid receptors in insects.”

So while we often like to focus on the recreational or medicinal use of marijuana—in its edible, smokeable, and vape-able forms—this new research shows that the plant can in fact help nature and agriculture in amazingly important ways.