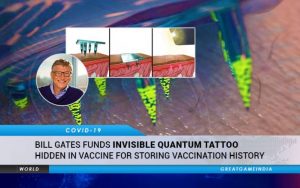 A project funded by Bill Gates aims to deliver an invisible quantum tattoo hidden in the coronavirus vaccine for storing your vaccination history. The researchers showed that their new dye, which consists of nanocrystals called quantum dots, can remain for at least five years under the skin, where it emits near-infrared light that can be detected by a specially equipped smartphone.

Funded by Bill Gates, Massachusetts Institute of Technology (MIT) researchers have developed a clandestine way to record your vaccination history: storing the data in a pattern of dye or tattoo ink, invisible to the naked eye, that is slipped under the skin hidden in your vaccine.

“This technology could enable the rapid and anonymous detection of patient vaccination history to ensure that every child is vaccinated,” says Kevin McHugh, a former MIT postdoc who is now an assistant professor of bioengineering at Rice University.

The researchers showed that their new dye, which consists of nanocrystals called quantum dots, can remain for at least five years under the skin, where it emits near-infrared light that can be detected by a specially equipped smartphone.

McHugh and former visiting scientist Lihong Jing are the lead authors of the study, which appears today in Science Translational Medicine. Ana Jaklenec, a research scientist at MIT’s Koch Institute for Integrative Cancer Research, and Robert Langer, the David H. Koch Institute Professor at MIT, are the senior authors of the paper.

To create an “on-patient,” medical record, the researchers developed a new type of copper-based quantum dots, which emit light in the near-infrared spectrum. The dots are only about 4 nanometers in diameter, but they are encapsulated in biocompatible microparticles that form spheres about 20 microns in diameter. This encapsulation allows the dye to remain in place, hidden under the skin, after being injected along with a vaccine.

The researchers designed their dye to be delivered by a microneedle patch rather than a traditional syringe and needle. The microneedles used in this study are made from a mixture of dissolvable sugar and a polymer called PVA, as well as the quantum-dot dye and the vaccine. When the patch is applied to the skin, the microneedles, which are 1.5 millimeters long, partially dissolve, releasing their payload within about two minutes.