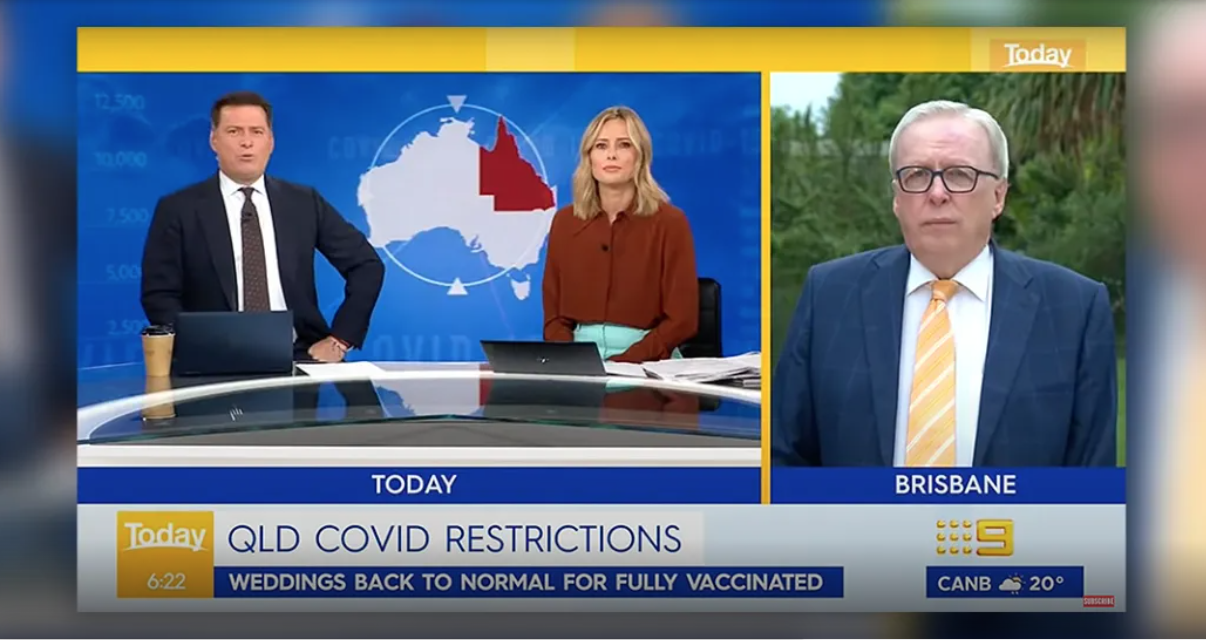 “Life will be miserable without being vaccinated. You won’t be able to hide… you are going to have a very very lonely life,” warned Queensland AMA president.

Nothing could be more effective at properly waking you up in the morning than watching a video of the president of the Australian Medical Association in Queensland, Chris Perry, saying the following words on national television:

The statement above was immediately preceded by one of the most outrageous, patronizing, and heartless comments I happen to come across during this whole pandemic – and I came across a lot of bad things over the last almost two years. As a prelude to Dr. Perry’s words, Karl Stefanovic, one of the hosts of the morning TV show ‘Today’, uttered the following words:

“Smart play from the Premier. There is no doubt about it that you have to try to get people to lose something in order to get something (chuckle). And look, there are going to be dramas, I am sure, especially around the Gold Coast area but there is only one decision for people to make”

In some ways, compared to other parts of the country, it has been quite easy to navigate this pandemic living in Queensland. It is true there were some opportunities where the state government has shown its true colours – like in the case where an unborn baby died because the mother was unable to cross the NSW’s border to access a QLD hospital and Premier Palaszczuk said her infamous phrase “Queensland hospitals are for Queenslanders” – but, overall, people living in the sunshine state have been experiencing a toned-down version of the pandemic measures seen in NSW and VIC, for example.

Nevertheless, all of this has now changed significantly. As the state prepares to open its borders in December, a fear campaign was launched. Among press conferences where one could hear things like “The virus will hunt you out” if you are unvaccinated and “People deserve to know that they can go to these places and that they are safe” from the unvaccinated, on the 9th of November, the state Government announced that “fully vaccinated Queenslanders will be rewarded to keep our freedoms from 17 December or when we reach the 80% double dosed milestone”.

It took a little bit longer, but here we are Queenslanders. Segregation has been announced and we are going to increasingly witness more and more the evil effects of the upcoming divisive policies that are going to be implemented. People will continue to lose their jobs, businesses will suffer, and countless families will be harmed. So far, almost fifty thousand people became unemployed because of coercive measures implemented across the country and hundreds of thousands, if not millions, have been vaccinated against their will to continue to provide for themselves and their families.

How does that work? Does the virus take a break at those specific venues described above? How can that not be just a clear way of making life impossible to the unvaccinated until they bow before the almighty state who knows what is best for the life of its citizens?

Queenslanders, fight against having a “freedom day” stain in your history

Queenslanders, although the clock is ticking and the ball is rolling, it is not too late yet to do something. Is this the future you want for your state? Is this the future you want for your country? As a nation, we have a history of always siding with the underdogs, please, let us continue on that path. Let us fight against having a “freedom [read: segregation] day” in the history of our state. Let us fight, perhaps, to even lead the nation out of this tyrannical mindset that has engulfed our country and plunged us into a type of intellectual and social subjugation which rivals some of the worse periods of the dark ages.

Queenslanders, you are free to say ‘no’. There are people, even some important people, already speaking up against this madness. Surely, if just a minority opposes this tyrannical governmental overreach, there is little hope of success, but if all those who, deep down inside, know that something is not right, if all those people decided to say ‘no’ to those upcoming policies, there would be nothing that could really be done by the state government.

In small groups, almost one by one, we have been divided by careful and calculated strikes. It is time to put an end to this. There couldn’t be an any better time than now to put an end to this. It is time for Queenslanders and Australians to, once again, unite. Even if you are comfortable for now, even if those tyrannical measures haven’t reached your life yet, believe me, tomorrow, it may be you. The circle of destruction is widening and, at some stage, you will be affected by it.

As a Brazilian by birth, someone who was born on the year a dictatorship in the name of safety ended in my country, I have always had a dear appreciation for the warnings penned by the German Lutheran pastor Martin Niemöller:

Churches, I have a special appeal to you. As a minister of Christ myself who has lost his job because of not agreeing to support measures that promote segregation introduced in the church setting, I beg of you, please, stand by the side of hundreds of thousands who are being marginalized right now. Stand by the side of those who are going to become second-class citizens. If watching what is taking place in other states hasn’t been enough to stir you up yet, now the threat is real and evil is in the house.

Stand and fight for your flocks and for the people of your communities. Let them know they are not alone. Let them know we will sit with them in the gutter any day of the week. Let those who are been ostracized and despised know that they are NOT going to live a “very very lonely life”. Speak against this false gospel of “Life will be miserable without being vaccinated”. There are many who need you right now to speak for them. “Speak up for those who cannot speak for themselves, for the rights of all who are destitute. Speak up and judge fairly; defend the rights of the poor and needy” (Proverbs 31:8-9).

I believe Queenslanders can start to write a different story for their state, in fact, for their nation. Although there are many voices out there growing more and more vicious by the minute saying things like “there is only one decision for people to make”, don’t believe them. When it comes to any medical treatment, there is only one decision a person must make: the decision that the individual is comfortable with. We, the people, are stronger. We have always been. Nurses, teachers, stay at home parents, business people, students, workers, etc., YOU are Queensland. You are the ones building this state, but sometimes our leaders can forget that.

Let us remind them by saying ‘no’ to the evil of medical apartheid that is trying to creep in.

Let us remind them by saying ‘no’ to anything and/or anyone who seeks to place even one single Queenslander into a sub-category of citizenship.

Let us remind them by saying ‘no’ to this stain in our history.

Let us remind them that we are Queenslanders!

5 thoughts on “Brace Yourself, Australia, It Is Game on Against Segregation”