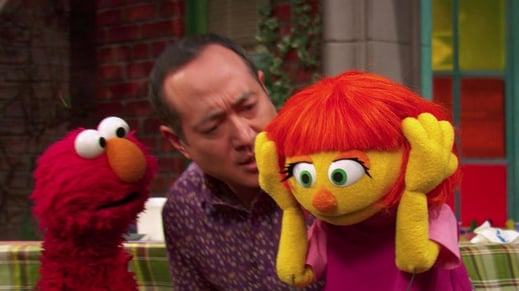 Sesame Street has changed with the times. So it’s not surprising that the nearly 50-year-old kids’ TV show has noticed that its audience has changed somewhat and it’s innovating to meet the latest trend.

On April 10, Sesame Street will officially debut its newest character, a Muppet four-year-old with bright orange hair, a pink dress and a toy rabbit called Fluffster, in a special episode called “Meet Julia.”  Julia is autistic.  She doesn’t respond to Big Bird’s greeting. She likes to playnext to Elmo rather than with him. Julia flaps her arms sometimes, she repeats phrases, covers her ears and gets distraught at noises.

“We wanted to address autism in general because of the growing number of children who are diagnosed with autism spectrum disorder,” Sherrie Westin, EVP of global social impact and philanthropy at Sesame Workshop, the non-profit behind Sesame Street, told the Guardian.

Did you notice that Westin didn’t mention the actual numbers? Officially, one in 68 American children is “on the spectrum” these days. That’s one brain-damaged child for every other classroom, at least.

Back when Sesame Street first aired, in 1969, nobody had even heard of autism. It would be more than a decade before even psychiatrists heard of it and added “infantile autism” to their diagnostic manual. Autism didn’t enter the public consciousness until 1988 when Tom Cruise and Dustin Hoffman made Rain Man, a movie about a rare genius who could regurgitate facts with mathematical precision but couldn’t tie his shoes – he was more savant than autistic really, but nobody knew the difference because then autism still affected only one in 10,000 American children. There were virtually no autistic kids watching Sesame Street. In the early 1990s autism suddenly quadrupled to one in 2,500, and it continued to soar, year on year, doubling and tripling, until now that autistic children are so abundant, they need a Muppet to represent them.

“The chances of a little kid two, three, four-years-old having some kind of a relationship with another kid with autism is pretty high,” CBS interviewer Lesley Stahl said on a 60 minutes show about the new Muppet.

“Especially once they hit school age, because they’ll be in their classrooms,” agreed Sesame Street writer Christine Ferraro who has been with the show for 25 years while ASD diagnoses multiplied.

“It was an opportunity to help explain autism and to help increase awareness and understanding.”

So the show features little Julia behaving oddly and the script tries to get children used to this new feature of their society – to accept it as a little diversity to tolerate or better yet, another colour in the big rainbow of life to appreciate.

“You’re bouncing up and down like a rubber ball,” says one Muppet character to Muppet Julia.

“And that’s just okay,” says a laughing CBC anchor remarking on the show. The whole idea is to make autism fun and “just okay.”

I’m guessing little Muppet Julia won’t be smearing feces on Sesame Street’s walls then? Or banging her head on the floor like some autistic kids do. Or crying in agony from gut pain – bowel disorders are one of the many “comorbid” conditions of autism. Will she have regular epileptic seizures – they affect one in four autistic children, you know?  Does the Muppet develop an autoimmune disease that goes along with autism and is now a leading cause of mortality in girls and young women.  Is there going to be a “Self-Injuring Julia” on the market beside “Tickle-Me-Elmo”?

I’m not being cruel.  I’m thinking it’s cruel for a television program and the media to normalize and trivialize a neurodevelopmental disorder that is plaguing our children today and the epidemic of illness that goes beyond autism — that has 43 percent of American children sick with a chronic illness.

I’m wondering why a children’s philanthropic organization isn’t outraged about a tragedy that causes children pain, robs them of their childhood and their potential, devastates their parents, exhausts their families financially and emotionally and frequently tears them apart.  Why isn’t it demanding answers for this epidemic from public health officials who still claim to not have a clue what is causing it?

And why, like those same public health officials, is Sesame Street and CBS and all the other mainstream media expecting us to embrace little normal Muppet Julia while it ignores the thousands of parentswho know exactly what caused their child’s autism? The thousands who describe almost identical accounts of fever and seizure or illness, then regression into autistic symptoms that began shortly after a visit to a doctor’s office – and an injection. Or more than one injection, because children today get 50 doses of 14 powerfully immune-system altering vaccinations that doctors barely understand, by age six.

Why is Lesley Stahl smiling and reporting a saccharine Muppet story like it’s real news when a top scientist at the CDC named William Thompson has admitted that he and his colleagues colluded to obscure and then shredded data which showed a link between autism and the MMR vaccine? “Oh my God, I can’t believe we did what we did,” Thompson said to Brian Hooker, a bioengineer professor at Simpson University and the father of an autistic child – on tape. Why isn’t 60 Minutes blowing the whole story open for the nation to see the corruption and the child abuse that results?

Why is there no mainstream media reporting on a study released this month in the preeminent vaccine industry journal finding that nearly one in 100 children who gets a measles vaccine visits an emergency room with a spiking fever, seizure or rash within two weeks of the shot?

Why is there no CBS special report on our efforts to expose the dangers of aluminum in childhood vaccines – the potential for the neurotoxic metal to migrate to brains, to stay there and to do damage? And aluminum’s links to autism? Where is the CBC and theGuardian reporting on the World Mercury Project’s press conference raising concerns about toxic mercury in vaccines? Or their story contaminants in vaccine manufacturing process that endanger children?

If even a fraction of these scandals are true, Sesame Street is part of a very large child abuse paradigm. It’s an enabler that harms the victims of abuse further by pretending everything they suffer is “normal.”  Their pain is a Mr. Snuffleupagus; it’s real but nobody ever sees it.

The exploding autism epidemic is a crime and a tragedy. Those who perpetuate it with fraudulent science, propaganda and false facts are the puppets (or worse). The companies that profit from expanding schedules and mandates are complicit, but so are the media and philanthropic organizations that promote them.

But the truth is getting harder and harder to hide. Maybe Julia the autistic Muppet will wake some parents up to the reality of vaccine injury that is increasing all around them, not  inure them into accepting a next wave of damaged children as normal.