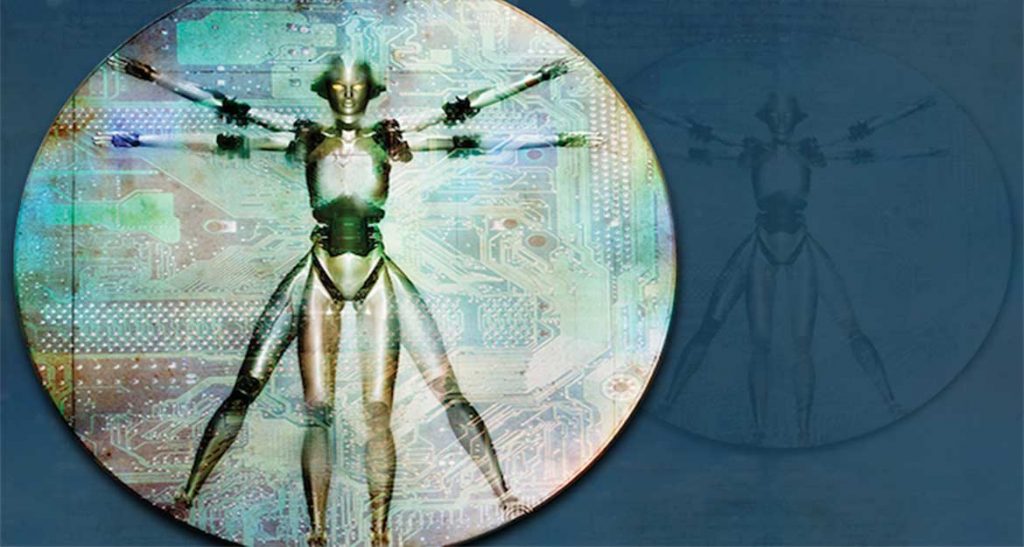 Before I drop some rather shocking vaccine information on readers relative to Artificial Intelligence [AI] and Transhumanism, and how most of today’s technologies are structured toward programming the human brain/mind to become a part of AI, let me just say that when I studied human nutrition, pregnant women were advised not to take any sort of medications, including aspirin! What’s happened that today, mothers-to-be are shot up with several vaccines?

A well-qualified and learned physician, Dr Graham Downing, who is a Neuro-musculoskeletal and Functional Medicine consultant in the UK, was interviewed on The Richie Allen Show posted November 24, 2016 where he dropped scientific information about how vaccines work in pregnant women, their fetuses and in vaccinated infants.  Those disclosures are something no one would want not to know, I think, as Dr Downing’s statements about the published science involved point to why so many vaccines apparently are being invented and will be mandated for all humans.

Here’s a hint: Vaccines may be part and parcel of the New World Order’s agenda for Artificial Intelligence and Transhumanism!

As Dr Downing points out, vaccinating pregnant women induces and/or creates inflammation in their bodies and also increases the risk of releasing inflammatory markers in their fetuses/infants. Such releases include phenotypes [the set of observable characteristics of an individual resulting from the interaction of its genotype with the environment (1)].

Furthermore, Doctor contends that from vaccines there’s an increase in inflammatory cells, which also are elevated in the fetal brain where cytokines release glutamates.  The prefrontal lobes and the limbic system, which involves human emotions, are affected in fetuses from pregnancy vaccines administered to moms-to-be.

According to Dr Downing, vaccines damage the front part of the brain!  Aluminum, aka aluminium, a vaccine adjuvant in four formulations, prohibits glutathione production which is needed for detoxification.  Furthermore, a pharmaceutical-created-enzyme-deficiency prevents detoxification capabilities for baby.  Purkinje cells in the brain also are damaged.

Another ‘tool’ in the AI project is computers, the computer tablet, and their games ostensibly designed to be addictive!  They decrease the frontal brain activity, according to Dr Downing.  All those computer games on phones and iPads ‘inadvertently’ have a ‘designed or accidental purpose’ in addition to being entertainment.  Those computer games apparently decrease frontal lobe and the anterior cingulate cortex activity, creating “a mess in the brain,” he says.

One of the scary points Dr Downing makes is that cell phones are creating social problems by messing with human brains.  [Microwaves cause electromagnetic frequencies that impact the human brain greatly and their damage is called non-thermal adverse health effects, I offer.]

How does the Artificial Intelligence Agenda fit in?

Is AI a deliberate agenda or is it for corporate profits, Dr Downing asks.   Dr Downing says there are five year and fifteen year goals for AI.  The fifteen year goal is to have AI run everything, including humans!  You have to listen to his comments about that aspect—one word: “frightening!”   To ‘authentic’ his remarks, Doctor cited a report issued by the White House, “A Federal Vision for Future Computing: A Nanotechnology-inspired Grand Challenge.”  Here’s what that 15-page report is about:

Create a new type of computer that can proactively interpret and learn from data, solve unfamiliar problems using what it has learned, and operate with the energy efficiency of the human brain. [3]

[Basically, it’s an artificial brain to replace the human brain.  Also, they want to create a new soul for humans, too!]

What does that tell you?

However, Dr Downing says that Stephen Hawking [4] supposedly is afraid of Artificial Intelligence: “potentially more dangerous than nukes.”  And we will allow that to happen to us and our children?

How about “artificial intelligence for autistic kids”!

Ostensibly and according to Dr Downing, today’s humans are an obsolete version of Silicon Valley’s dream of what humans ought to be.  Do you consider yourself obsolete?

You can hear Dr Downing’s scientific discussion about vaccines, pregnancy and the Artificial Intelligence—Transhumanism agenda on the “Unborn Babies Being Prepared for AI and Transhumanism through Vaccines and Medicine” show in this video.

William Casey, former CIA Director (1981), supposedly said, “We’ll know our disinformation program is complete when everything the American public believes is false.”  If that were a prognostication of sorts, then what do you think about pregnant women mandated to receive vaccines; 24-hour-old neonates being injected with the Hepatitis B vaccine; and 2, 4 and 6-month-old babies receiving up to nine vaccines at one time in view of what Dr Downing says about brain damage from vaccines?

‘Vaccines are safe’ is the fraudulent-science-prone CDC and FDA’s mantra.

“There is a great deal of evidence to prove that immunization of children does more harm than good.” – Dr. J. Anthony Morris, Former Chief Vaccine Control Officer, US FDA

“The incidence of asthma has been found to be five times more common in vaccinated children.” – The Lancet, 1994. [6]

Why is the U.S. Congress stonewalling on its oversight duty concerning HHS, CDC and FDA regarding toxic vaccines and validly-documented, whistleblower-proven, scientific fraud at the CDC [8], and not rescinding the “get out of jail free” card it gave to vaccine makers in 1986?  In this short video, there’s more discussion about CDC fraud.

Other countries citizens can sue for vaccine damages; why has Congress disenfranchised U.S. citizens of our rights to legal redress for health damages under U.S. product liability laws?  Good question?!

Lastly: “social engineering” of vaccines and the false meme being constructed around them

November 21, 2016, New York University’s Langone Medical Center in NYC held its “Confronting Vaccine Resistance: Strategies For Success” conference, which Dr Suzanne Humphries, MD, of “Dissolving Illusions” fame attended, took notes and graciously shared with the VAXXED production crew’s Polly Tommey.  Dr Humphries contends the conference was about “social engineering of medical professionals” regarding the forcing of vaccine mandates upon parents and those who question vaccines.
The conference panel included pro-vax luminaries like Paul Offit, MD, co-inventor of a rotavirus vaccine; Senator Richard Pan, MD, the propelling force behind California’s draconian SB277; and Dorit Rubenstein Reiss, PhD, pro-vaccine acolyte [9] among others who waxed profusely about how to ‘sell’ vaccines—or should I say—force vaccines onto parents, especially those who have questions and take more of pediatricians and doctors office time!

After watching the 45 minute video of Dr Humphries’ debriefing of that conference, I think she may have been describing what may literally have been a ‘tar and feather anecdotal fest’ about those who question the supposed safety and fraud in vaccines.

By the way, Dr Humphries says that the medical term “herd immunity” has been nixed in favor of “community immunity,” which they are pushing to have 99 percent of the population conform to!

However, what many question is the FACT that medical doctors who have gone through the indoctrination process of medical school; earned their ‘stripes’ and degrees; passed the rigors of internship; and have pushed and injected vaccines experience a complete change of mind and heart to the point where, after being confronted by well-informed parents about the dangers of vaccines, even issue letters of apology to their patients.  Here’s one from Dr Rachael L Ross, MD, PhD.

Even the CDC had to issue an ‘apology’ of sorts about the flu vaccine.  In 2014 the warning went like this

How many readers know about or have seen the apology that CDC whistleblower William Thompson, PhD, sent to none other than Dr Andrew Wakefield, which is most revealing?, I’d say:

“I apologize again for the price you paid for my dishonesty.”

[To which Dr Wakefield replied:]

“I forgive you completely and without any bitterness.”

“I know you mean it and i am grateful to know you more personally.”

Just for the record: I, and just about every child in the 1940s when I was in grade school, contracted all the childhood communicable infectious diseases: Measles, German measles, Chickenpox—the ones I lived through, as did every child in school, on the block where I lived and never was there any scare tactic by the medical profession about death from Measles or any of the other ‘childhood diseases’!  Moms knew how to treat those diseases without antibiotics and the pharmaceuticals available today.  Do you believe that?!
As a matter of fact, mothers took their children to homes where kids had those diseases for ‘parties’ so their children could be exposed to them, contract them and get them over with during childhood, as they would “fine tune” the immune system and provide life-long immunity [not financially profitable for Big Pharma], plus females could pass along those benefits to their fetuses/children!  Not so today, since the mandated vaccines ‘castrate’ the immune system so everyone who’s been vaccinated needs to get booster shots [profitable for Big Pharma], per the mandated schedules of the CDC and FDA!

What a rasher of scientific bull and scare tactics has been served up to the medical community, gullible-believing parents, and legislators who enjoy Big Pharma’s lobbying gifts, but obviously don’t realize the harm they are doing to their constituents by accepting, endorsing and promoting deliberate scientific fraud [10-11] ginned up by the vaccine industry apparently everywhere.

Victims of HPV Vaccine in Japan Will Sue State and Vaccine Makers
http://www.thevaccinereaction.org/2016/04/victims-of-hpv-vaccine-in-japan-will-sue-state-and-vaccine-makers/