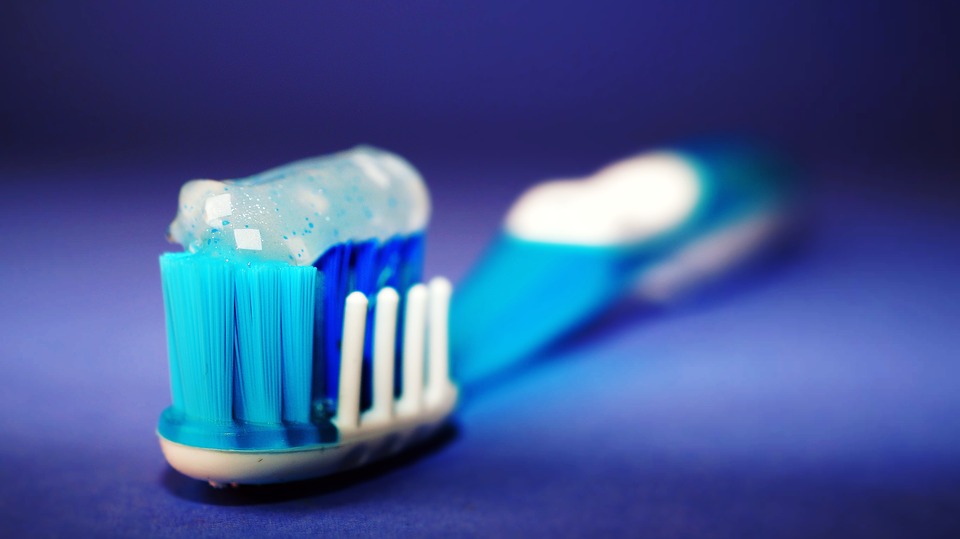 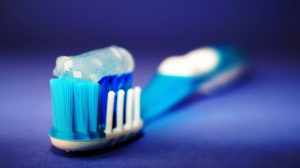 According to the U.S. Centers for Disease Control and Prevention1 (CDC), 40 percent of children between the ages of 3 and 6 use potentially dangerous amounts of toothpaste.

The CDC and American Dental Association (ADA) recommend using no more than a pea-sized amount for children in this age group, and those younger than 3 should use no more than the size of a rice grain on their toothbrush.

The problem with using excessive amounts of toothpaste has to do with the fluoride it contains. If you look closely, you’ll find fluoride-containing toothpastes have a warning on their label stating that “If you accidentally swallow more than used for brushing, seek professional help or contact a poison control center immediately.”

This warning was made mandatory for fluoride-containing dental products by the U.S. Food and Drug Administration in April, 1997.2

Ironically, while swallowing toothpaste is recognized as a cause for concern, we’re supposed to believe that drinking fluoridated water at any quantity is not only safe but beneficial for our teeth.

Too Much Fluoride Causes Dental Fluorosis

The fact of the matter is that fluoride is a toxic substance with no known biological imperative. Researchers have even questioned its efficacy as a topical anticaries prophylactic.3

The problem is, your teeth do not actually rely on fluoride for remineralization. What’s more, research4 has concluded that the protective shield fluoride forms on teeth is up to 100 times thinner than previously believed. It has long been believed that fluoride changes the main mineral in tooth enamel, hydroxyapatite, into a more-decay resistant material called fluorapatite.

However, the researchers found that the fluorapatite layer formed in this way is only 6 nanometers thick — meaning it would take almost 10,000 such layers to span the width of a human hair. As noted by the authors, “it has to be asked whether such narrow … layers really can act as protective layers for the enamel.”

Meanwhile, fluoride has been shown to cause significant systemic harm when ingested, which is part and parcel of the CDC’s new warning against using too much toothpaste. As reported by the Chicago Sun Times:5

“Brushing with too much toothpaste can damage enamel, as children could swallow too much fluoride while their teeth are developing, the CDC says. This can cause dental fluorosis, white marks and discoloration of teeth.”

However, dental fluorosis is just the tip of the iceberg when it comes to fluoride damage. For example, evidence shows fluoride is an endocrine disruptor that can affect your bones, brain, thyroid gland, pineal gland and even your blood sugar level.6 Importantly, it’s a known neurotoxin, shown to lower IQ in children.7

Most US Kids Have Fluoride-Damaged Teeth

According to research8 presented at the April 2017 National Oral Health Conference in Albuquerque, New Mexico, 57 percent of youth between the ages of 6 and 19 years have dental fluorosis, a condition in which your tooth enamel becomes progressively discolored and mottled.

When Fluoride Action Network (FAN) researchers analyzed the same set of data, they found over 21 percent of adolescents had moderate fluorosis and 2 percent had severe fluorosis.9

Incredibly, the situation is still worsening. According to the most recent data, which has yet to be published, the dental fluorosis rate in the U.S. may now be a staggering 65 percent.10

In stark contrast, when water fluoridation was first started in the U.S. in 1945, it was promised that only 10 percent of people would suffer from mild dental fluorosis at the then-recommended levels.11 Clearly, they were wrong.

In 2011, concerns over escalating fluorosis rates prompted the U.S. Department of Health and Human Services to lower the recommended level of fluoride in drinking water, from a previously recommended range of 0.7 to 1.2 mg/L to 0.7 mg/L.

However, adverse effects, including reduced IQ, behavioral alterations, neurochemical changes, hypothyroidism and attention deficit hyperactivity disorder (ADHD) have been demonstrated even at that lower level, so while it reduced exposure for many, the most serious risks remain.

What’s more, reduced IQ has been seen in study participants with higher urinary fluoride concentrations even when no dental fluorosis was present, which suggests the doses of fluoride that impair cognitive ability are far lower than those that cause severe dental fluorosis.12

Unfortunately, public health officials often brush off fluorosis as a purely aesthetic issue, one they believe is an okay trade-off for the supposed benefits of fluoride. In reality, dental fluorosis is an outward sign that fluoride is damaging the body in other ways as well.

Research has found impairment in cognitive abilities among children with fluorosis (even mild fluorosis) compared to children with no fluorosis, for example. Studies have also found that children with higher levels of fluorosis have increased rates of cavities13,14 — a finding that suggests more is definitely not better, not even when it comes to protecting against cavities.

Importantly, the CDC completely ignores the role fluoridated water plays in this epidemic, as toothpaste is by far not the only source of fluoride for young children, and probably isn’t the most significant source either.

In a January, 2019 study15 in the Journal of Clinical and Experimental Dentistry, the prevalence of dental fluorosis among 10- to 12-year-olds in three Ecuadorian provinces was nearly 90 percent.

According to the authors, “A positive statistical relationship and statistical significance was detected between dental fluorosis and consumption of bottled beverages.”

A “low negative” relationship between fluorosis and brushing with adult toothpaste without help suggests fluoridated water (used in bottled beverages) is likely to be a greater risk factor than toothpaste exposure, although toothpaste ingestion may still play a role.

CDC and Mainstream Media Ignore the Elephant in the Room

In response to the CDC’s toothpaste warning, FAN writes:16

“A spate of news stories … focused on kids swallowing too much toothpaste. But according to Paul Connett, Ph.D., FAN Director, ‘The defenders of water fluoridation are missing the real story. Dental fluorosis is a biomarker of over-exposure to fluoride and the ‘elephant in the room’ is what damage fluoride is doing to other tissues.’

“Recent scientific research indicates that exposure to fluoridated water may lower thyroid function17,18 and 350 published studies indicate that fluoride can damage the brain … While it is understandable that die-hard promoters of fluoridation should be fixated on any study dealing with teeth, it is less understandable why the media should ignore fluoride’s impact on the brain.

“The fetal brain is under attack from several environmental toxins19 but only one, fluoride, is deliberately added to our water. There are safer ways to prevent dental caries than exposing the fetus to a neurotoxicant … Repeating the dogma that fluoridation is “safe and effective” many times does not make it so.

“Connett urges more scientists to overcome this dogma and intimidation and review the brain studies themselves … fluoride-brain studies are readily accessible.20 Connett added that, ‘I believe that the intellectual ability of future generations depends on their willingness to do this. Neither intimidation nor dogma has a place in science or public health.’”

Protecting Your Dental Health Has Nothing to Do With Fluoride


When it comes to good oral hygiene and preventing cavities, it’s important to realize that drinking fluoridated water and brushing with fluoridated toothpaste is not the answer. It’s far more important to address your nutrition and basic oral care.

Here’s a five-step plan that can help you improve your oral health, without the use of toxic agents such as fluoride:

Aside from sugar, avoid carbs like beans, legumes and grains such as rice, quinoa and oats, as well as highly-processed grain products like bread, pasta, cereal, chips, bagels and fries. These begin digestion in the mouth and impact the health of your teeth the most.

Limit your daily fructose intake to 25 grams or less. Even fructose found in fresh fruit should be limited until you’ve normalized your insulin and leptin levels. If you’re already struggling with Type 2 diabetes or insulin resistance, consider restricting your total fructose to 15 grams per day until your insulin sensitivity has been restored.

Focus on eating a diet of fresh, whole foods, including grass fed meats and organic and fermented vegetables. This helps ensure you get plenty of minerals for strong bones and teeth. If needed, consider adding one or more nutritional supplements to support your oral health.

2. Brush twice or three times a day, 3 to 6 minutes after drinking and/or eating.

3. Use nonfluoridated toothpaste, or make your own. For example, you could simply mix coconut oil and baking soda with a pinch of Himalayan salt. High-quality peppermint essential oil can be added for flavor and cavity prevention. Start with a couple of tablespoons of coconut oil and baking soda, and add more of one or the other until you get an agreeable consistency. (Slightly firmer consistency tends to be easier to use.)

If buying non-fluoridated toothpaste, be sure to check the ingredient list for other harmful ingredients such as triclosan, sodium lauryl sulfate, propylene glycol, diethanolamine and parabens.

5. Pull with coconut oil once a day, ideally first thing in the morning, for five to 10 minutes to reduce bacterial growth, strengthen your teeth, reduce bad breath and lower your risk of gum disease.

To Protect Your Child’s Teeth, Bones and Brain, Avoid Fluoride From All Sources

For instructions on how to brush and floss properly, as well as oil pulling guidelines, see “Dental Dedication: Improve Your Oral Health.” In the video above, Bill Osmunson, a practicing dentist and staunch advocate against fluoride, also discusses some of the variables that contribute to good oral hygiene (summarized above).

Remember, by avoiding sugars and processed foods, you prevent the proliferation of the bacteria that cause decay in the first place. Following up with proper brushing and flossing and getting regular cleanings with a mercury-free biological dentist will ensure that your teeth and gums stay healthy naturally.

Many natural substances, such as vitamins C and K2, Coenzyme Q10 and homeopathic tissue salts such as silica, calcarea fluorica (calcium fluoride, not to be confused with sodium fluoride found in toothpaste), calcium phosphate and calcium carbonate, also have the power to improve the health of your teeth and gums.

Fluoride really has no major advantage, only hazards. And those hazards go far beyond the visible signs of dental fluorosis. Far worse is the damage that occurs inside the body, which you cannot see.

So, in addition to teaching your children about proper nutrition and oral care, be mindful about limiting their fluoride exposure from all sources, including toothpaste and other dental products, fluoridated water, fluoridated pesticides (and hence pesticide contaminated foods), bottled beverages such as juices and teas, fast food packaging, non-stick pots and pans, fluorinated drugs, fluoridated table salt and mechanically deboned chicken.

From the author: The existing medical establishment is responsible for killing and permanently injuring millions of Americans, but the surging numbers of visitors to Mercola.com since I began the site in 1997 – we are now routinely among the top 10 health sites on the Internet – convinces me that you, too, are fed up with their deception. You want practical health solutions without the hype, and that’s what I offer.