Video Frame by Frame of the vehicle windshield being shot segment.
During the “Supposed” Christchurch, NZ Shooting that has been reported by the “Fake News Media”, the shooter while driving from the scene of the crime, uses a shotgun to shoot the windshield of the vehicle he’s driving at “Point Blank” range, not once but Twice.

Fortunately the vehicle must of had a “Magic” windshield, after the First shot No damage can be seen, and after the second shot, only slight, negligible appears. During the second shot, ALL of the “Smoke” emitted appears in only “One” video frame and ALL of the ‘Smoke” magically disappears by the next video frame. Standard Video Frame Rates are taken at either 24, 25 or 30 video frames per second of time. 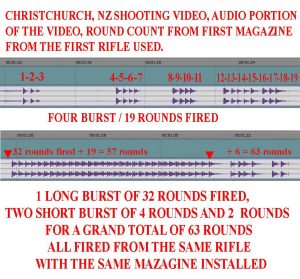 So I Copied the video of the “supposed” Christchurch,NZ Shooting and then opened the video in a Video Editor, this allows Frame by Frame examination of the video. The video is HIGHLY edited, filled with Video Compositing, a lot of very Obvious video editing.
The video is enough to Fool the Gullible and Naive Public, but it’s not a “Real” shooting, and you can Bank on it.

Here’s the first thing I noticed, the shooter, “Supposedly”, fired 63 rounds in 16 seconds, from a rifle that has a magazine with a capacity of only 20 – 30 rounds MAX. While changing magazines, he drops a long magazine for a smaller caliber rifle to the floor, then inserts a 20 round capacity magazine into the same rifle and then Miraculously, he fires 39 more times!
He makes Roy Rogers proud. (As a kid we used to joke about TV Western Stars like Roy Rogers who had revolvers and rifles that never seem to run out of ammo).

Donna and Hieu plug back in with me tonight to chat about  the live life claim and the incredible matrix like system that totally saturates every corner of our lives. You can find Hieu’s website here and can also contact him through the website if needed.  YouTube channel can be found here Related Posts:RESISTING TYRANNICAL[…]