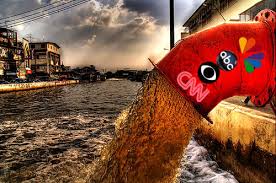 The victim of CNN’s latest bullying crusade is said to be a Reddit user who went by the handle name “HanA**holeSolo” (though this user has since deleted his Reddit account). CNN investigators apparently tracked down this user’s real identity and contacted him, warning that they would publish his name for the world to see if he refused to comply with the network’s demands.

According to The Intercept‘s Glenn Greenwald, the individual had also posted images to Reddit identifying all of the employees at CNN who are Jewish, depicting them with Jewish stars next to their name. CNN reportedly found this to be “racist” and “anti-Semitic,” and used this as justification for engaging in what Greenwald describes as a witch-hunt marked by “creepy, bullying” behavior.

Not long after this unidentified individual received contact from CNN, he suddenly issued a “lengthy public apology” to the network that many say was prompted by blackmail. CNNdenies this allegation, of course. But based on the timeline of events, it’s clear that CNNthrew its weight around to compel this Reddit user to grovel at the network’s feet in exchange for keeping his identity private.

In an article published by CNN, the failing network explained the decision to keep the Reddit user’s identity private occurred because the individual “said he is not going to repeat this ugly behavior on social media again.” It added that the statement “could serve as an example to others not to do the same.

When CNN was called on the carpet for this blatant act of coercion, not to mention an insane abuse of power, the network claimed that it never actually threatened the Reddit user. But CNN’s own article defies this claim, proving once again that CNN is a network completely devoted to publishing only fake news and lies.

Right in the last sentence of its article, CNN published this chilling quip that can only be interpreted as a threat, no matter how the network has tried to spin it:

“CNN reserves the right to publish his identity should any of that change.”

In other words, CNN is using this former Reddit user’s identity as blackmail to censor him from publishing his thoughts online. How the network plans to track him in order to enforce this threat is anyone’s guess. But if it had the capacity to track him down in the first place, then it only stands to reason that CNN has some kind of spy apparatus at its disposal that it uses to threaten anyone who crosses it.

“There is something self-evidently creepy, bullying, and heavy-handed about a large news organization publicly announcing that it will expose someone’s identity if he ever again publishes content on the internet that the network deems inappropriate or objectionable,” writes Greenwald. “Whether it was CNN’s intent or not, the article makes it appear as if CNN will be monitoring this citizen’s online writing, and will punish him with exposure if he writes something the network dislikes.”

For all intents and purposes, CNN is clearly acting in vengeance against the man who came up with the subject matter for President Trump’s most popular and “re-tweeted” social media post. The biased network has made it abundantly clear that no ethics violations are off limits when it comes to pursuing its enemies, which serves as yet another example of why this evil network needs to go, and quickly.