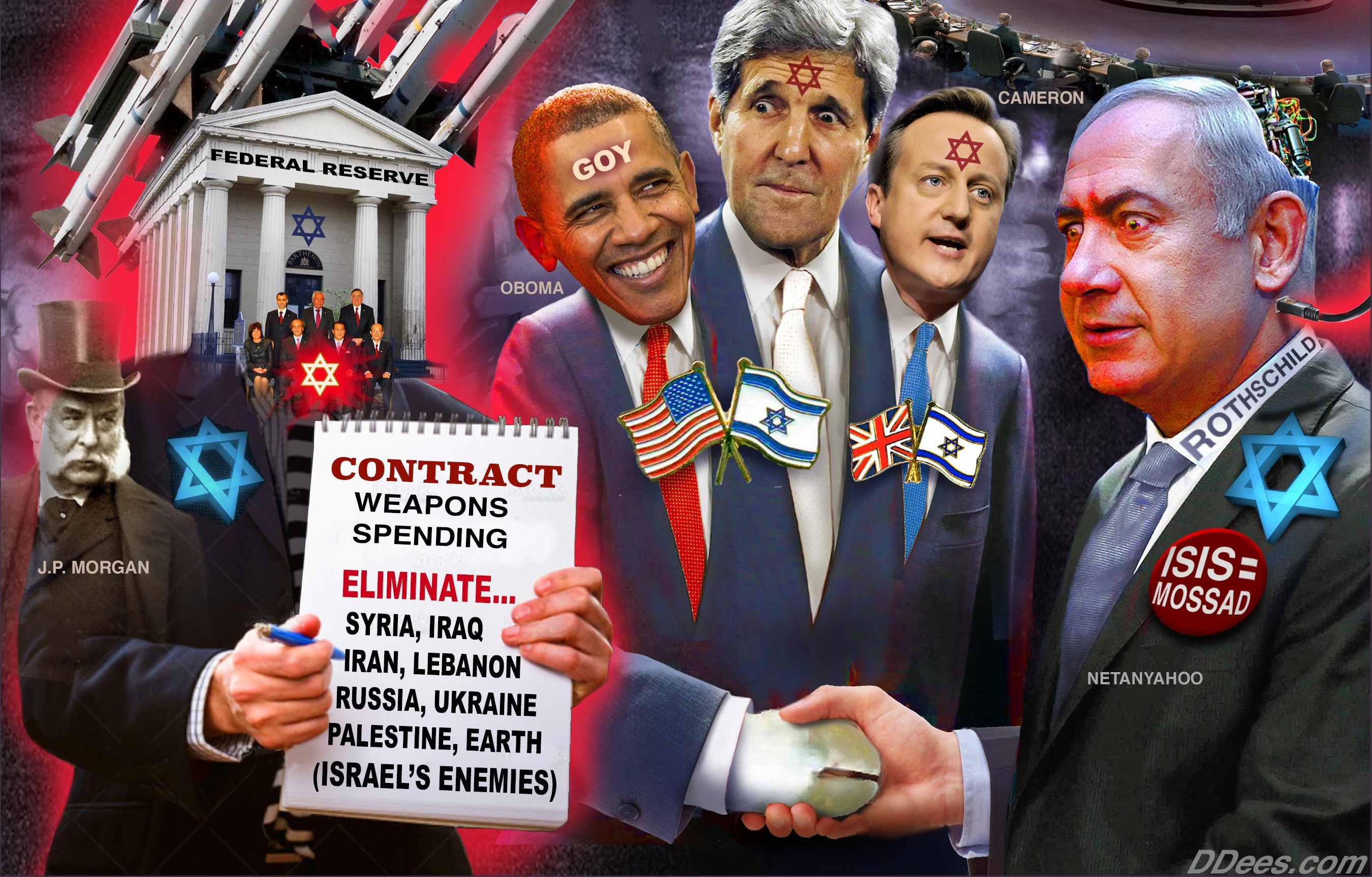 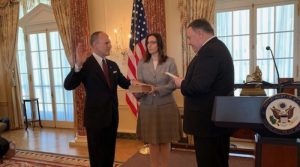 One of the most extraordinary displays of Jewish power in the United States took place in the State Department press briefing room on April 11th though it went virtually unreported in the mainstream media. It involved the introduction to the media of Special Envoy to Monitor and Combat Anti-Semitism Elan S. Carr, who had been sworn in earlier that day by Secretary of State Mike Pompeo. Carr, who will “lead United States policies and projects aimed at countering anti-Semitism throughout the world,” is a former Los Angeles prosecutor, who is, of course, Jewish, and ran for Congress in 2014 declaring that he was a “reliable vote for Israel.” He believes U.S. support for Israel should be “constant, unequivocal and bipartisan.” Carr speaks Hebrew, boasts about his visits to Israel every year and is a protege of GOP casino magnate and mega-donor Sheldon Adelson.

The State Department already has an Office of International Religious Freedom which inter alia seeks to “Promote freedom of religion and conscience throughout the world as a fundamental human right and as a source of stability for all countries” while also “identify[ing] and denounce[ing] regimes that are severe persecutors on the basis of religious belief.” It would seem that the International Religious Freedom office has all the bases covered, but there is apparently the Jewish exception rule that operates across the federal government and even at state levels. Jews, definable both as a religion and an ethnicity, clearly require more protection from government than other groups even though they are the most wealthy and politically powerful segment of the population both in the United States as well as in numerous European and Anglophone countries where they have a significant presence.

Here in America, Jewish organizations already benefit directly and grossly disproportionately as recipients of over 90% of Department of Homeland Security discretionary funds to protect their buildings and offices and such largesse is also the rule in countries like Britain and France. Holocaust education is mandatory in nearly all school districts, presumably to depict both Israel and Jews in a favorable light, and legislation to penalize or even criminalize any criticism of Israel is now in place in a majority of American states. Criticism of Israel is already regarded by the federal government as de facto anti-Semitism and anti-Semitism is itself considered a hate crime, subject to harsh penalties.

The United States is now committed to protecting Jews worldwide, with Carr putting it this way in a comment he made at a meeting of the Conference of Presidents of Major American Jewish Organizations in February, shortly after he was nominated: “My office was created by law and designed to protect the Jewish people throughout the world. Think about that. The world’s greatest power is focused, by law and design, on protecting the Jews.”

One is hard pressed to find in the Constitution of the United States some mention of the “law or design” that mandated protecting one particular ethno-religious group worldwide at taxpayer expense. Nor has there ever been a referendum on the question of whether Jews should be protected by Washington no matter where they live. Indeed, if there is a religious group that is facing extinction it is Christians in the birthplace of the religion in the Middle East, but there is little advocacy on the part of the U.S. government regarding their plight because it is Israel that has been actively engaged in creating unfavorable conditions for Palestinian Christians that eventually lead them to emigrate. It is called ethnic cleansing to make the Jewish state truly and completely Jewish. Ironically, Christians are better protected in neighboring majority Muslim countries Syria, Lebanon and even in Iran.

To be reminded once again just how powerful Jewish interests are in the United States, it is only necessary to examine some of Carr’s remarks. He is, of course, an opponent of the nonviolent Boycott, Divestment and Sanctions (BDS) movement which seeks to apply economic pressure against Israel to persuade it to end its colonization of the Arab West Bank and its ruthless suppression of the Palestinians.

Carr regards it as an “honor” to be sworn in to “fight against anti-Semitism, to the protection of the Jewish people throughout the world, and to the support for the Jewish state.” He intends to do that by “ focus[ing] relentlessly on eradicating this false distinction between anti-Zionism and anti-Semitism.” He elaborated that “…if there is an organized movement to economically strangle the state of Israel, that is anti-Semitic, and the administration has gone on the record for – as being opposed unequivocally to the BDS movement and the idea that somehow there can be movements organized to deny Israel its legitimacy and not to allow Israel to participate in economic commerce in the world – sure, that is. Hatred of the Jewish state is hatred of the Jewish people, and that’s something that’s very clear and that is our policy.”

Carr, responding to a question, also discussed what is now the U.S. government’s accepted definition of anti-Semitism, that “Criticism of the policies of any country, whether it’s the state of Israel or of the United States, is entirely proper and can’t be regarded as being inappropriate. However, as you may know, the International Holocaust Remembrance Alliance definition of anti-Semitism gives as a specific example the application of double standards to the state of Israel. And so if Israel is criticized in a way that no other country in a similar circumstance is criticized, yes, that is anti-Semitism.”

A journalist asked “Having covered the Israeli-Palestinian issues for – like many other people in this room – for a very, very long time, we know that U.S. former President Jimmy Carter did refer to Israel as an apartheid state, that it’s more of a human rights issue, especially with – in terms of policy. And a lot of things that the Trump administration has done – moving the U.S. embassy, recognizing the sovereignty of Israel over the Golan Heights – as not recognized under the international community. Can you tell me why you think Israeli settlements and a boycott, which was reminiscent of sort of South African sanctions issues and divestment, is an anti-Semitic issue specifically and not really one of more of a human rights or two peoples that need to get along?”

Carr responded: “I think any comparison between the state of Israel and apartheid is offensive to its core, and anyone who makes that comparison needs to check their facts. Israel is an exemplar of a democracy with democratic values, where all citizens of Israel not only vote but have representation in the Knesset, including, by the way, in the election we saw just yesterday. And so any notion that the state of Israel, which is a shining example of a democracy and a shining example of an American ally, one of our best allies – any suggestion that the state of Israel in any way, even remotely, reflects apartheid is offensive.”

Elan Carr is living on fantasy island, but he knows perfectly well that within the framework of the United States government he can say all the good things he wants about Israel while simultaneously labeling its critics as evil, even if you have to make things up, which he does when he claims repeatedly that BDS is seeking to “strangle” the Jewish state. He certainly knows perfectly well that hatred of the Jewish state is not hatred of the Jewish people but chooses to ignore the fact that Israel is criticized for how it behaves not because of what religion it claims to represent. If it is uniquely criticized it is because its record of war crimes is unique.

And Carr also should understand but clearly chooses not to, that criticism of Israel is not equatable to anti-Semitism but for the fact that he offers a definition designed to come to that conclusion. And even if it were so, there is that pesky thing called the First Amendment. Israel is no “shining example of democracy,” nor is it an ally of the United States. It is a perfect example of an essentially racist apartheid state, worse than South Africa was before it democratized, and it is also a parasite that has completely corrupted America’s body politic, which is why Carr has the position that he holds.

Finally, the United States has no moral or legal authority to police the world on behalf of international Jewry. It does not need a Special Envoy to Monitor and Combat Anti-Semitism to lead it on a crusade – dare I use that word in this context – to fix the world and make it a more comfortable and enriching experience for people like Elan Carr. American taxpayers should not be required to support this kind of entitlement nonsense, particularly as Israel and worldwide Jewish communities are wealthy and powerful enough to protect themselves without having to bleed the rest of the world by virtue of an unending victim narrative that generates a guilt trip relating to events in Europe seventy years ago. Will Americans ever arrive at a point where Israel and its diaspora helpmates like Carr will just leave the rest of us alone? One can only hope.

Philip M. Giraldi is a former CIA counter-terrorism specialist and military intelligence officer who served nineteen years overseas in Turkey, Italy, Germany, and Spain. He was the CIA Chief of Base for the Barcelona Olympics in 1992 and was one of the first Americans to enter Afghanistan in December 2001. Phil is Executive Director of the Council for the National Interest, a Washington-based advocacy group that seeks to encourage and promote a U.S. foreign policy in the Middle East that is consistent with American values and interests.

*(Top image: U.S. Special Envoy for Monitoring and Combating Anti-Semitism Elan Carr is sworn in (on a Hebrew Bible, or Tanach) by U.S. Secretary of State Mike Pompeo on April 11, 2019. Credit: Josh Katzen/JNS)