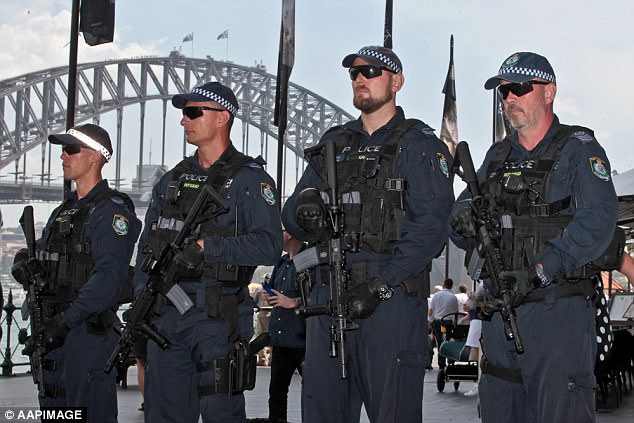 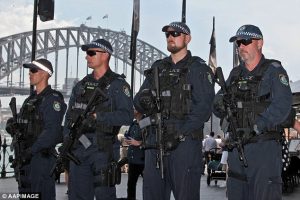 Note: A criminal police state is now in full swing while the general public walks around in a dream world, more concerned with gay rights & frappuccinos. Why aren’t they arresting the Bankers & corrupt political traitors who fund false flag terror events & mass immigration into Australia? Why are war criminals Howard, Blair & Bush not rotting away in prison? Who are the real terrorists now? the Australian public, get used to it.

Mr Fuller told to reporters on Monday that the elite police officers who would carry the weapon had completed a 10-day intensive training course.

‘We have to get use to it’ said Commissioner Fuller

‘There’s no point in us pretending the environment hasn’t changed – the organised crime environment, the terrorism environment’, he added.

The move – the latest in a series of key terror reforms in NSW – was flagged in June, mainly to resolve active armed-offender situations.

By June 2018, the entire riot squad – about 100 officers – will be armed with the high-powered weapons.

Mr Fuller explained that NSW residents need to adjust to seeing elite police officers carrying semi-automatic rifles as dozens of the weapons are rolled out in time for the festive period.

The armed officers are aimed to be deployed in active armed offender situations, such as terror incidents.

Deputy Commissioner Dave Hudson said the commissioner could also approve their deployment to large gatherings, including New Year’s Eve events, because of their deterrent effect.

‘That will be an assessment made on a case-by-case basis’, explained Mr Hudson.

‘Most overseas incidents occurred at distances over 25 metres, sometimes up to 100 metres, and the current Glock weapons weren’t as effective at that distance,’ he said.

To justify the new measure, he cited ‘a change in the environment over the last several months’ and a ‘need to think differently, we need to deploy differently’.

Mr Fuller agreed saying a change in the national terror threat level, which has remained at ‘probable’ since 2014, could mean the specialist officers would be deployed more often.

The upgrade for increased firepower comes after police in Victoria thwarted an alleged plot to use an automatic rifle to shoot as many people in Federation Square on New Year’s Eve.

‘I’m not a sensationalist either and we’re not going to have police patrolling with long-arms,’ said Commissioner Mick Fuller.

‘But if something happened tomorrow, I want people to know that we’re ready to go, we’ve got the capability ready to go.’

Since August 2015, different terror reforms have been taken in NSW.

In April 2017, the commissioner announced a fixated-persons unit of seventeen detectives allocated to target suspects not previously monitored under counter-terror initiatives.

Last June, police was granted with greater shoot-to-kill powers, including protection from criminal liability if they use lethal force “in good faith” during a declared attack.

The following month, federal changes were made to boost co-operation between police and the military, including a streamlined call-out process.

Last month, the Terrorism Bill 2017 was passed by the parliament