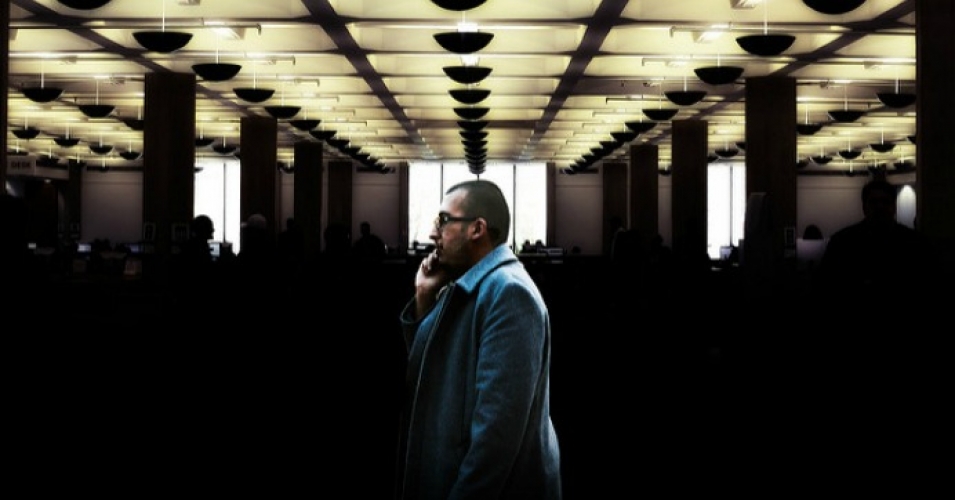 Canadian free speech advocates slammed recent revelations that Montreal police tracked a journalist’s cell phone calls, text messages, and locations in an attempt to identify one of his sources, who was leaking details of an internal police investigation.

La Presse columnist Patrick Lagacé, the target in the case, called the move “indefensible,” stating in aninterview on Monday that the approval of a warrant to spy on a journalist was “incredibly aggressive.”

“To me, this was a great pretext to try to investigate a reporter who has done numerous stories in the past that have embarrassed the service,” he said. “This is a big thing in a country like Canada. Police were permitted to spy on a journalist under very, very thin motives on a secondary part of a criminal investigation.”

Supporters of press freedom in Canada said it is part of a worrying “culture shift” brought about by the so-called anti-terror bill approved by Parliament last year, which gave extraordinary new powers to law enforcement agencies, including their ability to spy on civilians.

Tom Henheffer, executive director of Canadian Journalists for Free Expression, told CBC News, “The new powers that the police have to survey Canadians are absolutely horrifying, they’re basically limitless, there’s very little oversight, and when that happens the system will be ripe for abuse, and this is just an example of how it’s abused.”

“What’s even more worrying about it is the fact that this is a justice of the peace who actually authorized this,” he said.

Police reportedly monitored Lagacé’s iPhone for several months this year in order to find out the identity of his sources, apparently as part of an investigation into a crime that occurred within the police force. The probe was called Projet Escouade, and involved charges of fabricated evidence by officers involved in street gangs and drug trafficking operations. One of the officers being investigated apparently contacted Lagacé.

At least 24 surveillance warrants were issued that allowed police to track incoming and outgoing calls on Lagacé’s phone, as well as its location, although Police Chief Philippe Pichet denied that Lagacé’s GPS was being monitored.

Mark Bantey, a media lawyer, told CBC News that the revelations were “shocking.”

“I was stunned because the police obviously took the very drastic measures to obtain the source of information. I think it’s shocking actually. I think it’s a serious attack on freedom of the press in Canada,” Bantey said. “I have never seen anything like this in the 35 years I have been practicing media law. It is unprecedented. The police have issued search warrants against media outlets in the past, but nothing as far-ranging as this one.”

Henheffer also noted that Lagacé’s case is only the latest in which a journalist was targeted by police for information, pointing to an incident in September when Quebec provincial police seized Journal de Montréalreporter Michael Nguyen’s computer because they believed he had illegally obtained information for a story.

And Stéphane Giroux, a spokesperson for the Quebec journalists federation, told CBC that the scandal could chill free speech and discourage sources from reaching out to reporters.

Pichet claimed that “all regulations were followed” in the operation of spying on a journalist’s phone. 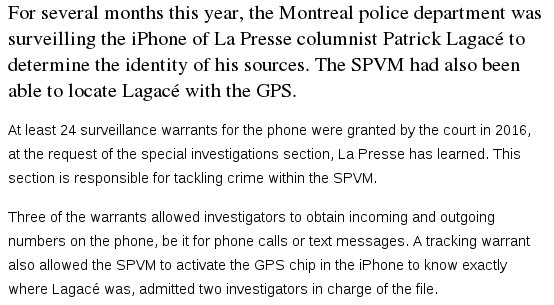 Are you a journalist? The police spying on you specifically to ID your sources isn’t a hypothetical. This is today.http://montrealgazette.com/news/local-news/montreal-police-monitored-iphone-of-la-presse-journalist-patrick-lagace …

This work is licensed under a Creative Commons Attribution-Share Alike 3.0 License. Nadia Prupis is a staff writer for CommonDreams.org, where this article first appeared.