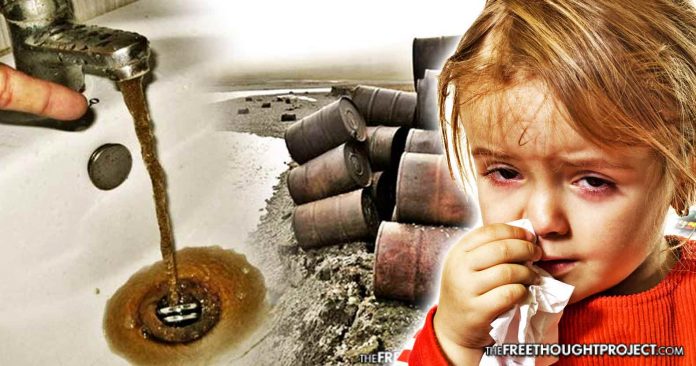 As the United States continues to increase the budget of the largest military in the world, Americans are paying a price that is far greater than their tax dollars—a recent study found that the Pentagon has contaminated more than 40,000 sites across the United States, exposing hundreds of thousands of Americans to dangerous chemicals.

An investigation conducted by ProPublica and Vox revealed that by testing and disposing of deadly chemical weapons in the United States, the Pentagon has “poisoned drinking water supplies, rendered millions of acres of land unsafe or unusable, and jeopardized the health of often unwitting Americans.”

The study noted that while the Pentagon has spent more than $40 billion in an effort to clean up the contaminated sites over the years, the results have been overwhelmingly inadequate, and many Americans are still at risk, even after the government claims that the sites have been rendered “safe” for public use.

In addition to using at least 200 sites as “burn pits” where they burn hazardous explosives in the open air, the Pentagon also pays independent contractors to dispose of hazardous waste and to clean up toxic sites. The investigation noted that, in some cases, the Pentagon has even refused to cooperate with the EPA and let dangerous sites remain toxic wastelands, because it claimed it is “not responsible when some of those contractors commit fraud, improperly handle toxic material, or cut corners on cleanups.”

As The Free Thought Project reported, while Congress banned American industries from using “open burns” to dispose of hazardous waste in 1984, a study from ProPublica in July revealed that lawmakers granted the Pentagon and its contractors “a temporary reprieve from those rules to give engineers time to address the unique aspects of destroying explosive military waste. That exemption has remained in place ever since.”

The latest installment in the investigation looks at the Research Development Explosive (RDX), which was created by the U.S. in the early 1940s. In addition to being considered a critical component in defeating Germany in World War II, the white crystalline powder was then used to fuel carpet bombing in Korea and Vietnam.

“The Americans called the new formula RDX, and it transformed weapons overnight. RDX enabled the bazooka—the world’s first hand-held anti-tank rocket launcher—to pierce armor. RDX was packed into 10,000-pound underwater bombs dropped by British airplanes to blow up German river dams and disrupt the country’s hydropower in the critical Dambuster campaign. It was even surreptitiously soaked into firewood that would later explode in the furnaces of German locomotives.”

At the time, more than 40 million pounds of RDX was produced each month at an industrial plant in rural Tennessee. The deadly, explosive powder was spread into the soil and later found in the area’s drinking water aquifers. The study noted that while RDX was designated as “a possible human carcinogen” in 1990, the Pentagon has continued to manufacture it and to test-fire the weapons it is made with on U.S. soil.

The Pentagon is the same government agency that claims it cannot account for more than $21 trillion from the last 20 years, and the latest discovery from ProPublica that more than 65 military installations across the country have been contaminated with a deadly chemical, is just another reminder that the Pentagon is not only killing innocent civilians in the Middle East—it is also poisoning innocent civilians in the United States, in the name of keeping Americans “safe.”