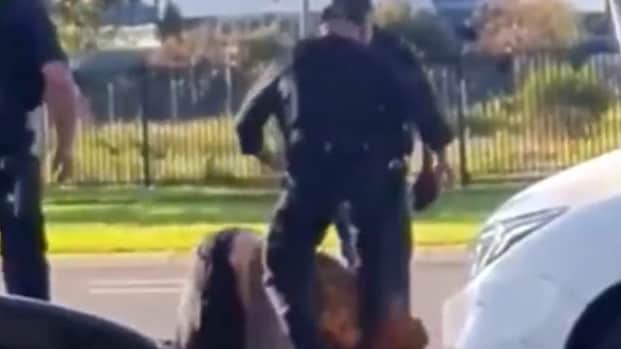 The father of a mentally ill man who was stomped on the head by police while being arrested at Epping says his son is now in a coma as a result of the incident.

An internal Victoria Police investigation is now underway after disturbing video emerged online of the arrest.

It shows six police officers pinning the man to the ground before one of them stomps of the man’s head.

“I couldn’t sleep last night, I was so upset,” he told Neil Mitchell.

Widespread community anger is growing over the forceful arrest of a man with bipolar disorder in Melbourne, who’s now been put into an induced coma.

He said his son was bi-polar and was in the hospital on Sunday waiting to see a doctor, but they didn’t have a bed.

He then bumped into a friend and went outside, when the incident unfolded.

“The police had no right to do what they did,” he said.

Click PLAY below to hear more on 3AW Mornings

One thought on “‘Disgusting’: Victorian Police Stomp On The Head Of A Mentally Ill Man”