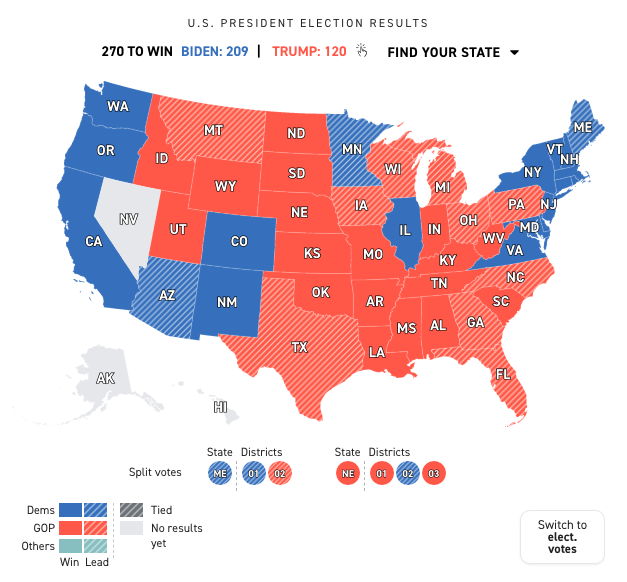 Why are the key battleground states all failing to report
the voting results in a timely manner—REALLY?!?! 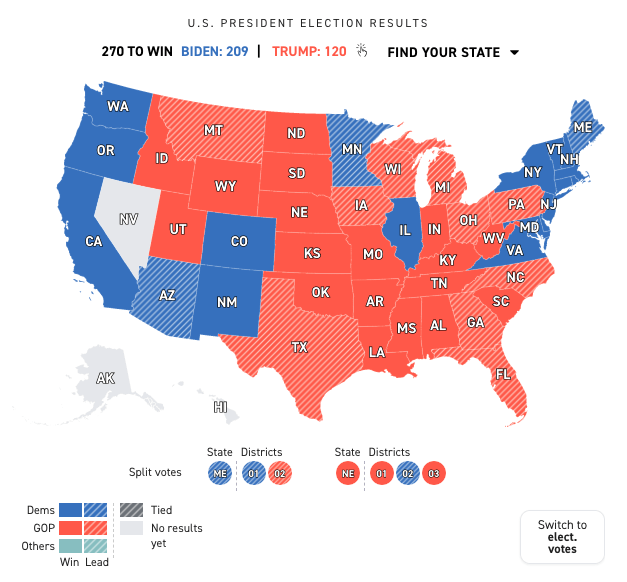 The election map from last evening posted above reveals the basic strategy by which the Democrats will attempt to steal this election.

Everyone knows what’s red is red and what’s blue is blue during a highly polarized election cycle like 202o.  The preceding map depicts that great political divide quite graphically.

However, what it also portrays is the Democrat election theft strategy that’s being employed in real time to steal the White House from President Trump.

Exactly what is that simple strategy to steal the POTUS ballot?

Because the whole world is watching the USA election crime scene as never before in recorded history, the perps knew they had to be super sly and stealthy in their tactics.

At the end of the day, there’s only so much the DEMs can do here and hope to get away with without triggering a full-blown federal criminal investigation into treason and sedition committed by the Democrat Party.

Therefore, the Democrat game plan is to flip the very states — KEY SWING STATES — that Trump took in 2016 … plus a few other small ones such a Arizona and Nevada for good measure.  For reasons that ought to be quite obvious by now, both traditionally red states North Carolina and Georgia may also be thrust back into play. See: The Patriot Movement Must Watch Out for Blatant Election Theft in These 5 States

So, this election steal will come down to the very same states the DNC attempted to steal on November 8, 2016 — Wisconsin, Michigan and Pennsylvania.  As a matter of historical fact, these are the same 3 states that 2016 POTUS candidate Jill Stein filed her lawsuit in to overturn the final results that favored Trump.

Trump WINS election; Democrats now working overtime to STEAL it by fabricating hundreds of thousands of votes in Michigan and Wisconsin

The Democrat, Deep State and NWO globalist co-conspirators will utilize different theft techniques and fraudulent measures in each of these 3 states of Pennsylvania, Wisconsin and Michigan.

As for Michigan, Gov. Gretchen Whitmer has been working overtime to use the current Democrat Secretary of State to fix the final certified vote in Lansing.  That’s easy when such a vicious and reckless governor is also a hardcore Trump hater; and she’s surrounded by senior state government leadership of the same ilk. See: Suddenly 138,000 Michigan Ballots Appear This Morning ALL FOR BIDEN, ZERO FOR TRUMP

Then there is Wisconsin.  This is where the ballot bandits will be extra special careful to commit crimes that are virtually undetectable.  Democrat Governor Tony Evers is not quite as partisan as the rest of the blue state guvs, so the steal will be a very cunning one indeed.  Most likely the election equipment or vote counting machines will be hacked in ways that are not discernible via the standard forensic investigations.

It’s critical to understand that the Trump campaign experienced an awesome voter response in all three of these crucial swing states.  The turnouts were as massive as they were unprecedented.  Hence, the real vote was surely a landslide victory for President Trump in Michigan, Pennsylvania and Wisconsin.  This data point will serve the Prez well in his various legal challenges.

KEY POINT: The New World Order globalist cabal knows that the best way to undermine the sovereignty of the American Republic, so that it can be subjugated to a One World Government that functions as a totalitarian global superstate, is to carry out their Ordo ab Chao election scheme.  For only with a sufficient level of chaos and confusion, tumult and pandemonium, can the globalists hope to impose the Biden-Harris communist regime on the American people.  Which is why this ELECTION CHAOS WAS MANUFACTURED ON PURPOSE.

What the electorate is about to witness is a slow-motion theft in each of these states, as well as in Arizona and perhaps one or two others, in order to pad an utterly fake Biden victory.

Precisely how are the Democrat election thieves and Deep State fraudsters doing it right now?

Trump knows in his bones that, the longer this drags on, the greater the likelihood the Democrats will outright steal this election.

3 thoughts on “ELECTIONgate: You’ve never seen anything like the ballot fraud and election theft perpetrated by the Democrats this week!”