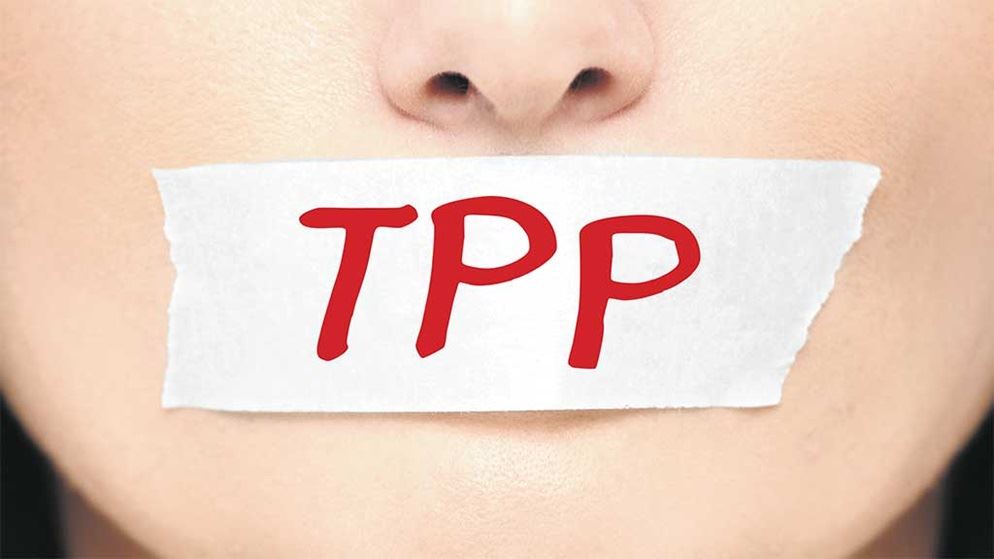 ‘President Obama has sold the American people a false bill of goods,’ says Friends of the Earth

Text released today confirms the TPP rolls back past public interest reforms to the U.S. trade model while expanding problematic provisions demanded by the hundreds of official U.S. corporate trade advisers who had a hand in the negotiations while citizens were left in the dark. (Image: File w/overlay)

“Worse than anything we could’ve imagined.”

“An act of climate denial.”

“A death warrant for the open Internet.”

As expert analysis of the long-shrouded, newly publicized TransPacific Partnership (TPP) final text continued to roll out on Thursday, consensus formed around one fundamental assessment of the 12-nation pact: It’s worse than we thought.

“From leaks, we knew quite a bit about the agreement, but in chapter after chapter the final text is worse than we expected.”
—Lori Wallach, Public Citizen’s Global Trade Watch

“From leaks, we knew quite a bit about the agreement, but in chapter after chapter the final text is worse than we expected with the demands of the 500 official U.S. trade advisers representing corporate interests satisfied to the detriment of the public interest,” saidLori Wallach, director of Public Citizen’s Global Trade Watch.

In fact, Public Citizen charged, the TPP rolls back past public interest reforms to the U.S. trade model while expanding  problematic provisions demanded by the hundreds of official U.S. corporate trade advisers who had a hand in the negotiations while citizens were left in the dark.

On issues ranging from climate change to food safety, from open Internet to access to medicines, the TPP “is a disaster,” declared Nick Dearden of Global Justice Now.

“Now that we’ve seen the full text, it turns out the job-killing TPP is worse than anything we could’ve imagined,” added Charles Chamberlain, executive director of Democracy for America. “This agreement would push down wages, flood our nation with unsafe imported food, raise the price of life-saving medicine, all the while trading with countries where gays and single mothers can be stoned to death.”

Major climate action groups, including 350.org and the Sierra Club, were quick to point out that the text was notable as much for what it didn’tsay as what for what it did. “The TPP is an act of climate denial,” said 350 policy director Jason Kowalski on Thursday. “While the text is full of handouts to the fossil fuel industry, it doesn’t mention the words climate change once.”

What it does do, however, is give “fossil fuel companies the extraordinary ability to sue local governments that try and keep fossil fuels in the ground,” Kowalski continued. “If a province puts a moratorium on fracking, corporations can sue; if a community tries to stop a coal mine, corporations can overrule them. In short, these rules undermine countries’ ability to do what scientists say is the single most important thing we can do to combat the climate crisis: keep fossil fuels in the ground.”

Furthermore, Friends of the Earth (FOE) said in its response to the final text, the agreement “is designed to protect ‘free trade’ in dirty energy products such as tar sands oil, coal from the Powder River Basin, and liquefied natural gas shipped out of West Coast ports.” The result, FOE warned, will be “more climate change from carbon emissions across the Pacific.”

International observers were no less critical. Matthew Rimmer, a professor of intellectual property and innovation law at Australia’s Queensland University of Technology and trade policy expert, told Fairfax Media it looks like U.S. trade officials have been “greenwashing” the agreement.

With its provisions that tie the hands of food inspectors at international borders and give more power to biotechnology firms, “the TPP is a giveaway to big agribusiness and food companies,” said Wenonah Hauter, Food & Water Watch executive director. Such corporate entities, she said, want to use trade deals like the TPP “to attack sensible food safety rules, weaken the inspection of imported food, and block efforts to strengthen U.S. food safety standards.”

Last month, the Center for Food Safety outlined the top five reasons “eaters should be worried about Obama’s new trade deal.” At the top of the list was the TPP’s ability to undermine efforts to label GMO foods. “More broadly,” the Center wrote in October, “any U.S. food safety rules on labeling, pesticides, or additives that [are] higher than international standards could be subject to challenge as ‘illegal trade barriers’.”

Indeed, according to Food & Water Watch, the final text released Thursday indicates that under a TPP regime, “agribusiness and biotech seed companies can now more easily use trade rules to challenge countries that ban GMO imports, test for GMO contamination, do not promptly approve new GMO crops or even require GMO labeling.”

“The TPP food safety and labeling provisions are worse than expected and bad news for American consumers and farmers,” said Hauter. “Congress must reject this raw deal that handcuffs food safety inspectors and exposes everyone to a rising tide of unsafe imported food.”

‘Death Warrant for the Open Internet’

“If U.S. Congress signs this agreement despite its blatant corruption, they’ll be signing a death warrant for the open Internet and putting the future of free speech in peril,” stated Evan Greer, Fight for the Future (FFTF) campaign director.

“If U.S. Congress signs this agreement despite its blatant corruption, they’ll be signing a death warrant for the open Internet and putting the future of free speech in peril.”
—Evan Greer, Fight for the Future

Among the “several sections of grave concern” identified by FFTF are those covering trademarks, pharmaceutical patents, copyright protections, and “trade secrets.”

Section J, which addresses Internet Service Providers (ISPs) “is one of the worst sections that impacts the openness of the Internet,” according to the digital rights group, which explained further:

This section requires Internet Service Providers to play “copyright cops” and assist in the enforcement of copyright takedown requests — but it does not require countries to have a system for counter-notices, so a U.S company could order a website to be taken down in another country, and there would be no way for the person running that website to refute their claims if, say, it was a political criticism website using copyrighted content in a manner consistent with fair use.

Section J makes it so ISPs are not liable for any wrongdoing when they take down content—incentivizing them to err on the side of copyright holders rather than on the side of free speech.

Like-minded groups in Canada, where newly elected Prime Minister Justin Trudeau has been on the job for all of one day, are sounding similar alarms.

Citing concerns about how the deal would impact human rights, health, employment, environment, and democracy, the Council of Canadians on Thursday demanded a full public consultation—including an independent human rights, economic, and environmental review of the document—before Trudeau goes any further. The group expressed particular concern over investor-state dispute settlement (ISDS) provisions, which allow corporations to sue states for lost profits, asking that they be excised from the deal.

“Trudeau is under a lot of pressure to adopt this deal as soon as possible, with calls already coming in from U.S. President Barack Obama and Japanese President Shinto Abe,” acknowledged the Council’s national chairperson, Maude Barlow. “But a thorough public review is needed before he can establish whether the TPP is truly in Canada’s interest.”

Or anyone else’s, for that matter.