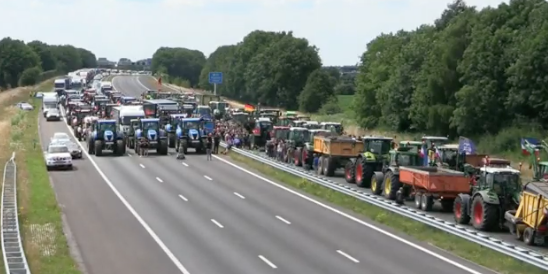 READ MORE AT THE WESTERN JOURNAL

Farmers in the Netherlands conducted several demonstrations this week against the country’s radical plans to slash nitrogen and ammonia emissions.

On Monday, farmers in their tractors blocked highways in multiple parts of the country and set fires near the town halls of Apeldoorn and Epe in Central Netherlands, The Associated Press reported.

Near Liessel — 93 miles from Amsterdam, the nation’s capital — a truck dumped large plastic-wrapped bales of hay on a stretch of highway.

Dutch authorities warned motorists of roadblocks as tens of thousands of farmers from all over the country congregated in Central Netherlands to protest the emission policies, according to The AP.

On Tuesday, farmers brought cows to the Dutch House of Representatives building at The Hague, Bloomberg reported. The farmers threatened to slaughter their livestock if the Dutch government adopted the nitrogen emissions cutback plan.

“If the nitrogen measures are adopted, one of these two ladies will not go home, but will receive a one-way ticket to the slaughterhouse,” Dutch farmer Koos Cromwijk told local news agency ANP, according to Bloomberg.

Later that day, some farmers clashed with police officers outside the home of Cabinet Minister Christianne van der Wal, who oversaw the Netherlands’ anti-pollution reforms. Protesters smeared a nearby street with manure, the Washington Post reported.

You can demonstrate, but in a civilized way,” Dutch Prime Minister Mark Rutte said at a Wednesday news conference in the backdrop of the 2022 NATO Summit in Madrid.

“So don’t block highways, don’t set off fireworks outside a minister’s house and spread manure and … scare two children, and endanger families,” Rutte said, according to the Post.

The protests continued through Wednesday and Thursday. Some protesters blocked the Dutch-German border, preventing the movement of people and goods until politicians addressed their concerns, The U.K’s Daily Expressreported.