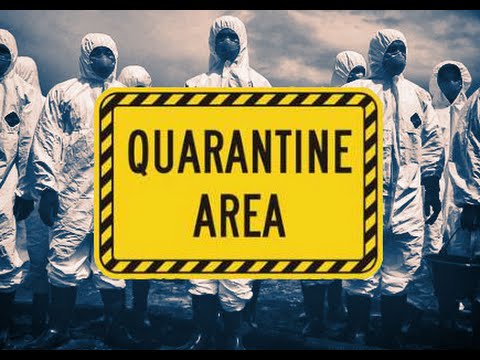 Forced quarantine is nothing new and has been going on for over a hundred years. What is new is the fact such authority has been pushed beyond reasonable limits.

In the modern world the ability to quarantine has been used to unfairly target families that don’t vaccinate. In recent outbreaks of mumps and measles students have been barred from school and told they could only return once they received their magical vaccine. Such tactics defy logic considering the person could already be infected and it takes several weeks for vaccines to mount an immune response–assuming that it works at all! The fact that outbreaks of childhood illnesses are happening in the vaccinated is also ignored, with the focus being placed on the unvaccinated.

The recent upgrade of powers to detain people will lead to forced vaccination and a witch hunt for those who are deemed disease ridden. The current mumps outbreak has people on social media calling for parents to vaccinate their damned kids. Posts blaming immigrants for outbreaks of minor illnesses are also quite common. This of course ignores the fact that people who immigrate to the United States or come as refugees, face the brutality of forced vaccination.

The CDC and the pharmaceutical industry are doing nothing to correct the people who make such comments because they use fear to sell their products. Fear breeds suspicion and once you have those two things in place it is easy to make the masses afraid of their own shadow! (CW)

Your right to be left unthreatened in your own home could be at risk. Here’s what you need to know.Action Alert!

In January of this year, on the last day President Obama was in office, the Centers for Disease Control and Prevention (CDC) published a final rule that expands its authority to apprehend, isolate, and quarantine individuals suspected of having any of nine diseases on the US quarantine list: cholera, plague, diphtheria, smallpox, yellow fever, infectious tuberculosis, viral hemorrhagic fevers (like Ebola), severe acute respiratory syndrome (SARS), and varieties of influenza that may cause pandemic.

This is the first time the quarantine rules have been updated since the 1940s. Under the old system, the CDC’s authority to quarantine was limited primarily to those entering the country or crossing state lines. And even then, in practice, the feds typically deferred to state and local health officials to contain the spread of infectious diseases.

Under the new rules, the CDC can detain people anywhere in the country without getting approval from local health officials. The definition of “ill persons” has also been broadened, which means that the agency can detain a broader group of people it thinks are exhibiting the symptoms of infectious disease—symptoms as common and as wide-ranging as headaches, cramps, and fevers. Airline and ship crews are required under the new rules to report overt signs and symptoms of sick travelers to the CDC.

Additionally, the CDC can quarantine you for seventy-two hours before the case is subject to a review—and that review is conducted by (you guessed it) the CDC.

Some health authorities fear that the CDC’s power grab will have the opposite effect. Fearing new draconian quarantine rules, as well as surveillance from a flight crew, sick people will likely take additional measures to hide an illness.

The final rule stipulates that when a person is quarantined, medical examinations and treatments can only be performed with prior informed consent. This was only won through a vocal backlash of concerned citizens. But if you have been forcibly removed from your home, how much freedom of medical care choice do you have left?

The rule specifically mentions measles and pertussis, and allows the CDC to monitor travelers displaying common symptoms of those illnesses. Note that measles and pertussis are non-quarantinable diseases—for now. But state health officials can quarantine individuals for certain communicable diseases, depending on state law. Massachusetts has perhaps the most harshly authoritarian law of this kind that we’ve seen. The state can remove you from your home pretty much anytime they want to do so.

While stopping the spread of deadly infectious diseases is laudable, it is unacceptable to pursue this goal at the expense of Americans’ most basic civil liberties, such as the right to remain in their homes unmolested by government.

Action Alert! Send a message to the CDC (with a copy to Congress) telling them that the final quarantine rule is unacceptable and must be amended to respect our most basic rights, and that such rule changes should only be made with congressional approval—and not by bureaucrats. Please send your message immediately.