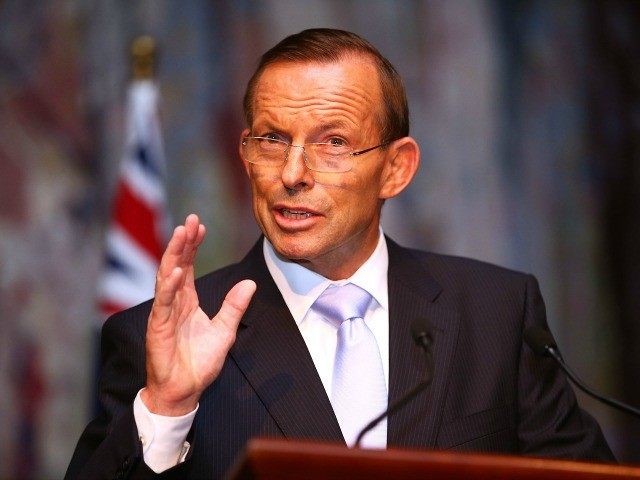 Twelve-months after his removal as leader of the Liberal/National conservative coalition, Mr. Abbott said all politicians had a duty to be “honest” with voters and not to deny what they can see for themselves.

In an address to the Alliance of European Conservatives and Reformists in Prague, Mr. Abbott said it was “more important than ever to be brave” and Europe needed to consider immigration changes including the possibility of turning back migrant boats.

“For some years, 500 million Europeans probably could absorb current inflows provided the newcomers were joining in, rather than breaking in,’’ Mr. Abbott said.

“Some of Turkey’s leaders have even urged Muslims to take back parts of Europe; and among the would-be migrants are soldiers of the caliphate bent on mayhem.

“Many of those taking to boats across the Mediterranean or clamouring at Europe’s gates look set to join an angry underclass. Too many are coming, not with gratitude but with grievance, and with the insistence that Europe should make way for them. Over time, this becomes an existential challenge.

“And if Europe won’t meet it – as Brexit shows, as the reimposition of border controls show – individual countries will insist on dealing with it in their own way.’’

Mr. Abbott went on to praise Australia as “an immigrant nation; we well appreciate that people from Africa and the Middle East have every reason to seek a better life – but they have no right to demand that Europe should provide it to them.

“Europe’s navies must do their humanitarian duty and rescue people who might otherwise drown; but taking them onto Italy and Greece just guarantees that more will make this dangerous journey.

“So long as people think that arriving in Europe means staying in Europe… they will keep coming. Sending them to more European countries won’t solve the problem; it will just spread it around. People in no immediate danger have to be turned back at Europe’s borders. People intercepted in the Mediterranean have to be returned to their starting point.

“This crisis can’t be managed; it has to be resolved.

“That’s what Australia did, under my government: we stopped illegal boats at sea and escorted them back to Indonesian waters. If the boats were scuttled, we had big orange life rafts on hand so that people could safely return from whence they’d come.

“I knew the risks to our personnel; I knew the damage this would do to relations with Indonesia; I knew the outcry it would spark from well-meaning activists but it simply had to be done.

“Effective border protection is not for the squeamish, but it is absolutely necessary to save lives and to preserve nations. The truly compassionate thing to do is: stop the boats and stop the deaths – and, for more than two years now, there have been no illegal arrivals by boat in Australia and the drownings have stopped.

“And having stopped the boats, we’ve been able to increase our genuine refuge intake because the Australian government has been in charge, not the people smugglers.

“Europe’s challenges are on a larger scale and the geography is different but with the right will and organisation there is no reason why there could not be similar success.’’

Mr. Abbott did finish on a positive note. He said it was necessary to remain optimistic and never lose faith in Western democracy and its hard-won heritage of civilisation.

“The struggle of democracies everywhere to rein in debt and deficit and to boost productivity could be the beginning of a long economic decline — or it could be what forces political leaders to be more honest with our electorates.

“As conservatives, we are proud of what has been achieved; but we want to build on the past, not to re-create it.”

Mr. Abbott labelled as “tosh” suggestions Britain would be worse off economically or isolated culturally after Brexit. He said the main reason he believed people voted to leave was not that Britons were opposed to immigration but feared loss of control over it.

He urged Europeans to pay attention to the people’s wish for border security.

4 thoughts on “Former Australia PM Tony Abbott Tells EU: Seal Your Borders And Be Honest Over Scale Of Migrant Invasion”