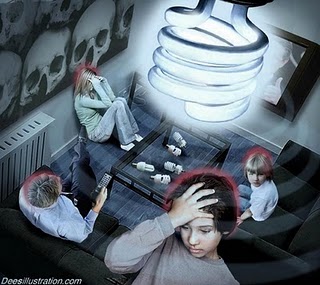 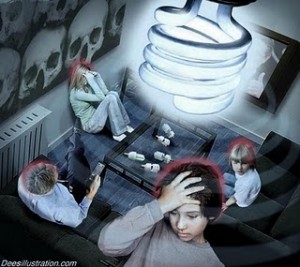 I just returned from the Health Freedom Expo in Long Beach, California where I interviewed an array of experts in fields pertaining to health. One of the more fascinating interviews was on the subject of “dirty electricity”. One of CMNs regular viewers, Joe, has been suggesting for years that we take this subject on and I think we’ve finally connected with the right people.

Donna Fisher has authored 3 books on the subject of dirty electricity and it’s unhealthy, even deadly, effects on human health. I interviewed her and Dave Stetzer, a gentleman who is known as the top Poor Power Quality Expert in the world. Both of these fascinating interviews will air on CMN over the next couple of months. Meanwhile, there’s something I don’t want to wait to share with you.

After my interview with Dave Stetzer, I began asking him about the Compact Flourescent Light (CFL) bulbs, which I cannot bear to be around.

First he began telling me a story about a Chinese Restaurant that had been a favorite in his community, always crowded. The restaurant closed for a short time to complete a remodel. They re-opened with an energy saving CFL over each table. Within a very short period of time the restaurant was out of business. The reason? These bulbs emit a type of frequency that make people feel unwell – including myself. You leave the restaurant not feeling well and attribute it to the food (to say nothing of that sickly yellow green tint to your dining companion’s skin!). After a couple of visits you don’t return. The food was the same, the lighting was different, the restaurant is gone.

Scott, in trying to do the energy conscious thing, put them in our home when they first appeared on the market. I didn’t know he had switched out the light bulbs. From the first flip of the switch I no longer wanted to be in the kitchen, where I do quite a bit of cooking. I asked Scott what was wrong with our lighting, they made me feel depressed and I wanted to get as far away from them as I could. This, I hear, is not an uncommon reaction to these bulbs.

This prompted me to ask Dave Stetzer why the government was pushing them on the public – mandating them. We may have hit the jackpot with his answer. He began by telling me that the electric industry is a top contributor of ‘soft funds’ to U.S. senators and congressional representatives, ahead of big pharma. He continued: