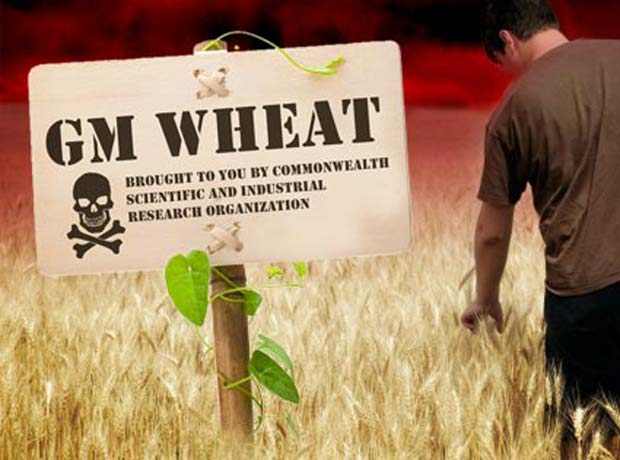 AUSTRALIAN SCIENTISTS are expressing grave concerns over a new type of genetically engineered wheat that may cause major health problems for people that consume it.

University of Canterbury Professor Jack Heinemann announced the results of his genetic research into the wheat, a type developed by Australia’s Commonwealth Scientific and Industrial Research Organisation (CSIRO), at a press conference last month.

“What we found is that the molecules created in this wheat, intended to silence wheat genes, can match human genes, and through ingestion, these molecules can enter human beings and potentially silence our genes,” Heinemann stated. “The findings are absolutely assured. There is no doubt that these matches exist.”

“If this silences the same gene in us that it silences in the wheat — well, children who are born with this enzyme not working tend to die by the age of about five,” Carman said.

IN A RECENT FRENCH LAB STUDY, rats that were fed genetically modified foods had a tendency to develop tumors and suffer severe organ damage. GMO’s have become a hot topic in the United States and in California people are demanding GMO food be labeled in the state. Many consumers feel humans will suffer the same fate as the lab rats and are hoping to put a stop to GMO food.

Alexis Baden-Mayer, political director for the Organic Consumers Association joins Russia Todaywith more on the startling consequences, and why Americans should be aware if they are buying GMO foods or not. | More

Digital Journal contacted Heniemann and Kinnear for more information on their research and future actions they may take regarding this issue.

“To date we have not heard from CSIRO, nor are we aware that CSIRO has released any safety studies into the GM wheat,” Kinnear said in an email response.

“We are in the final stages of drafting a formal letter to CSIRO which will be requesting further information and asking for them to undertake the studies that are recommended in our reports.”

According to the researchers, extended testing should be performed before the wheat is put on store shelves. “We firmly believe that long term chronic toxicological feeding studies are required in addition to the detailed requests made by Heinemann for the DNA sequences used,” Kinnear stated.

“The industry routinely does feeding studies anyway, so it should not be too much more difficult to do long term (lifetime) studies and include inhalation studies,” Heinemann added. “These should be tuned to the way people would be exposed to the product.”

The researchers also cautioned consumers against eating the wheat if it is approved prematurely. “I would advise citizens to request that these tests be done and the evidence meet with their standards of scientific rigour if in the end it is approved for use,” said Heinemann.

If the concerns surrounding CSIRO’s GM wheat are not resolved, the issue could end up in court, according to Kinnear: “If CSIRO was to consider moving towards human feeding trials without conducting these studies, we would be looking at what legal avenues are available to stop them.”