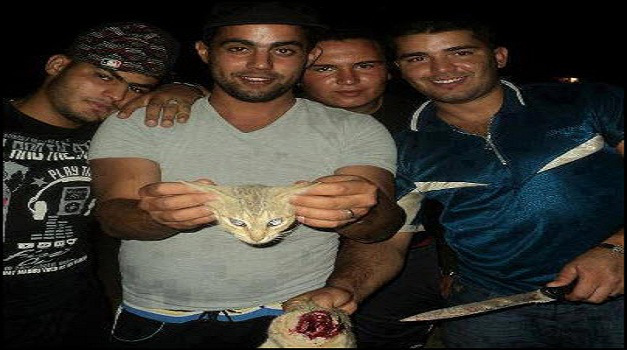 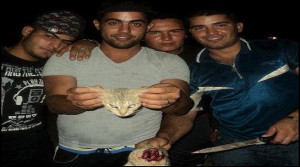 This scum get let into a beautiful European country & look what they do with their time.

Alerta Digital (Translated) – “Swedish police are investigating a case of animal abuse after a photo published on the net where four men appeared with the severed head of a cat. One held the animal’s head while another was carrying a knife and the cat’s body.

After leaving the photo on the net, new images have been revealed where you can see how the cat is skinned by a man with a large knife and standing proudly with the cat’s head.

Östergötland police were investigating the case, but it finally went to Nykoping. According to a police report, the man with the cat’s head has been identified as a citizen of Vagnhärad, Sweden. The only one identified is the prime suspect of animal cruelty because the picture was published.

Following the identification, the portal has been exposed to reveal the identity of the four men involved through their social profiles on Facebook.

According to the website, who holds the animal’s head by the name of Hamza Tchaki, of Tunisian origin. At his side, holding the knife appears Youssef Ben Ali, while the left is Kuorbam Uomama with a baseball cap. Finally, the man who is at the bottom of the photo is Firas Mani. They are all Tunisian govern.