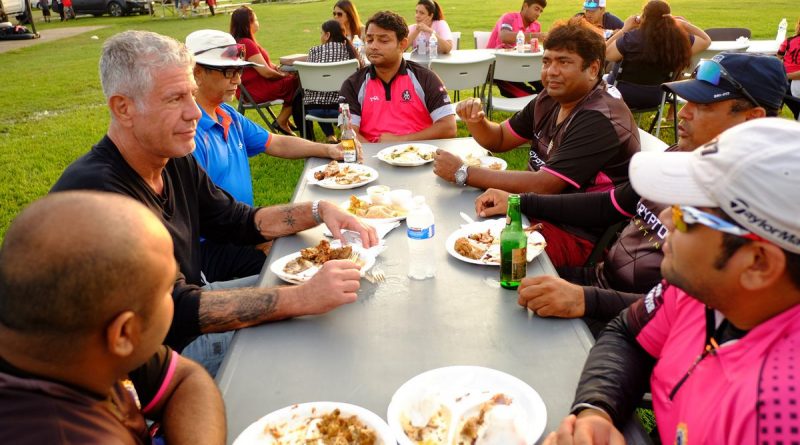 I have seen a lot of conspiracy theories swirling about Anthony Bourdain’s recent death.

Was he whacked for calling out Weinstein, Trump and Israel’s Black Cube agency? Was it his apparent support for Palestinians? Was it his comments about wanting to poison Trump if he ever cooked for him? Maybe he died from auto-erotic asphyxiation?

I don’t know or care. He was a genocidal jew (on his mother’s side) who celebrated the extermination of White people. Good riddance!

In this now infamous clip from CNN’s Parts Unknown, Bourdain is speaking to chef René Stessl from Germany. After talking a bit about food, the two started getting into the sexual assaults that had taken place in Cologne, and Bourdain asked Stessl if Middle Easterners and Africans could ever become part of Germany. Stessl said that it is possible, but only if “right-wing people will not develop.”

I think I want to talk about utopias. It’s a kind of utopia, just the fact that the whole world will mix up with each other. In I don’t know, 70, 80 years, there will be no White people anymore, and only cappuccino colored people. It’s good. It’s good.”

Pay close attention to how the focus was specifically on there not being any White people in this mixed utopia. Committing White genocide is their primary motivation, not some kind of abstract brotherhood of man where everyone gets along. As we have been saying for years now, “diversity” really means no White people allowed.

Absurdly, some so-called “nationalists” have taken to defending Bourdain. He was even labeled a “martyr” during a debate with myself on Twitter, which was sparked by Russ Winter’s recent comments on The New Nationalist:

In reality and practice, he was a Europhile, respected those national cultures and never diminished or trashed any of the various largely white nations he portrayed. Because he was trying to teach respect, I think Bourdain gave lip service to a confused political correctness, but at the local level was a closet nationalist.

In reality and practice, Anthony Bourdain was an anti-White jew who even banned White people from appearing on his Houston episode. From PaperCityMag:

Anthony Bourdain received plenty of love for the unconventional Houston episode of his popular CNN TV series Parts Unknown. The episode’s diversity was particularly praised. It turns out the bad boy chef turned travel savant achieved that with one simple edict. “No white people,” Bourdain told producers about his vision for highlighting Houston according to a recent New Yorker magazine profile.

Let me just reiterate what the “Europhile” and “closet Nationalist” Bourdain said about the world’s future and about his own show:

Bourdain is being held up as a shining beacon of enlightenment, while people like us at Renegade are denigrated as the ultimate evil for standing up against the destruction of our people. We live in a sick world where genocidal jews are not only featured on TV, where they are able to spew their venom to millions, they are celebrated as great heroes for doing so.

Just imagine if a White television presenter talked about wishing to see a “utopia” without blacks (or heaven forbid, without jews) and then proceeded to exclude them entirely from his show, simply because of their ethnicity. The uproar would be tremendous. Lynch mobs would hound the host wherever he went. He would be boycotted and fired. If he ended up dead, people would celebrate and spit on his grave.

We must make the perpetrators of White genocide pay for their crimes against us. Never forgive. Never forget. These people want to see our people extinct. We must do everything in our power to awaken our people, neutralize our enemies, and secure a lasting future for our folk.

Kyle Hunt is the publisher of the Renegade Tribune and the founder of Renegade Broadcasting, where he hosts The Solar Storm. He also organized the 2014 White Man March and created the film adaptation of Hellstorm. Your donations are appreciated!