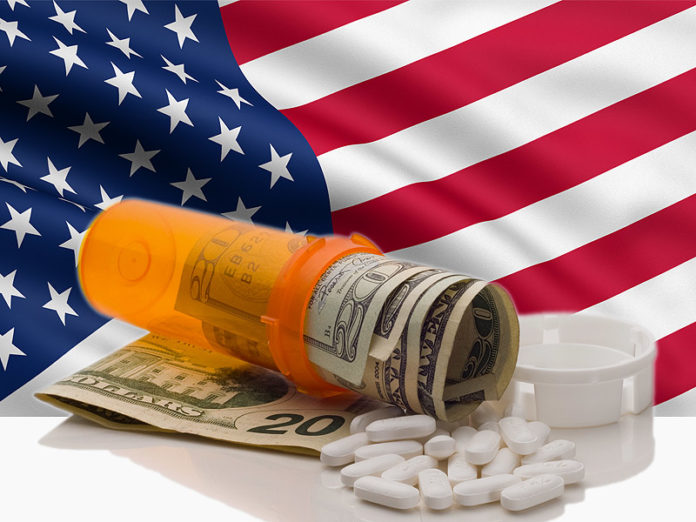 Big Pharma depends upon Big Media to present a positive image of the industry, while Big Media receives billions of dollars from Big Pharma for advertising. There is a reason why corporate media in the United States shares at least one board member with at least one pharmaceutical company…

Due to rising prescription drug prices and falling wages Americans are being forced to make a tough choice, which explains why about 1 in 10 American adults don’t take their medications as prescribed.

But how do pharmaceuticals companies manage to outrageously hike the prices of life-saving prescription drugs despite fierce competition? And, get away with price-gouging? Because it’s the law.  Because it is illegal for Medicare to negotiate with drug companies. Because the U.S. allows drug companies to set their own prices. Because Big Pharma, politicians, and corporate media conspire to keep drug prices high.

“One out of five Americans age 19 to 64 cannot afford their prescriptions. Hundreds of thousands of seniors cut their pills in half to stretch one month’s prescription into two. Meanwhile, the five largest drug companies made more than $50 billion in profits last year.

“The top 10 CEOs in the industry received a total of more than $327 million in compensation. They [Big Pharma] currently have 1,266 lobbyists on their payrolls in Washington, D.C., and 118 fighting for their priorities in Sacramento. They’ve made hundreds of millions in campaign contributions to politicians.”

According to the latest Media Matters for America study, there has been no coverage of prescription drug prices on the CBS Evening News or ABC World NewsTonight since December 6, 2016. While NBC Nightly News aired one story about EpiPen price hikes, PBS NewsHour discussed the drug prices issue just twice. From December 6, 2016, through March 10, 2017, MSNBC devoted just six segments to the topic of prescription drug prices, while CNN and Fox News ran just four segments each.

Ironically, while the corporate media barely mentioned prescription drug prices, their viewers were bombarded with commercials by pharmaceutical companies. According to iSpot TV data, drug companies paid $2.2 billion to air TV ads for their top brands in 2016; in January 2017 alone, they spent a whopping $173 million on direct-to-consumer ads (Big Pharma overall shelled out $5.6 billion on direct-to-consumer ads last year).

Why are the network newscasts ignoring the issue of skyrocketing prescription drug prices?

“Americans pay the highest prices in the world by far for prescription drugs, and nearly one in five American adults cannot afford to buy the medicines they are prescribed. Yet your networks sweep this story under the rug.

“At a time when 77 percent of Americans, according to a Kaiser Family Foundation survey, call prescription drug costs unreasonable, your networks’ lack of attention to this problem is remarkable. I hope very much this lack of coverage has not been influenced by the enormous amount of advertising done on your networks by the pharmaceutical industry.”

While Sanders has the guts to stand up to Big Pharma, most of his colleagues and corporate media don’t. The Ring of Fire Network explains why:

“The marriage between Big Pharma and the mainstream corporate media has been a textbook example of a symbiotic relationship. Big Pharma depends upon Big Media to present a positive image of the industry, while Big Media receives billions of dollars from Big Pharma for advertising.

“Over the past five years, Big Pharma’s advertising budget has gone up a whopping 62 percent. In 2016, pharmaceutical companies spent over $6 billion on multimedia advertising. With that kind of revenue at stake, what major media corporation is going to bite the hand that feeds it?

“Big Pharma hedges its bets by making sure it has representatives sitting on the boards of corporations like NBC, ABC, FOX, and even Facebook and Twitter to keep them in line.

“Now, the industry is recruiting economics professors at leading universities to convince health care consumers that such price increases are justified and necessary.”

This article was originally published by Anonhq.com