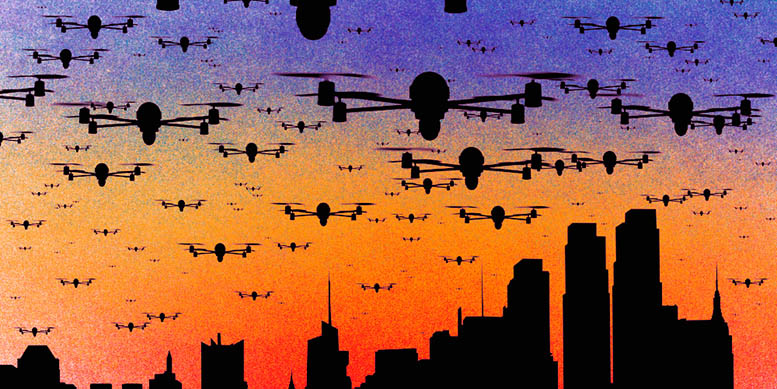 Yesterday, I covered an announcement by the U.S. Navy that they are planning to enhance the swarm capabilities of their drone patrol boats to include decision making without human input. In the video demonstration from that article, called Swarm 2 – Mission: Safe Harbor, various researchers and officials make it clear that swarms of autonomous vehicles are the future of seaborne security.

As we know, airborne drones have been employed longer and presumably are further along the developmental path. In fact, as the global drone arms race continues, there is now a burgeoning industry that has to not only create the drones of tomorrow, but to thwart the drones that are bound to be created by adversaries in response. This is a perfect scenario for the military-industrial complex … not so much for those of us who desire a world free of war and surveillance.

Yet another complexity that has been introduced is that of consumer drones. These have proliferated at an exponential pace, which has led to a range of proposed local legislation aiming to require owners to buy insurance, get license plates, and be subjected to GPS tracking in some cases.  As it stands at the federal level, the FAA has in fact imposed mandatory drone registration. The Navy has even gone so far as to enlist the public in their own See Something, Say Something campaign to urge citizens to report hobby drones spotted near military bases.

These concerns and more were addressed at the recent Countering Drones Conference, held in London, UK December 6-8. One of the emerging developments can be seen in the video below: autonomous security patrol drones. As you will see, these drones would have the ability to launch on their own, identify intruders (from facial recognition databases?), and coordinate a response.

The concept is quite similar to what has been proposed for private neighborhood security as well. The article “Smart Neighborhood Watch 2025: Biometric Burglar Detection, Directed Energy Weapons and Rooftop Drones” includes a video showing an advanced ADT system of the future.

All of this is to say that yet another sector of the human economy is set to be replaced by automation. Moreover, the erasure of human freedom is now a very profitable endeavor indeed.