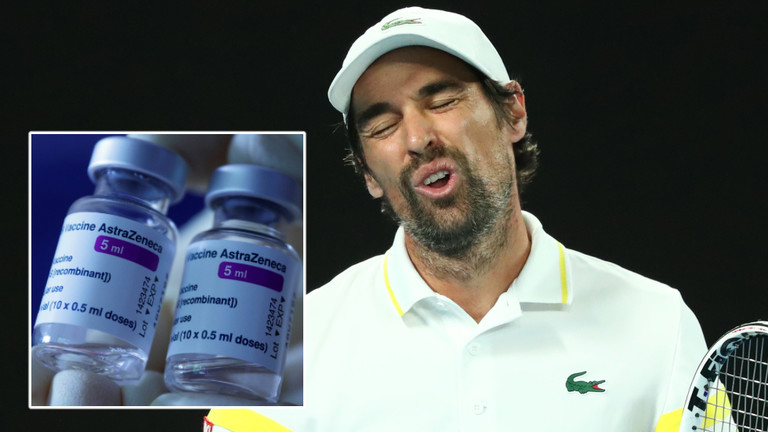 A tennis star has admitted he does not know when he will return to the sport and fears he may have to bring forward his retirement because of health problems he says he has suffered since taking the Pfizer Covid vaccine.

World number 73 Jeremy Chardy has become the latest tennis star to speak out against vaccines after experiencing what he describes as violent, near-paralyzing pains across his body since taking the jab, warning that there is “no hindsight” once people have received the treatment.

The 34-year-old says he his priority is to “take care of myself” after seing two doctors and taking tests in a bid to deduce why he has found physical exertion so difficult since being vaccinated.

“Suddenly I cannot train, I cannot play,” the 2017 Davis Cup winner told AFP, explaining that he received the jab between this summer’s Olympics, when he was beaten by gold medalist Alex Zverev in the quarterfinals, and the US Open, when he lost in straight sets in the first round to Matteo Berrettini at the end of August. 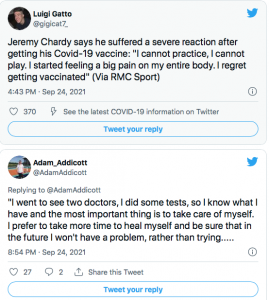 In my head, it’s difficult because I do not know how long it will last. For the moment, my season is stopped and I do not know when I will resume.

“It’s frustrating because I started the year really well, I was playing really well. And then I went to the Games, where I felt great too.

“And now my season is at a standstill and I do not know when I will resume. It is especially frustrating that I do not have ten years to play… suddenly, now I regret having had the vaccine, but I could not know [what the consequences would be].”

Covid vaccination requirements have been a contentious topic across sports, with some athletes and coaches enthusiastically extolling treatments while others have voiced their reservations and even been released by clubs as a result of their reluctance to be jabbed.

The issue has been notable among tennis players, including pleas by arguably the current headline act of the sport – Novak Djokovic – for vaccines not to be made compulsory.

While high-profile figures such as Rafael Nadal and Andy Murray have encouraged the public to become vaccinated, Stefano Tsitsipas became embroiled in controversy when he appeared to suggest that the spread of the virus could be a positive development, leading to the government in his homeland of Greece seemingly distancing itself from the contender despite the fact that he had acted as a figurehead for their vaccination campaign.

Tsitsipas has since said that he is willing to be vaccinated this year, having previously stated that he would only do so if it was made mandatory.

Former Wimbledon champion Pat Cash has claimed that Covid vaccines are experimental and been outspoken in voicing his opposition to players being forced to take them – a standpoint Chardy evidently agrees with.

I even prefer to take more time to take care of myself and be sure that, in the future, I will not have any problem, rather than trying to get back on the court as quickly as possible and finding myself still having health problems,”he said, describing a “series of struggles” he has faced.

“I’m 35 in February, so right now I might be a little bit negative – but it’s the first time that I have thought that next season might be my last… it’s difficult because I was having fun and I wanted to play longer.

“The problem is that we have no hindsight on the vaccine. There are people who have had similar [experiences], but the durations [of their issues] have been really different.”

According to World Health Organization (WHO) guidance updated in September, the group “thoroughly assessed the quality, safety, and efficacy of the vaccine” before recommending it for people over the age of 16 at the end of 2020.

The WHO says that the Global Advisory Committee on Vaccine Safety, a group of experts providing independent and authoritative guidance on safe vaccine use, receives and assesses reports of suspected safety issues that are “of potentially international impact.”

The vaccine is said to have a 95% efficacy against symptomatic contraction of the virus.