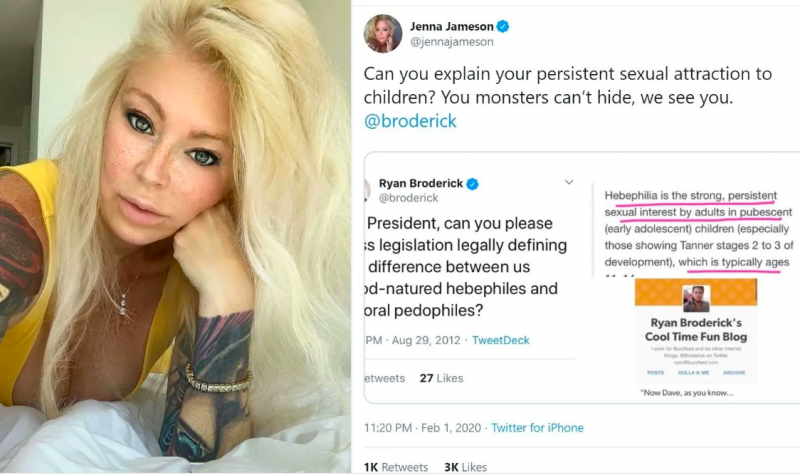 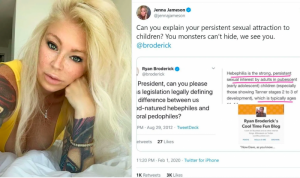 In a series of recent tweets, Jenna Jameson shared that she has “heard terrible things about “The Hunt.” Implying that societal elite people “hunt” children as young as 4, at “parties.”

She went on to state that “These topics circulate” among the elite. She also tweeted about Hollywood, expressing that,

“The reason why Hollywood has been so incredibly silent on child sex trafficking is not only do they partake, they are covering for the big league hitters. The ones that hide in the shadows under the cover of a crown.”

Just prior to those tweets, she brought up Jeffrey Epstein, tweeting the following:

“If you think Epstein is somehow unique, you’re sadly mistaken… there are MANY Epstein’s, that make him look like an amateur. Child hunting games, sacrifice, torture of children as young as 2. The elite.”

We’ve been writing about this topic quite some time, especially more so this year with all of the recent revelations that have made their way into the mainstream regarding elite child sex trafficking.

Epstein’s case goes beyond just the dealings involving Maxwell and himself, and the issue of trafficking very young children, and teenage children, it is much more widespread than Epstein.

Epstein is being made out to be a rich billionaire with connections that allowed him to entice young women into his home to be sexually abused, but we really need to talk about just how widespread this type of abuse is among people who are made out to be idols, like multiple Vatican officials, politicians and celebrities.

If you want to dive deeper, I recently published this article that does just that.

This kind of stuff is all over the place, and the theme involves high ranking people. As a paper published in European Psychiatry details:

“Research eventually led to the Franklin scandal that broke in 1989 when hundreds of children were apparently flown around the US to be abused by high ranking ‘Establishment’ members.

“Former state senator John W DeCamp, cited as one of the most effective legislators in Nebraska history, is today attorney for two of the abuse victims.