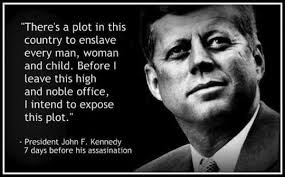 JFK’s Encounter with the Israeli Lobby

JFK got on the bad side of the Zionists long before he was elected to the presidency. In 1957 during his first Senate term he spoke of the need for Algeria to gain its independence. That speech did not sit well in certain quarters. From Michael Collins Piper’s book Final Judgment:

Israel, of course, saw the emergence of another independent Arab republic as a threat to its security and anyone favoring Algerian independence was, thus, advocating a policy deemed threatening to Israel’s survival.

Some of Kennedy’s critics said that the speech was a political move and that he chose the topic of Algerian independence as the subject of his first major foreign policy address because there was neither a “French” vote nor an “Algerian” vote to contend with in his home state of Massachusetts or in the nation as a whole.

While the latter observation is correct, of course, the fact is that there was one particularly powerful American voting bloc (and source of financial contributions) that did take note of Kennedy’s support for Algerian Arab independence: the powerful American lobby for Israel.

As we shall see, in the end, it may have been JFK’s initiative on the Algerian question that, in fact, played a major part in shaping the entirety of the conspiracy that ended his life in Dallas, Texas on November 22, 1963.

This gesture by the young senator also angered many French nationalists who wanted to retain French colonial control of Algeria. Many of these nationalists later banded together in the so-called Secret Army Organization—the Israel-backed OAS—and fought against French President Charles DeGaulle who ultimately granted Algerian independence.

2 thoughts on “JFK With Don Fox”