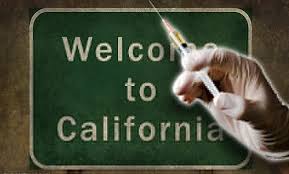 Jim Carrey is not happy with California Gov. Jerry Brown.

The actor, 53, believes there is a link between vaccines and autism and called Brown a “corporate fascist” after he signed into law one of the strictest immunization programs in the country Tuesday.

The bill would require kids at daycares and schools to be vaccinated unless there’s a serious medical reason why they shouldn’t be. Personal or religious exemptions would not be permitted, and if parents disagree, they can home-school their kids. Only two states, Mississippi and West Virginia, are as strict.

Carrey has been an activist on the hotly debated issue since his relationship with Jenny McCarthy, who believes her son’s autism was caused by vaccines.

The Dumb and Dumber To actor took to Twitter Tuesday to vent his frustrations over the bill and rally support from his 14.7 million followers: