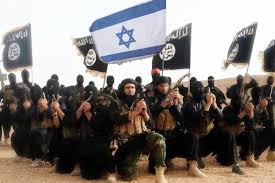 In his new book, The WikiLeaks Files, Julian Assange confirms what myself and others such as Webster Tarpley, Ziad Fadel, Tony Cartalucci, Mimi al-Laham, and Eric Draitser,  have been stating for some time – that not only was there a coordinated Western attempt to destabilize and ultimately destroy Syria and the secular government of Bashar al-Assad, but that such an attempt was devised much earlier than 2011, when the “Arab Spring” color revolution protests began in earnest.

In his book, Assange reveals that the Syrian destabilization plan goes back as far as 2006. He references a 2006 diplomatic cable from US Ambassador to Syria, William Roebuck where the official discussed plans to create a situation where the Syrian government would be enticed to “overreact” to false or manufactured threats posed by “radical jihadists” crossing back and forth between Iraq and Syria. The plan would have portrayed the Syrian government as weak in the eyes of the Syrian people, presumably encouraging protests and social unrest while, at the same time, causing the Assad government to crack down and jump the gun on its reaction to the perceived threat.

In an interview with Going Underground, Assange stated,

…That plan was to use a number of different factors to create paranoia within the Syrian government; to push it to overreact, to make it fear there’s a coup…so in theory it says ‘We have a problem with Islamic extremists crossing over the border with Iraq, and we’re taking actions against them to take this information and make the Syrian government look weak, the fact that it is dealing with Islamic extremists at all.’

In addition, he suggested that a major part of the Western plan was to

foster tensions between Shiites and Sunnis. In particular, to take rumors that are known to be false…or exaggerations and promote them – that Iran is trying to convert poor Sunnis, and to work with Saudi and Egypt to foster that perception in order to make it harder for Iran to have influence, and also harder for the government to have influence in the population.

Assange’s revelations are yet more confirmation of what informed observers have already known for quite some time. For instance, Seymour Hersh writing for the New Yorker in his article “The Redirection,”

To undermine Iran, which is predominantly Shiite, the Bush Administration has decided, in effect, to reconfigure its priorities in the Middle East. In Lebanon, the Administration has cooperated with Saudi Arabia’s government, which is Sunni, in clandestine operations that are intended to weaken Hezbollah, the Shiite organization that is backed by Iran. The U.S. has also taken part in clandestine operations aimed at Iran and its ally Syria. A by-product of these activities has been the bolstering of Sunni extremist groups that espouse a militant vision of Islam and are hostile to America and sympathetic to Al Qaeda.

Even earlier, an article written by Michael Hirsh and John Barry of Newsweek entitled “The Salvador Option,” in 2005 revealed a different plan. Hirsh and Barry wrote,

Following that model, one Pentagon proposal would send Special Forces teams to advise, support and possibly train Iraqi squads, most likely hand-picked Kurdish Peshmerga fighters and Shiite militiamen, to target Sunni insurgents and their sympathizers, even across the border into Syria, according to military insiders familiar with the discussions. It remains unclear, however, whether this would be a policy of assassination or so-called “snatch” operations, in which the targets are sent to secret facilities for interrogation. The current thinking is that while U.S. Special Forces would lead operations in, say, Syria, activities inside Iraq itself would be carried out by Iraqi paramilitaries, officials tell NEWSWEEK.

Obviously, the plan detailed by Hirsh and Barry is different from the one detailed by Seymour Hersh. It is also different from the one revealed in the Assange cable revelation. However, both the theme and the ultimate goal are identical – use radicalized sectarian fighters inside Syria for the purposes of destabilizing and destroying the secular government of Bashar al-Assad.

The CIA’s arming, funding, training, and directing of al-Qaeda, ISIS, and other so-called “moderate” terrorists is the only reason these organizations even exist in Iraq and Syria at all, much less the reason that these organizations have become so powerful so as to have the ability to launch full-scale war.

The way out, of course, is simple. Peace in Syria does not require reinvading Iraq and it most certainly does not involve invading Syria. Nor does it involve continuing to arm the Syrian death squads. It merely requires the United States, NATO, and the GCC to stop funding and directing ISIS as well as the other terrorist organizations under their purview and allow the Assad government, the Kurds, and other rational actors to finish the rest.