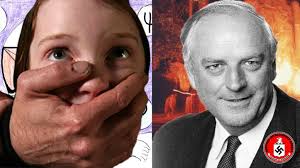 Kim Edward Beazley was a former Labor Party member of the Australian House of Representatives and Education Minister for 32 years. He is the father of the current Ambassador of Australia to the United States, Kim Christian Beazley – who has previously served as Minister of Defence and attended the Bohemian Grove. Both are known for being strong supporters of the CIA and both were involved with a well documented CIA-backed, psychological operation that took the form of a Christian-spiritualist movement. This movement was first known as the Oxford Group, and later evolved into what is known as Moral Re-Armament (MRA). It was founded by Nazi supporter, Frank Buchman, who planned on using MRA as the basis to form a world religion. Beazley Senior was heavily involved with MRA’s anti-communist operations in Australia and abroad. He was also the was the man who oversaw the trafficking of Fiona Barnett to VIP’s at Parliament House in Canberra – as part of a ‘dirty tricks’ operation to compromise and control politicians.

As Frances Stonor Saunders explained in her book “The Cultural Cold War: The CIA and the World of Arts and Letters“, MRA was hijacked and then directed by the CIA’s Psychological Strategy Board and managed under the code name ‘Packet’. Saunders says that MRA was used as part of a Cold War, Psychological Operation that aimed to appeal to, “intellectuals, scholars and opinion forming groups” for purposes of breaking down “world wide doctrinaire thought patterns which have provided an intellectual basis for Communism“. Beazley Senior intended to help the CIA achieve this by having his propaganda promoted in leading Australian newspapers, declaring “MRA wins Red Leaders“, “MRA the greatest threat to Communism“, “MRA a good antidote against Communism“, “MRA Changes a Red Killer, “(MRA is Communisms’) Greatest threat in the Battle for Men’s Minds“.

Similar to Scientology, MRA was used in the CIA’s ‘Occultism in High Places‘ program, which gave them, “secret channels right into the minds of leaders not only in Africa and Asia but also in Europe“. Beazley did this by travelling overseas to Europe and America to attend MRA events and conferences – forming good relationships with communists or left-leaning international leaders, then shooting MRA’s propaganda into their heads. He was even responsible for using MRA to form a strong relationship between Australia and Japan. Jim Wilcott, an accountant with the CIA in Japan in the early 1960s, wrote that MRA “was covertly supported and used by the CIA.”

Beazley is second from left – winning over left-leaning British and Irish Labour Party members at an MRA conference in Caux, Switzerland.

The previously mentioned Richard Casey, who had developed Australia’s first intelligence organisations with the CIA and MI-6, was involved with MRA. As Frank Cain explains in his book “The Australian Security Intelligence Organization: An Unofficial History“, MRA had a network within ASIO. Casey would attend the Pleasant Sunday Afternoon (PSA) gatherings to promote MRA, which Beazley Senior had also used to preach his anti-communism. Casey valued MRA – evident by his hiring of an early intelligence agent with no relevant qualifications to his work – besides his MRA membership. This man was Michael Rayner Thwaites, who attended the international MRA conferences just like Beazley Senior. Thwaites would later become the Head of Counter-Intelligence for ASIO, and let Beazley write the foreword of his book ‘Truth Will Out: ASIO and the Petrov’s‘, in 1980. Thwaites declared that “Moral Rearmament was a tremendous asset in his ASIO work“.

Former Labor Party leader and Communist sympathizer, H.V. Evatt accused Beazley of working for ASIO. Evatt was suspicious when he found out Beazley had gone behind his back to deliver information about probable Communist spies to the Prime Minister. Beazley admits he did do this, but denies any ASIO involvement.  Beazley Senior later became Vice-Chairman of the Joint Comitttee on Foreign Affairs (67-69), which dealt with matters of defence & intelligence, and he was previously on the Advisory Council of CSIROwhile MKULTRA-Australia suspects, Casey & Huxley had strong influence over the organisation. He had another connection to Leonard Huxley, being on the council of the Australian National University while Huxley was Vice-Chancellor. Beazley Senior was known for his intellect, and given that he had all the right political and intelligence connections, it’s highly likely he was a witting agent in his Australian-MRA brainwashing campaign for the CIA – and as you will see, he clearly wasn’t Christian….

Like the above mentioned Thwaites, Beazley Seniors children were raised in MRA, having been forced to take up anti-communism from a young age. Kim Christian Beazley was supportive of this, however, his sister Merrilyn wasn’t. She describes MRA as a cult which had an enormous influence on her family. It appears that involvement with occult rituals may also have had an influence on the family…..

Intelligence and the Occult – One and the Same?:

In 2014, Fiona Barnett went public with what she witnessed in 1985 at Bathurst City Hall. Former Nazi Officer & MKULTRA linked Doctor, Leonas Petrauskas took Fiona to this event which Beazley Senior jointly presided over with an Australian sporting icon, Richie Benaud. Petrauskas had earlier informed Fiona that Beazley ‘ran kids for ASIO’ as part of what appeared to be a ‘dirty tricks’ counter-intelligence operation. Fiona remembers that this ritual took place on the same date as the Bathurst 1000 racing event which interestingly turns out to be the date of Benauds 55th birthday. See the below video for a description of what happened;

Watch this other video if you are interested in the occult significance of the City Hall and the town of Bathurst.

In 2012, Kim Christian Beazley went with former Foreign Minister and CIA minion, Bob Carr to America’s home of ritual sacrifice – the Bohemian Grove – a place which Fiona remembers being trafficked to. VIP pedophile ring victim, Gordon Myers remembers both Bob Carr and Kim Beazley Senior.  Myers alleges that Beazley Senior and Bob Carr frequented one of the VIP venues he was prostituted to in Kings Cross – Sydney’s Red Light District. Unsurprisingly, we see intelligence connections to one of the venues Myer’s named – with one having been owned & operated by Robert Trimbole of the CIA-Nugan Hand Bank connected, N’Drangheta. Myers also alleges that he smashed Bob Carr’s Commonwealth Car leaving the VIP hot spot when he later returned with friends for a ‘pedo bashing’.