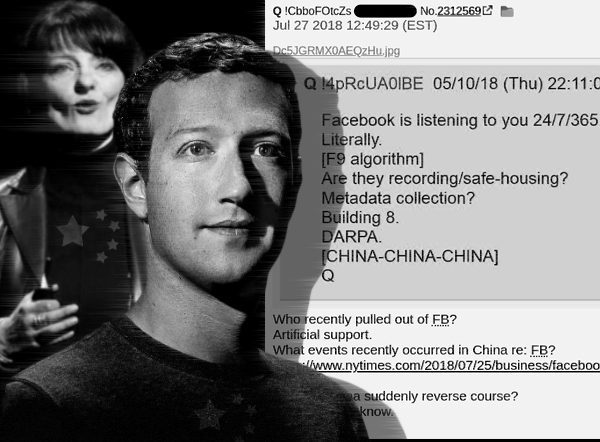 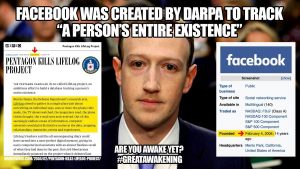 Who created Facebook? Many people have wondered about the true origins of the social media giant which has gone from a Harvard startup to the company with almost the most users in the world – around 2.38 billion as of the first quarter of 2019.

This is an astonishing figure which is inching its way to 1/3 (one third) of the entire global population.

Are we supposed to believe the “geek genius” cover story that is used so often to describe the origins of Big Tech / Silicon Valley companies – or is there something more to the story?

A few weeks ago on June 13th 2019, American Intelligence Media published a letter which was hand-delivered to a member of the Anonymous Patriot’s Conclave.

They were able to quickly verify a lot of the information in the letter, which they are calling the Zuckerberg Dossier. Although they can’t say that everything in the letter is true, they can “state with absolute confidence that the source is real.”

The letter makes many explosive claims as quoted below. I encourage you to read it for yourself.

The main themes are that:

– Mark Zuckerberg did not create Facebook but was chosen as a front man to make the military surveillance social media network go public;

– Zuckerberg was involved in CIA mind control programs as a child;

– Zuckerberg has many MIC (Military Intelligence Complex) handlers behind him who are controlling him and telling him exactly what to do;

– Zuckerberg stole code by hacking into the email account of the son of Michael McKibben, owner of Leader Technologies and the real inventor of scalable social media. Michael had emailed his son Max the white papers written to describe the new invention;

– Zuckerberg is either unable or barely able to write code, so the idea that he wrote innovative and unique code for Facebook is a giant, absurd lie.

Here are some quotes from the letter:

“Mark was chosen as child for a CIA training program because his relatives were some of the people creating the program. I am not making excuses for Mark, but his choices have not been his own.

“Yes, he has become an evil sociopath who once believed in his heart-of-heart that if he decided he wanted to be president, all he had to do is say he wanted the job and “Facebook” would deliver the election to him. This is the level of brain-washing Mark is at – he is not in contact with reality.”

“He became this way through the brain-washing he received in his High School years by a DARPA program called TIA that needed a “boy-genius” to be the front man.

“This scam would make Mark into a global model of the young, cool, irreverent computer geniuses that “rule the world” and lead everyone to a cyber-god of artificial intelligence. Mark was just an unwitting puppet …”

“Mark Greenberg (Zuckerberg) did not write one single line of programming source code for Facebook. Those are lies and propaganda generated by his government, military handlers.

“Everyone knows that the Winkelvoss twins (Aaron and Cameron) won a $65 million dollar lawsuit settlement against Mark because they knew that their little HarvardConnection (HC) piece was just adjunct code attached to the original stolen source code – which was given to Mark by Professor James Chandler and IBM.”

“My old buddy, Sean Parker, an early member of Facebook has “confessed all” to the media and specifically told the truth that Facebook was meant as a cyber-drug to create and control addicts – digital addicts.

“As Sean said, we knew from the beginning it was harming every user and that is why we never let our friends or our children use these systems – it harms them tremendously and was the original intent of the media. Mark and I were told by representatives of DARPA that that was the intent of Facebook from its inception.”

Sean Parker is a former Facebook executive who publicly admitted that when Facebook was designed, exploiting loopholes in human psychology was a goal.

Specifically, he mentions they built in giving people a dopamine hit every now and again to get them addicted, as well as playing off the people’s insecurity and need for social validation. He said:

““I don’t know if I really understood the consequences of what I was saying, because [of] the unintended consequences of a network when it grows to a billion or 2 billion people and … it literally changes your relationship with society, with each other … It probably interferes with productivity in weird ways. God only knows what it’s doing to our children’s brains.”

“The thought process that went into building these applications, Facebook being the first of them, … was all about: ‘How do we consume as much of your time and conscious attention as possible?’”

“It’s a social-validation feedback loop … exactly the kind of thing that a hacker like myself would come up with, because you’re exploiting a vulnerability in human psychology.”

“The inventors, creators — it’s me, it’s Mark [Zuckerberg], it’s Kevin Systrom on Instagram, it’s all of these people — understood this consciously. And we did it anyway.” — Sean Parker

As I covered in a previous article Hollywood, MSM & Silicon Valley: All Strings Pulled By Same Master, Facebook just coincidentally happened to have a creation date (February 4th, 2004) identical to when the Pentagon discontinued its Lifelog project.

Facebook is the ultimate tool for self-surveillance whereby a person will willingly give up their data and privacy without realizing what they are doing.

Final Thoughts: Who Created Facebook? Same Answer as Who Created Google, YouTube and the Rest of Silicon Valley

It remains to be seen whether the information in this letter or Zuckerberg Dossier will be verified. In answering the riddle of who created Facebook, we certainly need to recognize that, whether it’s Google/ Alphabet/ YouTube or Facebook, these Big Tech behemoths spun off from military projects and military seed funding right from the start.

Like Amazon with its giant $600 million CIA contract, Big Tech is joined at the hip with the MIC and does its bidding. Big Tech is now a critical and indispensable cog in the US national security apparatus.

It’s unprecedented and privacy-destroying surveillance – but you get free email accounts and emoticon-posting capabilities, so as Mark himself would say, it’s all cool, right?