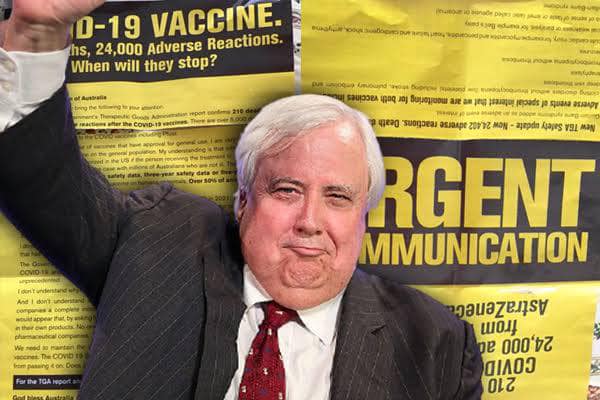 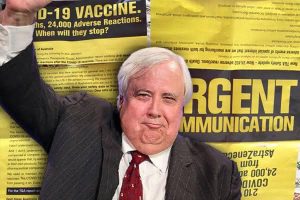 Thank you for your letter. As you will appreciate, all of our advertisements quote TGA reported facts. The first fact being that there has only been one COVID death in Australia this year.

The second fact being that your organisation, the TGA, reported that there have been over 300 deaths in Australia following the administration of the COVID vaccine. I’m interested to see the autopsy data which confirms that these deaths haven’t been caused by the vaccine.

I believe it is prima facie a reasonable assumption that if people are vaccinated and then they die prima facie the vaccine may have been the cause of their deaths. It is responsible for you in your public role to ensure that those matters are properly investigated and autopsies carried out to see if this prima facie conclusion can be disregarded.

It is a simple fact that the TGA – according to TGA reporting – has received over 24,000 adverse reports. Over 24,000 adverse reports would indicate that any public servant responsible for regulating such a medicine should exercise what power he or she has in the public interest and cease the administration and roll out of such a medicine. Otherwise it could be inferred that he or she is committing a serious malfeasance in public office and will bear a personal responsibility for the outcomes.

I would refer you to the CDC website in the United States which confirms that following effects of their vaccine program.

Why doesn’t the TGA publish Australian equivalent figures in these categories?

I note your comments in respect of the transparency, however it is disappointing that the TGA reports have now stopped reporting the number of people that have died following their COVID19 vaccination. Such a number of deaths caused over such a small portion of the Australians who have had the vaccines over such a compressed period of time should be a matter of concern. Normally a medicine that was responsible for even one death would be suspended.

I understand there have been over 10,000 deaths reported in Europe in respect of the vaccine. The combination of the forgoing matters means it’s beyond belief that the TGA does not take immediate action.

The facts of the matter are clear on the CDC website in the United States that over 50% of animals died in the animal trials of these vaccines, which would normally indicate that such vaccines are not suitable for human consumption.

I do not understand why the Australian Government has bought over 180,000,000 doses of the vaccines when there are less than 25,000,000 Australians, Prime facie it looks a serious case of enrichment for Pharma companies at the publics expense.

In respect to the 3.7 million deaths alleged to be caused by COVID in the world; you need to take stock of the number of deaths that occur in the world each year.

I am concerned about Australia and Australians and there has only been one Covid death in Australia this year. Moreover, serious concerns need to be expressed about Doctor Fauci in the US and the revelations that have come to light in recent times. I know from previous dealing with the TGA that it in many instances the TGA relies on his group to advise it.

It is true that I am a public figure in Australia and I have a duty and responsibility to represent to the community the facts as I see them without fear or favour. I do not find the arguments that you have presented in your email convincing. 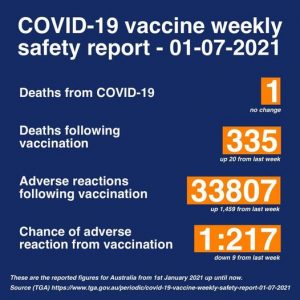 The facts are that we have no safety data for 1, 3 5, or 7 years for these vaccines. Nor do we have data in pregnant women or children, which Doctor Brendan Murphy and yourself acknowledged before the senate committee in April this year.

The TGA has no idea of the long-term outcomes of giving this vaccine to the Australian population. It is also a great concern that the Government has given the pharmaceutical companies an indemnity for any claims related to the injuries and deaths their vaccines may cause.

It would seem that those same pharmaceutical companies do not have faith and confidence in their products to market them as part of their business without such Government indemnity. What I have personally found disappointing is the fact that you, as head of the TGA, have a responsibility to properly regulate medicines and vaccines in this country.

I find it extraordinary to see you on television in paid commercials promoting a commercial product that is both the TGA’s and your responsibility to regulate. You have a serious conflict of interest.

The Hight Court of Australia has reconfirmed the implied term in our constitution of political free speech. I am a former member of the house of representatives and a chairman of a registered political party under the electoral act. I will continue to exercise my constitutional rights in this matter and if necessary, I am happy to meet any challenge in court in that regard.

I would advise you to get proper legal advice to ensure that you are protected against any claims that may be made personally against you in the future. You need to advise the government of what the Attorney General’s department knows already – that the Biosecurity Act is unconstitutional and could not survive a challenge in the High Court of Australia.

History has shown that governments have often been wrong. That propaganda and coverups have often taken place. That millions have died, because people in authority lack the courage and the proprietary to follow through with the principles and ethics of their calling.

There is no pandemic in Australia – only one person has died of COVID this year. The TGA and the government has started spreading misleading information. Designed to create fear in the population.

The only information that was published by me is that there has been one COVID death this year, that the TGA have reported that over 300 people have died after receiving the vaccination and that there were over 24,000 adverse reports received by the TGA. All of that comes from TGA releases.

I do find your statements about me as defamatory and am considering them before taking legal advice. I request you refrain from defaming me further. It seemed all of those facts and statements in our advertisements are absolutely true and confirmed by the TGA.

Australians have the right to be fully informed. Informed consent is a fundamental pre-requisite for any medical treatment. Australia has signed international conventions guaranteeing such consent.

There are serious questions to be answered over the financial and other interests of the TGA’s so-called expert committees. I am sure in the future that those committees will be shown not to be as independent as they should be and not to contain experts from all States and all relevant universities.