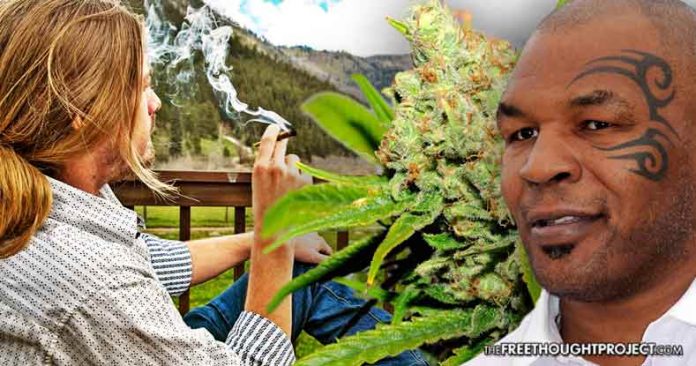 California City, CA – With the legalization of recreational marijuana in California on January 1st, former heavyweight boxing champion ‘Iron’ Mike Tyson is breaking ground on a 40 acre mega resort dedicated not only to cultivating high-quality strains of THC and CBD, but also utilizing state of the art technology to forward research into the numerous health benefits of cannabis.

The Blast notes that “Tyson Ranch” will dedicate 20 acres of the facility as growing facilities that “will allow master growers to have maximum control of their environment.” The mega-facility will also have a “Tyson Cultivation School” to teach growers the latest methods to perfect their own strains of cannabis
.
According to the exclusive report by The Blast:

Along with growing high-grade cannabis, Tyson Ranch will feature:

Tyson is reportedly a long-time believer in the medicinal properties of marijuana, according to The Blast, and aims to use the ranch as a place to forward research into the healing properties of cannabis.

CBD, a cannabis compound with no psychoactive properties, has been proven to work as an effective anti inflammatory, anticonvulsant, antioxidant and antipsychotic agent – and has been successfully used to treat PTSD.

Tyson recently trademarked the name “Iron Mike Genetics” for use at the cannabis resort.

Tyson Holistic, the company that owns the cannabis resort, employs mainly veterans and says that taking care of those who have served in the military is a top priority.

The Tyson Ranch will be located near Edwards Air Force Base and hopes to create many jobs in the community. The town expects a major boom in cannabis production and development as the “Green Rush” now hits California. California City mayor Jennifer Wood reportedly described the business venture as a “rebirth” for the entire city, according to The Blast.

“Undeveloped lands are primed to be cultivated” and Tyson Ranch will be an oasis in the desert, Hickman said.

Tyson has never been heavily associated with cannabis up until now, although, in a 2010 AP interview, he noted that that one of his biggest regrets was not taking the opportunity to smoke weed with Tupac.

“He always wanted me to smoke weed with him, and I never did it, and I wish I did,” Tyson said during the phone interview.

Tyson admitted that he declined the invitation because he was a ‘closet smoker’ and didn’t want word getting out that he used the drug.

“That’s my biggest regret,” he said.

According to The Bleacher Report:

The former heavyweight champion was fined in 2000 for testing positive for marijuana, and he said in his memoir that he got high before major fights. He also said he used marijuana when he was sentenced for cocaine possession in 2007.

Although smoking with Tupac will sadly never come to pass, something tells us that Tyson’s project will be a big hit – lots of pun intended – and he’ll likely have an opportunity to blaze with a who’s who of celebrity stoners.

We will keep you updated when an official grand opening for Tyson Ranch is set.