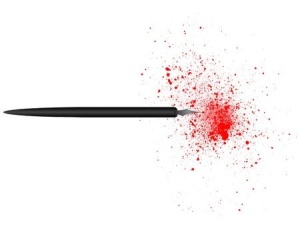 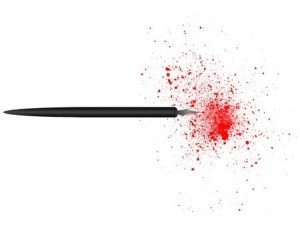 You guessed it! We are under attack yet again by the poisonous pens of the Murdoch minions., The latest instance reminded me of a blog I wrote a while back called “Anti Vaxxers the new dirty word”. Even though I wrote it over three years ago, it is just as relevant now as it was then. In this blog, I spoke about the natural progression of persecution against anyone who questioned vaccines.

“The path to repression begins with many small steps. It starts with the gradual wearing away of someone else’s rights through restriction of employment, public education, and government entitlements. Then comes ostracism whilst creating fear, hostility and resentment towards the group in question from the rest of society. Not too soon after that, segregation comes in to the mix.”

It was as if I was looking into some kind of warped crystal ball, when Victoria and Queensland welcomed the roll out of segregation against preschool children in 2016. Instead of the shock and horror that any sane person would feel at the imposition of such draconian legislation on children, this move was greeted with pats on the back and congratulations all around. How could we as a society have fallen so far that we would welcome the segregation of innocent children?

“Countless times in history we have seen that ugliness in human nature breeds more ugliness. Intolerance, discrimination, persecution, repression are all formed through fear and hatred. Have we learned nothing from the past, or are we just so insecure that we always have to look for someone to oppress in order to make ourselves feel powerful and dominant? If this type of hostility continues towards people who just want the right to make choices for their own families, what do we have to look forward to in the future?” 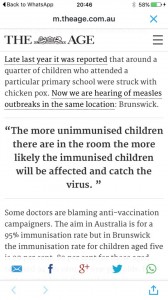 You don’t need a crystal ball to see what certain reporters want to see the future hold, all we have to do is look at the articles in the spiteful and malicious Murdoch rags the Courier Mail and The Daily Telegraph to see what they want to happen…

“Parents who choose not to vaccinate their children are akin to child abusers.
But on an even broader scale, because not only are they guilty of neglecting the safety and wellbeing of their own kids, but they [are] also exposing other children to a raft of preventable diseases.
And perhaps now is the time for serious discussions to occur about whether our legislatures make child vaccinations compulsory. Much like pool fencing or seatbelts. Or sending your child to school.”

Not satisfied by the new laws segregating our children and cutting welfare payments from low income families, they are calling for even more persecution to be meted out to families who raise healthy children without a dependence on pharmaceutical drugs.

So how exactly will they enforce this compulsory vaccination of our children, especially when parents who have researched the risks and failures of vaccinations continue to refuse to allow the nanny state to inject their children against their will? Just how many rights do they need to try and take away before their satisfaction for persecution is sated? Will they try and take away our children? Will they throw us in prison like they did in England in the 1800’s? Or will we be the next ones sent offshore to some remote place for the ‘greater good’?

What will it take for them to realise that in their ignorance and arrogance, they have become zealots on a fear-based vendetta against innocent children and their families, and how long will society let them get away with it?
The media for too long has been given free rein to whip their readers into such a frenzy of fear, they have all but forgotten what is right and wrong.

Surprisingly they have forgotten that segregation is wrong; disadvantaging children is wrong; vilifying and attacking others is wrong. Yet these very behaviours have been actively incited and demanded nonstop for the last 3 or more years by the media. So when will they be held accountable for their irresponsible actions? “Addressing hate speech against minorities in the media is important because we have seen in the past, and we continue to see today, how negative stereotyping and incitement to hatred can lead to further discrimination and violence targeting minorities. Social tolerance for discrimination, enmity towards segments of the population and hate crimes are neither spontaneous nor natural. They are a consequence and a manifestation of a state of mind in part of the society, of a particular dislike towards a population that would not exist if it were not cultivated by people of influence, media outlets, and other opinion-makers.”

The media in all their “wisdom” have chosen to cultivate and promote the negative stereotypes and hate speech against us and our children, they have continued to use us as the convenient scapegoats for the failings of the vaccines that they have put their blind faith in.

If they had done the tiniest bit of research, they would have known that their poisonous articles were unjustified and irresponsible and that they have failed yet again, in their duty to ensure they were reporting this issue fairly instead of blatantly parroting pharmaceutical propaganda. They might have even come across some very relevant facts like: • Measles is largely a disease of the vaccinated, just like Whooping Cough.

• that transmission of measles can occur within a school population with a documented immunisation level of 100%.
http://www.cdc.gov/mmwr/preview/mmwrhtml/00000359.htm

• Children of mothers vaccinated against measles and, possibly, rubella have lower concentrations of maternal antibodies and lose protection by maternal antibodies at an earlier age than children of mothers in communities that oppose vaccination. This increases the risk of disease transmission in highly vaccinated populations.
http://jid.oxfordjournals.org/content/early/2013/04/29/infdis.jit143.long

• CDC figures show how vaccination has changed the face of measles. In 1976, just 3% of all cases occurred in children under age 1. Typically, their mothers were born in the 1950s, well before the measles vaccine became routinely available a decade later.
In the 1980s, as teen-agers who were vaccinated as children began to have babies, those numbers started to change. In 1985, almost 8% of measles cases were in infants younger than 1. By 1991, it had climbed to 19%. And so far this year, 28% of all measles cases have occurred in babies under a year old.”
“Dr. Mark Papania and others looked at families where infants were exposed to people with measles. They found that the babies of mothers born after 1968, when vaccination became common, were 3 1/2 times more likely to get measles than were infants of older mothers.”
http://articles.latimes.com/1992-12-27/news/mn-5079_1_measles-vaccine/2

• Studies of measles outbreaks in Quebec, Canada, and China show that outbreaks of measles still happen, even when vaccination compliance is in the highest bracket (95-97% or even 99%). This is because even in high vaccine responders, vaccine-induced antibodies wane over time. Vaccine immunity does not equal life-long immunity acquired after natural exposure.
http://thinkingmomsrevolution.com/an-open-letter-to-legislators-currently-considering-vaccine-legislation-from-tetyana-obukhanych-phd-in-immunology/

• That well managed childhood infectious disease is linked to health benefits other than lifetime immunity for children
http://www.vaccinationcouncil.org/2013/01/29/measles-vaccines-part-ii-benefits-of-contracting-measles-by-dr-viera-scheibner-phd/ Believe it or not, there is a definite silver lining to all of these attacks on our community and that is this…

Just look at what our vast and diverse community has accomplished in the past year or so,

Imagine what we will achieve this year…

One thought on “Modern day zealots with a pen”