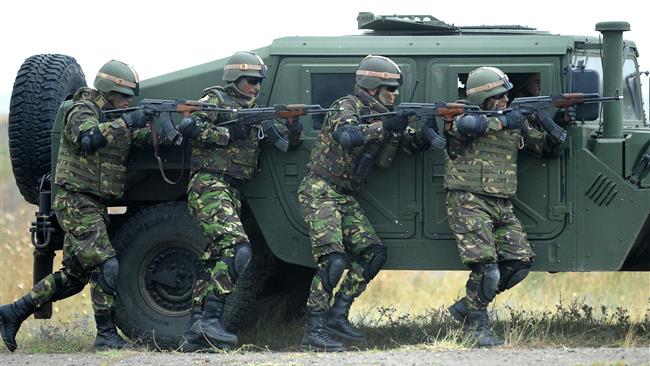 The North Atlantic Treaty Organization (NATO) has launched massive military drills across Europe, in what is seen as a move to deter alleged threats from Russia in the region.

According to reports on Tuesday, Germany, Italy, Bulgaria and Romania are currently hosting over 5,000 soldiers from 11 NATO member states participating in the massive airborne drills called “Swift Response 15”.

The maneuver “is the largest Allied airborne training event on the continent since the end of the Cold War,” read a statement issued by the US military base in the southern German town of Grafenwohr.

The drills, which started on Saturday and will continue for four weeks, are aimed at boosting the military capabilities of the organization’s “high-readiness forces” as well as showing “the alliance’s capacity to rapidly deploy and operate in support of maintaining a strong and secure Europe,” the statement added.

NATO is also scheduled to hold another large maneuver in September across the continent. Reports say that 36,000 soldiers from over 30 NATO and partner member states will attend the Exercise Trident Juncture in southern and central Europe next month.

“We are encountering challenges that we did not anticipate, but the lessons we learn will be valuable for NATO in the future,” said Commander of the Support Group Philip Morrison in possible reference to the rising tension between NATO and Moscow over the Ukrainian crisis.

Russia and 12 international organizations have been invited by the alliance to observe the September drills.

NATO-Moscow relations have been extremely tense in recent months. NATO and Kiev accuse the Kremlin of supporting pro-Russia forces in eastern Ukraine. Russia categorically denies the allegations, saying NATO is responsible for the flare-up in Ukraine.