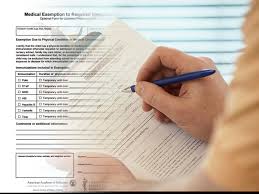 A recently published report called Annual Immunisation Coverage Report 2016authored by the National Centre for Immunisation Research and Surveillance (NCIRS), reveals that medical exemption data will be analysed to look for geographical hotspots.

Exploration of children with at least one medical exemption for a vaccine by geographical area, looking for any ‘hotspots’, will be undertaken as part of a separate report. (page 29)

Although the reason for identifying these hotspots is not provided, it is likely that it is for the purpose of identifying “rogue doctors” who are members of that alleged underground anti-vax cell we keep hearing about. And they call us conspiracy theorists!

A graph on page 27, and reproduced below, shows the number of new exemptions granted between 2011 and 2016 inclusive. Also notable is the spike in new medical exemptions in No Jab No Play states, New South Wales, Victoria and Queensland, relative to the other five states and territories.

New South Wales MP, Ron Hoenig, the member for Heffron, stated in the state parliament during 2017 that around 4 per cent of the population has a valid medical reason to refuse vaccination due to allergy or other contraindication, but did not provide the source for that figure.

Although it is suggested on page 29 of the report that stricter eligibility criteria for medical exemptions were introduced in 2016, this is not reflected in the wording of the legislation which did not change with the passage of No Jab No Pay, except for the classes of practitioners authorised to certify medical exemptions.  A comparison between the wording of the legislation pre and post No Jab No Pay is provided below.

It would have been more correct to say that the Department of Human Services introduced a revised medical exemption form which goes beyond the wording of the legislation, and infers, incorrectly that a doctor is restricted to certifying medical exemptions for only those contraindications listed on the form.  This is at odds with a 2017 decision by the Administrative Appeals Tribunal to the effect that whilst a doctor is required to consider the guidance in the Australian Immunisation Handbook, is not bound to follow it.

There should be no suggestion that the parliament, when considering enacting amendments to the legislation in 2015, via the No Jab No Pay Bill, intended to encroach upon a doctor’s clinical autonomy by prescribing that a doctor may only certify a medical contraindication for certain reasons.  Just as the wording of the legislation does not express such an intention, nor does the Explanatory Memorandum for the No Jab No Pay Bill suggest one.  The Explanatory Memorandumnotes that the assessment of medical contraindication can be complex, confirming the importance of a doctor’s clinical judgement when determining if vaccination for a particular child is medically contraindicated.

On 23 November 2015, the Leader of the Australian Greens, Senator Richard Di Natale moved, and the Senate passed, the following amendment to the motion that the ‘No Jab No Pay’ bill be read a second time:

[…] the Senate: (a) recognises that it is of critical importance that general practitioners remain able to use their clinical judgement in assessing children who are eligible for medical exemption; and […] (page 3401)

For information about how to obtain an exemption see our medical exemptions page.

Please share widely our Vaccine Laws page which contains links to information pages about vaccine laws across Australia including information about the compulsory phases of school.