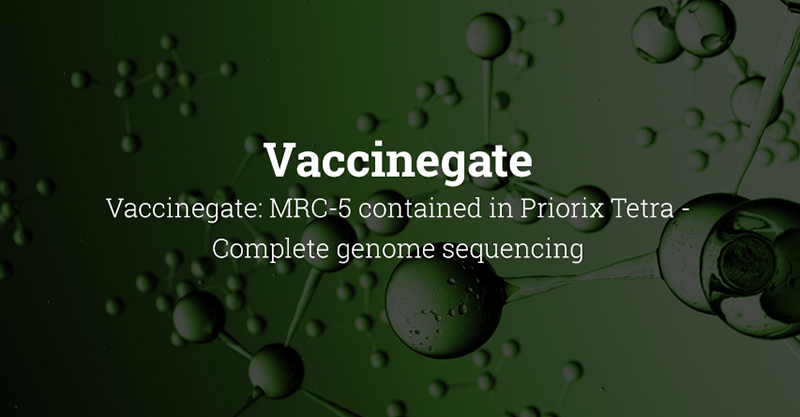 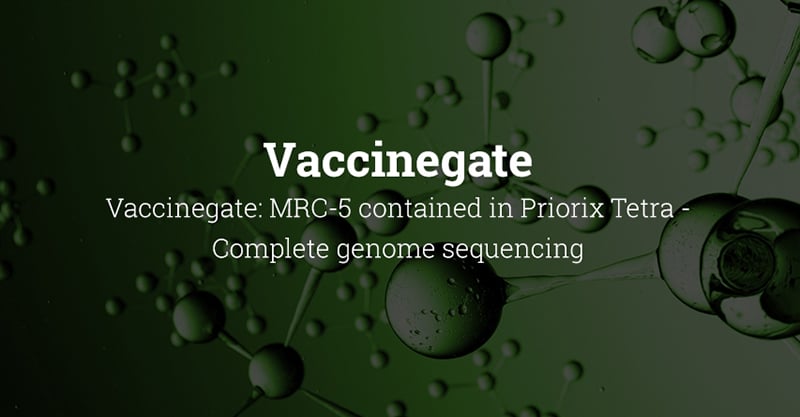 The Italian vaccine research and advocacy organization Corvelva recently released new data regarding the use of aborted fetal cell lines in vaccines. The research reports the results produced from the MRC 5 cell line analysis, particularly the one contained in GlaxoSmithKline’s tetravalent measles-mumps-rubella-chickenpox (MMRV) vaccine.

The Corvelva team summarized their findings as follows:

1- The fetal cell line was found to belong to a male fetus.

2- The cell line presents itself in such a way that it is likely to be very old, thus consistent with the declared line of the 1960s.

3- The fetal human DNA represented in this vaccine is a complete individual genome, that is, the genomic DNA of all the chromosomes of an individual is present in the vaccine.

4- The human genomic DNA contained in this vaccine is clearly, undoubtedly abnormal, presenting important inconsistencies with a typical human genome, that is, with that of a healthy individual.

5- 560 genes known to be associated with forms of cancer were tested and all underwent major modifications.

6- There are variations whose consequences are not even known, not yet appearing in the literature, but which still affect genes involved in the induction of human cancer.

7- What is also clearly abnormal is the genome excess showing changes in the number of copies and structural variants.

…the DNA contained in these vaccines is potentially TUMORIGENIC…

Corvelva notes that, according to the guidelines (which are found in the report), the presence of fetal DNA from cell lines MRC-5 and WI-38, as diploids, does not provide for upper limits: there is no limit to the amount they can find inside a vaccine. The motivation lies in the fact that these lines are not considered tumors because they have a “finite” (not immortalized) replicative cycle.

But the reference literature is obsolete. The first genetic anomalies were found on these lines, considered negligible for the safety of vaccines 40 years ago and, as reported in the WHO guidelines, since then no updates have been made with new sequencing technologies, particularly in Next Generation Sequencing (NGS); the consequence is that inside the vaccines that have been administered for decades is the presence of a progressively more genetically modified DNA and uncontrolled quantities has been allowed. The Next NGS is the methodology used by Corvelva for metagenomic analysis and the laboratory we used is located in the United States. Our analyses are constantly confirmed by several laboratories, the continuous verification of the initially obtained data is leading to consolidate not only the data itself, but the methods themselves.

What are we saying? We are saying that the DNA contained in these vaccines is potentially TUMORIGENIC and that the guidelines to which the supervisory bodies are appealing are NOT ADEQUATE. Moreover, we are publicly denouncing a SERIOUS OMISSION in taking those PRECAUTIONAL measures which, on the other hand, are urgently requested for antacid drugs.

Our results greatly reinforce the experimental observations of Dr. Theresa Deisher and especially the fact that the contaminant fetal DNA present in all samples analyzed in varying quantities (thus uncontrolled) is up to 300 times higher than the limit imposed by the EMA for carcinogenic DNA (10 ng/dose, corresponding to DNA contained in approximately 1000 tumor cells, derived from a statistical calculation, while the precautionary limit is 10 pg/dose), a limit that must also be applied to MRC-5 fetal DNA which inevitably contaminates Priorix tetra.

As a consequence, this vaccine should be considered defective and potentially dangerous to human health, in particular to the pediatric population which is much more vulnerable to genetic and autoimmune damage.