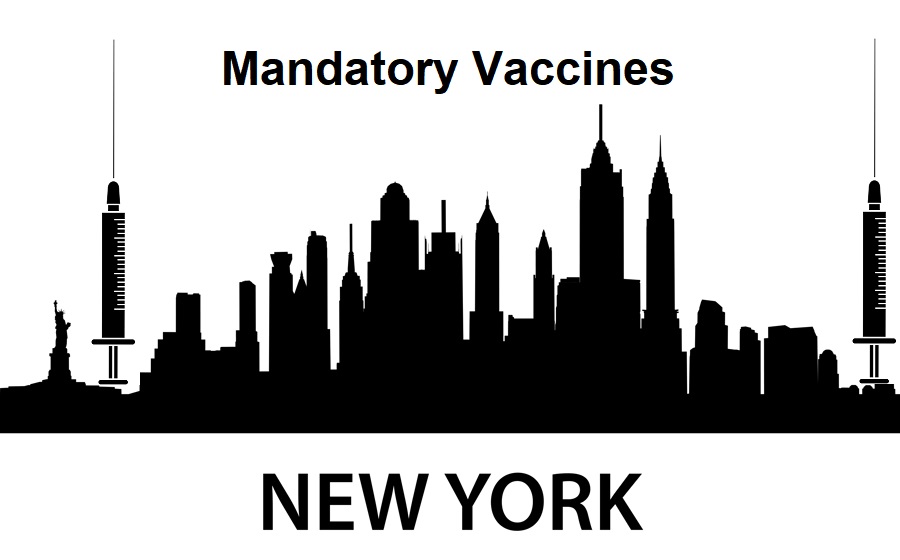 On June 13, 2019, the New York legislature quickly pushed a bill (A2371) to repeal the religious exemption to vaccination through both the Assembly and Senate in one day with no public hearings.1

The unprecedented legislative coup, which cut the citizens of New York out of participating in the law making process, culminated in the Governor of New York Andrew Cuomo immediately signing the bill into law.2 3

The Assembly narrowly voted 77 to 53 to approve the bill, after passing with a margin of only one vote out of the Assembly Health Committee, and then the Senate approved the bill 36 to 26.4

“This new law, which was rammed through the New York legislature in one day without public participation in the democratic process violates the human right to hold religious and spiritual beliefs that honor and protect bodily integrity,” said Barbara Loe Fisher, Co-founder and President of the National Vaccine Information Center.

“When a government has to resort to forcing parents to choose between violating their religious beliefs and conscience or giving their children a school education, that government has chosen to rule by fear and coercion and will lose the respect and trust of the people.”

However, there have been no cases of measles reported among children attending school with religious exemptions, and the CDC has stated that 97 percent of children attending kindergarten in New York in the 2017-2018 school year had received two doses of MMR vaccine.6

In a special report about measles and MMR vaccine published on May 25, 2019, NVIC provided scientific evidence published in the medical literature that:7

“It was a very dark day in New York for families with vaccine injured children,” said Dawn Richardson, NVIC’s Director of Advocacy.

“They had to witness industry backed misinformation being manipulated for the purpose of denying parents the right to obtain an exemption for sincere religious beliefs for children dependent on critical special education and therapies received at school.”

“The democratic process is designed to be inclusive and move slowly and deliberatively over the course of an entire legislative session but, in New York this year the democratic process was subverted, betraying those affected the most by this one day political stunt. At the end of the day, removing longstanding religious belief exemptions will not prevent measles from circulating in New York or any other state.”

About 24,000 children in New York currently attend school with a religious exemption to vaccination (0.8 percent of all students).8

Those children now will have to immediately get all state mandate vaccines according to the schedule published by the federal Advisory Committee on Immunization Practices or be home schooled next school year.9

Some families have said they will have to move out of the state because their children are already vaccine injured or have brain and immune system disorders that do not qualify for medical exemptions under narrow federal vaccine use guidelines.10

“New York has joined Mississippi, West Virginia, Maine and California as states that do not respect freedom of thought, conscience and religious beliefs, which are foundational liberties considered to be among the most important human rights,” said Loe Fisher.

“This action by the government of New York will only reinvigorate the vaccine safety and informed consent movement founded in 1982 by parents of DPT vaccine injured children. Today, more Americans understand that ‘no exceptions’ public health laws, which force use of a liability free pharmaceutical product in the name of the greater good, is a prescription for tyranny.”

On June 7, 2019, Crain’s New York Business reported that The Partnership for New York City, which represents more than 350 major city employers, wrote a letter to legislators calling for an end to religious exemptions to vaccinations.11

In what may or may not be a coincidence, according to Albany Business Review, ILUM Health Solutions, a subsidiary of vaccine industry giant Merck & Co, Inc., announced plans on June 12, 2019 to create 115 new jobs in the Albany area over the next five years, investing 48 million.13