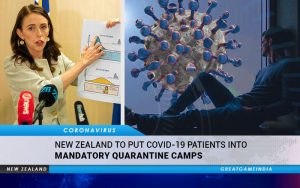 In a move right out of George Orwell’s 1984, New Zealand has announced it would put all COVID-19 patients into mandatory quarantine camps.

The Prime Minister of New Zealand has said that your each and every activity will be monitored in these camps and those that refuse to be tested would be forced to stay in the camps for a longer duration.

New Zealand’s Director-General of Health Dr Ashley Bloomfield announced at a press conference that the use of quarantine facilities marks a major departure from how positive cases were managed by health officials when New Zealand was last at level 3, as cases earlier in the year were told to simply self-isolate in their homes.

Dr Bloomfield says the mandatory quarantine will apply to both new cases and, if necessary, close family members who might be at risk.

“[It] shows how serious we are about limiting any risk of ongoing transmission – even in self-isolation and including to others in the household,” he added.

“A reminder, these facilities have been set up specifically and have excellent processes and resources in place to look after people with COVID-19, including health staff on site at all times.

“It will help us avoid any further inadvertent spread into the community as part of our overall response.”

The announcement didn’t say much about how the quarantine would be. However, New Zealand’s Prime Minister Jacinda Ardern in a Facebook live video explained in detail how each and every activity will be monitored in these camps and those that refuse to be tested would be forced to stay in the camps for a longer duration.

We are quarantining everyone. Now we are also mandating testing. That makes us the most stringent in the world. There are countries that are requiring self-isolation; we’re taking it a bit further.

If anyone moves into a common area or is getting some fresh air, which is all monitored no one can do that on their own.

They can only leave or be in a space to get a little bit of fresh air if they are supervised, because ofcourse it’s a quarantine facility.

We have put in millions of dollars into supporting that to happen.

I have a number of questions about people refusing – what do we do if someone refuses to be tested. Well they can’t now.

If someone refuses in our facilities to be tested, they have to keep staying. So they won’t be allowed to leave after 14 days. They have to stay on for another 14 days.

So, it’s a pretty good incentive. You either get your tests done and make sure you’re cleared or we will keep you in a facility longer. So I think most people will look at it and say I will take the test.

The announcement come days after Canada’s Chief Medical Officer of Health Dr. Barbara Yaffe exposed the uselessness of mandatory mass coronavirus testing warning that it takes resources away from more essential fields and does not “actually achieve anything.”