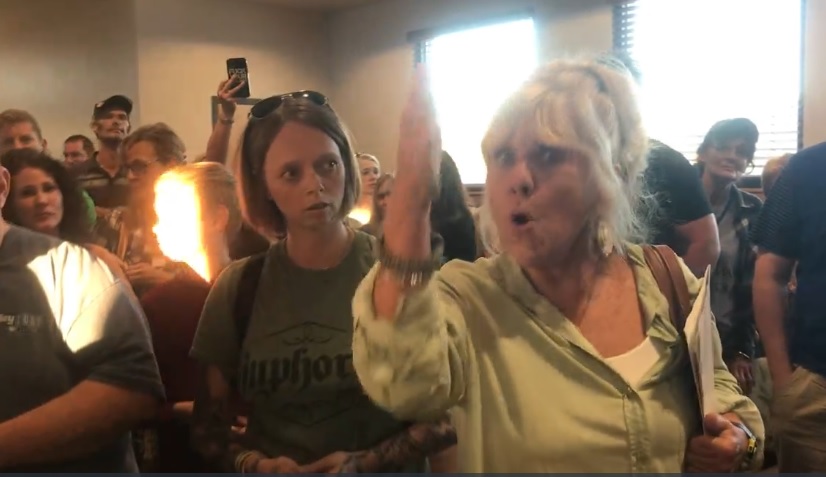 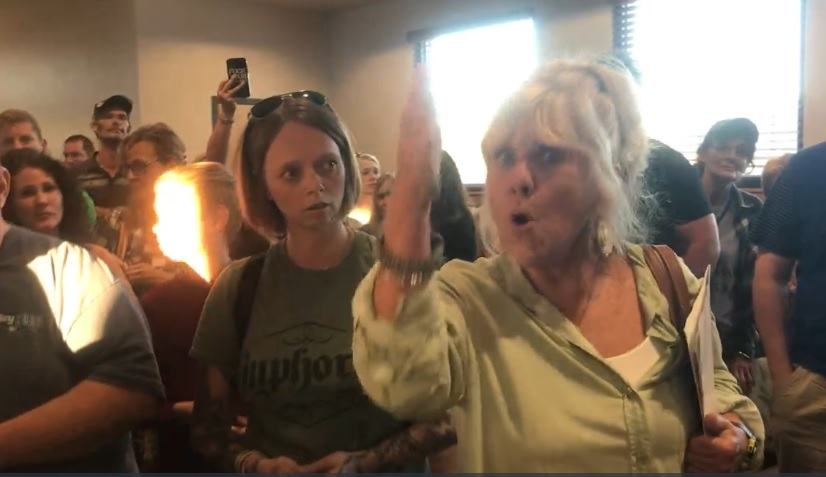 Some good news this week as apparently there is still a pulse among liberty-minded citizens in one small North Carolina town that turned out in mass to defy the City’s attempt to mandate mask requirements.

When told they had to wear a mask to participate in the meeting, they refused, and the City Council and local police backed down in front of the angry crowd.

This is the kind of action it is going to take across the country to stop medical tyranny.

by Becky Johnson
The Mountaineer

Tensions rose before the meeting ever began when the assembled crowd — who were being held in the lobby until the doors opened — learned there wasn’t going to be enough room for them all in the town board room.

Those wishing to speak were told to fill out forms and wait until their name was called. This didn’t sit well with many in the crowd, who demanded the meeting be moved to the sidewalk outside so that everyone could see and hear it — touching off a loud chant of “Take it outside.”

Town staff and police officers eventually quelled the crowd and convinced them that waiting for their turn to speak was the only option. Another uprising ensued after the waiting crowd was told they couldn’t come in without a mask when their turn rolled around.

The vast majority weren’t wearing a mask, given the whole reason they were there in the first place was to speak against the proposed mask mandate.

Some claimed exemptions for religious and health reasons, but others simply said they weren’t going to wear one and it would violate their rights to be denied entry to a public hearing on that grounds.

In the end, masks were offered but not compulsory.

The mezzanine outside the town board room, which was packed shoulder to shoulder, well exceeded the fire code capacity. But attempts to disperse some of the waiting crowd to the main lobby downstairs was likewise abandoned as fruitless.

By now, more police officers had been called in to help manage crowd control. The five town board members had arrived through a back door of town hall and were being held in a private room until the meeting began.

Once the doors opened, the first 20 people in line got inside and claimed the limited seats. The rest could listen to audio from the meeting streamed over a speaker, but given the large crowd, only those in close proximity could hear what was transpiring.

Several in attendance left after seeing they wouldn’t be admitted. Others continued to try to gain entry past police officers guarding the doorway. Staff meanwhile attempted to assure everyone they would eventually get a chance to speak — something that ultimately didn’t happen, however.

One by one, those who had filled out a slip of paper to speak came in to take their turn at the mic. Town Attorney Bill Cannon tried to ban the audience outside the doors from clapping and cheering for speakers, threatening on several occasions to cut off the public hearing if it continued. Eventually, the door to the meeting room was simply closed to keep the sounds of clapping out.

To the chagrin of the waiting masses, Cannon cut off the hearing after 32 minutes, saying the allotted time for the hearing was up. Many still waiting outside to speak, who were previously told by town staff they would get their turn, were upset that the town cut off the public hearing.

Although the public hearing was officially closed, every town board meeting has a designated period of general public comment mandated by law to give constituents the chance to address their local elected officials.

So, some who didn’t get their turn during the official public hearing instead decided to speak during the generic public comment session. However, they were cut off if they mentioned the word “mask.”

They were told they weren’t allowed to talk about masks during the public comment period because it had already been covered in the public hearing — despite most not actually getting to speak during the 32-minute hearing.

When a 16-year-old took the podium, as soon as she mentioned the word “mask,” Cannon interjected.

“Ma’am, this is not the public time period for talking about the ordinance and the masks,” Cannon said.

Several in the audience chimed in calling for the young speaker to be given a break.

Janet Presson was among those who didn’t get to speak in the public hearing and was barred from talking about masks during the public comment period, as well.

“We were told they were done with the mask issue and you couldn’t say the ‘m’ word,” Presson said. “They did everything they could to silence our voices.”

She said the town was clearly unprepared to handle the turnout.

“I think they were dumbfounded and horrified,” Presson said. “Mask mandates are a major issue that affect every single person. It is a hot-button issue. They should have done some better planning.”

The latest indication is the town leaders will not sign the mask proclamation tonight as originally believed.

Ron Paul also covered this in his daily broadcast, The Liberty Report.

How To Beat The Lockdowners

When city authorities in Waynesville, NC, announced that they were considering a city mask mandate they had no idea what was about to hit them. At the city council meeting at which the discussion was to take place, a massive show of citizen opposition and participation stole the show from the mandate promoters. Also today, why is flu disappearing in the US and elsewhere as Covid “cases” continue to rise?