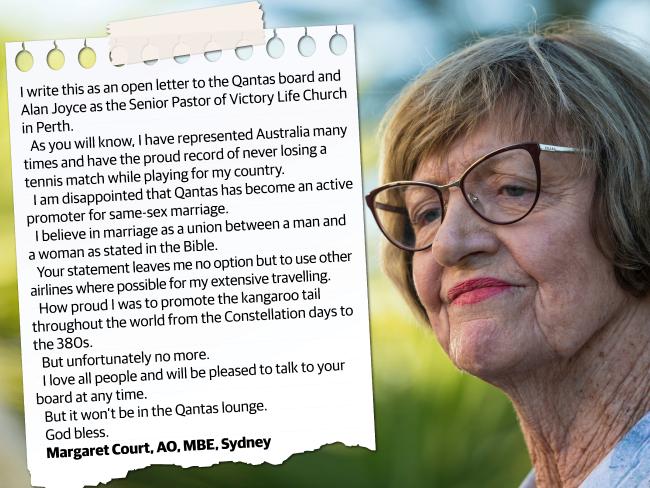 NOTE: What?? Actual Reporting By The Terrible Telegraph?

THE rainbow fascists are at it again. This time they’re trying to erase tennis great Margaret Court from the sport’s history because she dared to express a view on marriage contrary to Qantas’ gay activist CEO Alan Joyce. 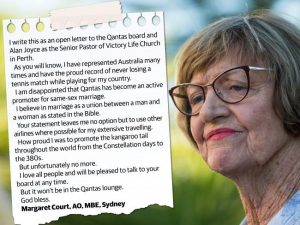 “I am disappointed that Qantas has become an active promoter for same-sex marriage,” she wrote in a letter to The West Australian last week.

“I believe in marriage as a union between a man and a woman as stated in the Bible. Your statement leaves me no option but to use other airlines where possible for my extensive travelling.”

Court is free to boycott Qantas if she wishes, and she is hardly the only Australian affronted by Irishman Joyce’s hijacking of our national airline as his personal political plaything.

But for sticking her head above the parapet, she has been pilloried, with a growing chorus, driven by Czech-American Martina Navratilova, pushing to delete her name from the Melbourne stadium named in her honour.

As a reader points out, this is a modern version of “Damnatio memoriae”, a punishment in Ancient Rome considered worse than death. Latin for “condemnation of memory” it was a form of dishonour aimed at erasing the person from history.

Such an extreme reaction to an honestly held Christian belief in traditional marriage is what is driving fence-sitters away from the cause.

One thought on “Oh Look, The Rainbow Fascists Are At It Again”