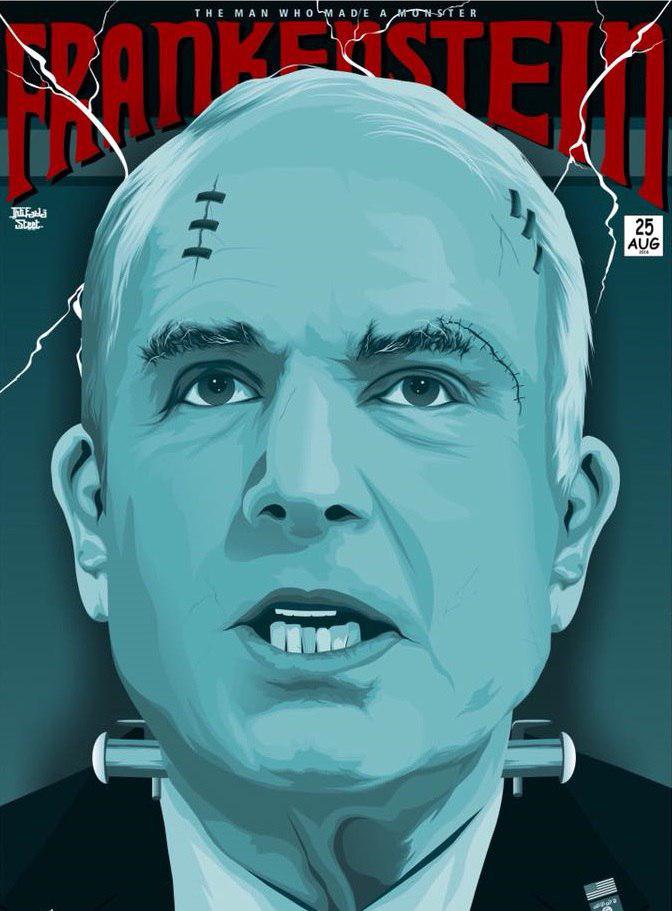 The grossest thing in American society is the reactionary sentimentality that fill our gossip infected hearts with a chemical reaction every time one of our supposed war heroes moves on to a more peaceful place. The carefully rehearsed statements from useless political figures numb our minds as all those who are sane must collectively wonder what on earth has a fusty bag of bones like John McCain ever done for us? Donald Trump was once new to the political scene and was still capable of burning bridges that were worth burning. It was Mr. Trump’s finest moment when he said that McCain was not a war hero. Such a statement was so necessary one would have to say it was the finest moment the Not-So-Great Pumpkin has ever brought the American people. It goes without saying that the day Trump meets his twisted maker, all politically correct sentimentality for his passing must be resisted.

Donald Trump’s machometer for a war hero was whether or not they got caught. The phrase war hero is a paradox to begin with, so we must forgive the dull Cheeseball for his lackluster definition. His instincts were right. John McCain is no hero.

John McCain was a fierce Zionist, but such a trait is almost as American as apple pie. McCain, more than almost anybody else, pushed for more troops in Iraq. When George W. Bush caved and sent in 20,000 extra troops to Iraq in 2007, Democrats labeled the move “The McCain doctrine”. Americans even dumber than Bush II have begun to label Bush “reasonable”. The reasonable Bush talked of 50 years in Iraq, McCain raised him to 100. McCain was among the most enthusiastic advocates of war in Afghanistan as well. And like his buddy Barack across the aisle, he felt threatened by Libya’s success under Muammar Gaddafi. McCain’s virile posturing against Vladimir Putin has been just as eye-opening as Trump’s bromance with Putin.

It all smelled rotten when John McCain sided with those good ol’ American values and invited his brother from another party Barack Obama to speak at his funeral—presumably to spite Donald Trump. Politicians nowadays like to pretend that the good ol’ boys club of the past was free of Trump’s virulent misogyny. But dig through McCain’s public statements and you will find that there are plenty of sexist ones. Give Trump this: he wastes little time on sentimentality. He believes in nothing and nobody. Trump is the natural next step for a society that is morally bankrupt and relies purely on inauthentic jingoistic kitsch to justify its ridiculousness.

John McCain and his brand of old school Americana died upon the arrival of the wrecking ball Donald Trump. McCain’s body may have stuck around a little longer than we wanted, but it was only a matter of time before he joined his ideology in the grave. Now it is on the Democrats to take up the mantle, and they have done so honorably. Democrats preach an influx of women into the fray, but for a party that is already abandoning #MeToo and reproductive rights, we are left to wonder what this really means. What is clear is that the Democrats have become the safe haven for clean cut self-righteous ex-military/intelligence candidates. The Democrats are the party of McCain now.

I remember the day Osama bin Laden was assassinated. It was hard to find an American who was not in heat. Parades erupted. Bloodthirsty politicians licked their chops. There was a certain pride that it was “our guy” Obama who brought him down. This was enough to make anyone queasy. If this many Americans had a taste for blood then, who was surprised that so many of us have salivated over Donald Trump’s madcap bullying. American culture is just too extreme. We divide everyone into friends and foes. If our friends die, we all have to lie about them. If our foes die, we have a parade. I don’t purpose a parade over John McCain’s death, just a little perspective.

John McCain helped orchestrate the devastation of several countries. Millions of deaths are on his bloody hands. The world is more peaceful with him gone from it. Why didn’t the 22 Yemeni children killed the day before cause the same amount of grief as McCain’s death? The U.S.-Saudi war on Yemen was backed by McCain as well. John McCain will be remembered as a war hero, but if I can paraphrase the merciless hawk Donald Trump, ‘Real heroes don’t go to war.’