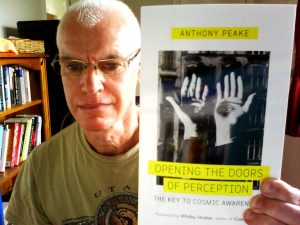 In 1954 Aldous Huxley’s hugely influential book “The Doors of Perception” was published. Huxley’s title is taken from William Blake’s 1793 book “The Marriage of Heaven and Hell”. In this Blake makes the following observation: “If the doors of perception were cleansed every thing would appear to man as it is, Infinite. For man has closed himself up, till he sees all things thro’ narrow chinks of his cavern.” Opening the Doors of Perception will update Huxley’s work and suggest process and procedures whereby man can, indeed, perceive reality in its true glory. The book will be in two sections. The first will discuss in great detail a concept I first introduced in my book The Daemon: A Guide to Your Extraordinary Secret Self. I termed this the “scale of transcendence” and suggested that there is a scale of perceptions whereby the doors of perception are slowly opened and, bit by bit, they reveal the true nature of “reality” as suggested by most esoteric teachings and mystic traditions. Most human beings perceive the doors as being securely closed. However there are occasions when the doors become slightly ajar and allow fleeting glimpses of what the Gnostics called “The Pleroma”. For “normal” people these glimpses are experienced during fleeting “noetic” experiences. However for others the doors are prized upon by certain neurological processes starting with migraine and progressing through various “altered-states” such as temporal lobe epilepsy, bi-polar syndrome, autism and finally, when the doors are fully open, schizophrenia.

Anthony Peake is a writer who deals with borderline areas of human consciousness.  His first book, Is There Life After Death? was published in 2006 and since then he has gone on to develop his own ideas together with exploring the latest areas of research in his field. His seventh book, A Life of Philip K Dick The Man Who Remembered the Future, is a departure from his previous works in that it is a mixture of biography, literary criticism and psychological/neurological analysis.

His eighth book, The Immortal Mind: Science and the Continuity of Consciousness Beyond the Brain, is a joint project with Professor Ervin Laszlo. This was published in Autumn 2014.  Click the relevant button for a summary of each of Anthony’s books. His ninth book, Opening the Doors of Perception, will be published on 13 September 2016. See announcement opposite for an opportunity to purchase an advance copy. Anthony will be doing several launch events for this book.

One thought on “Opening The Doors Of Perception With Anthony Peake”