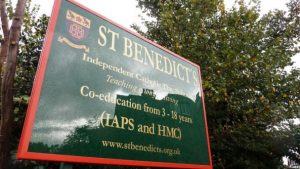 A culture of cover-up and denial allowed monks and teachers to rape and abuse boys at a “sadistic and predatory” Catholic school for decades, a damning inquiry has found.

According to an Independent Inquiry into Child Sexual Abuse (IICSA), Pedophile priests acted “like the mafia” and sexually abused pupils with “impunity” at St Benedict’s School in Ealing, West London

The Vatican repeatedly refused to give evidence to the public inquiry when it sought information about whether officials in Rome assisted a fugitive monk who was wanted in Britain for child abuse offences.

The Independent reports: Senior figures at the independent day school and the adjoining Ealing Abbey perpetrated the abuse, leaving staff afraid to speak out and victims with nowhere to turn, according to the damning report.

Since 2003, four members of staff – an abbot, a monk and two teachers – have been convicted of sexual offences relating to 21 children. The inquiry panel received evidence of at least 18 further allegations against those men and eight other monks and teachers, although it said the true scale of the abuse was likely to be “much higher”.

The report also highlighted the “flawed” response of the Catholic church, police, the Crown Prosecution Service, and child protection teams who failed to act upon “significant opportunities to stop abusers in the school”. This led to “a culture of abuse spanning over 30 years,” the panel said.

She added: “When action was taken, the responses of senior staff, headmasters and external institutions were often poorly judged or flawed. As a result, children were left at risk of abuse which could have been stopped decades earlier.”

Paedophiles at the school were “emboldened by this inertia”, the report suggested. “Serial abuser” David Pearce, a monk and headteacher of St Benedict’s junior school, committed sexual assaults “with apparent impunity” over a three-decade period, the inquiry noted.

At least 14 boys complained of being sexually abused by Pearce, who would line up naked pupils and openly film them at the school’s swimming pool.

Teachers and other monks were aware of his behaviour but “seemingly powerless to do anything about it”, with staff afraid that they would lose their jobs if they spoke up, the report said.

At least two teachers told the inquiry the culture at St Benedict’s was “like the mafia”. Staff said raising concerns “meant putting your job on the line”.

The report added Pearce had been protected by Laurence Soper, Ealing’s abbot between 1991 and 2000, who himself abused at least 10 children while in other senior roles at the school and abbey between 1972 and 1983.

Many of the assaults, which included multiple rapes, were committed by Soper “during acts of corporal punishment apparently inflicted on the slightest of pretexts”, the inquiry heard.

One of the abbot’s victims told the inquiry he ”feared going to school once the abuse started” and in adulthood had suffered depression and alcoholism, struggled to hold down work or maintain personal relationships, and attempted suicide several times.

“I feel like I am still in a black hole and just can’t climb out of it,” the former pupil said. “He has damaged me for life.”

In 2017, Soper was jailed for 18 years after being convicted of 19 charges involving 10 former pupils. He was tried at the Old Bailey after being extradited from Kosovo, where he had fled in an attempt to evade justice.

Pearce was jailed for eight years in 2009 after being convicted of indecently assaulting five boys.

Two lay teachers, John Maestri and Stephen Skelton, have also been also jailed for sexually abusing children at the school.

The IICSA strongly criticised Martin Shipperlee, the abbot who took over from Soper in 2000, for “serious shortcomings” in his handling of to abuse allegations, noting he failed to pass information on to police and “any action he did take was often inadequate and ill-judged”.

Father Shipperlee resigned from his role during the inquiry’s investigation into the school, acknowledging “serious failings” under his leadership.

Christopher Cleugh, headmaster of the school from 2002 to 2016, was also criticised in the report, which said he had minimised questions of child sexual abuse “to the point of materially misrepresenting significant facts”.

The inquiry highlighted mistakes by the Metropolitan Police in investigating early allegations against Pearce and Soper and found the CPS at fault for failing to prosecute of the pair in 2004.

The Charity Commission’s inquiry into Ealing Abbey’s handling of Pearce between 2006 and 2008 was found in the report to be “deficient”. Its review, which took place during the period when Pearce was abusing, concluded he was being managed appropriately.

The IICSA said the school’s current headmaster Andrew Johnson, appointed in 2016, had since made a number of improvements to safeguarding, including record-keeping and vetting.

But it added: ”It remains to be seen whether Ealing Abbey proves itself capable in the future of ensuring proper safeguarding of children at risk.”

The report, published on Thursday, forms part of the IICSA English Benedictine Congregation (EBC) case study within a wider investigation into the Roman Catholic church.

It said the EBC had a “closed, defensive and resistant” culture with teachers and monks “reluctant to support complaints for fear it would undermine the institutions and the church”.

The report noted the Vatican had declined a request from the inquiry for a witness statement on what steps were taken after Soper disappeared while on police bail in 2011, when he resided at Sant’Anselmo monastery in Rome.

“As a result, the inquiry is unable to fully understand and assess the role that the Holy See may have played,” said panel. John O’Brien, secretary to the IICSA, described the Holy See’s refusal to provide a statement as “regrettable”.

The inquiry had requested a statement from the Vatican through the Apostolic Nuncio to the United Kingdom, the Holy See’s diplomatic representative in the UK, who is covered by diplomatic immunity and cannot be compelled to give evidence.

Asked why the Vatican had declined to provide a statement, the Nunciature referred questions to the Catholic Bishops’ Conference (CBC) of England and Wales.

A spokesperson for the CBC told The Independent: “While a witness statement was not forthcoming from the Holy See, the IICSA report does confirm that there has been a disclosure of material from the Holy See, and this is under review.”

Cardinal Vincent Nichols, the Archbishop of Westminster and head of the Catholic Church in England and Wales, issued an “unreserved apology to all who have suffered” and “profound regret at all that has taken place”.

The cardinal will give evidence to the wider IICSA next month, which he said would “enable me to offer assurance of our willingness to learn further lessons” about safeguarding and the church’s response to abuse.