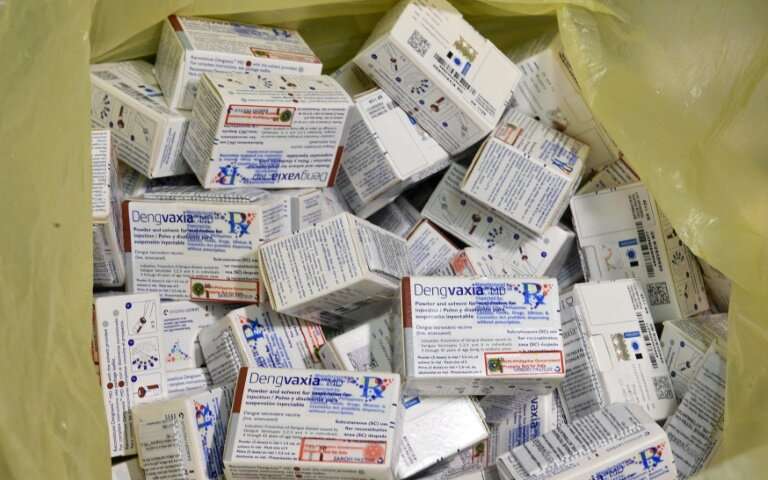 The Philippine government said Friday it would file criminal charges against six officials of the French pharmaceutical firm Sanofi Pasteur over the deaths of children injected with its Dengvaxia anti-dengue vaccine.

The Philippines in 2016 was the first nation to use Dengvaxia in a mass immunisation programme, but Sanofi disclosed a year later that it could worsen symptoms for people not previously infected by the dengue virus.

The disclosure sparked a nationwide panic, with some parents alleging the vaccine killed their children.

The controversy also triggered a vaccine scare that the government said was a factor behind measles outbreaks that the UN Children’s Fund said have killed 203 people so far this year.

The justice department said on Friday its prosecutors found grounds to hold Sanofi officials criminally liable and that charges of “reckless imprudence resulting to homicide” will be filed in court, but gave no timeframe.

The department said the charges were based on an investigation into the deaths of 10 children, adding other complaints were still being probed.

“Later on when certain deaths and other medical emergencies arose, they did not render assistance to the victims and their family … It’s a crime by neglect,” he told AFP.

The department said the crime is punishable by up to six years in prison.

Sanofi on Friday criticised Manila’s decision to file charges and vowed to defend the officials.

“We strongly disagree with the conclusions reached against Sanofi and certain of its employees and we will defend them vigorously,” the group said in a written statement.

Sanofi has repeatedly said the vaccine is safe, noting in a March 2018 statement: “No causal-related deaths were reported in 15 countries after clinical trials conducted for more than a decade with 40,000 subjects involved.”

Current and former officials of the health department will also be charged, the justice department said, adding complaints against two other Sanofi executives were dismissed.

Dengue, or haemorrhagic fever, is the world’s most common mosquito-borne virus and infects an estimated 390 million people in more than 120 countries each year—killing more than 25,000 of them, according to the World Health Organization.

Friday’s announcement comes less than two weeks after the Philippine Food and Drug Administration permanently banned the sale, import and distribution of Dengvaxia.