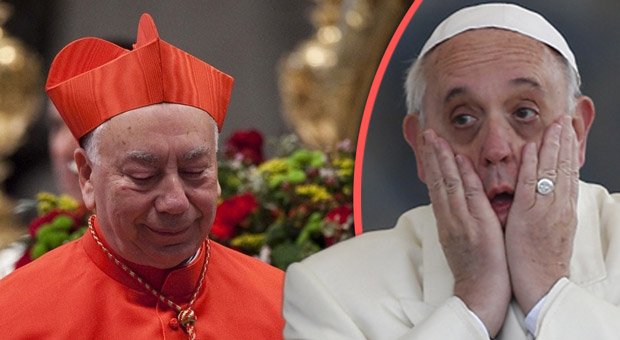 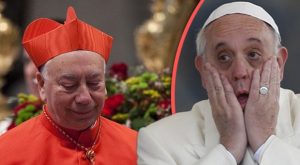 Vatican police raided a drug-fueled gay sex party at a top priest’s apartment near the city, according to an Italian newspaper report.

The occupant of the apartment is alleged to be the secretary of cardinal Francesco Coccopa­l­merio, head of the Pontifical Council for Legislative texts and a key adviser to the Pope.

The incident is symptomatic of a difficult period for the Pope. Four years into his papacy his reforms should be at full throttle; instead, the Catholic Church appears racked by conflict and scandal.

Critics blame the Pope’s choice of personnel: cardinal George Pell, appointed to clean up the Vatican’s murky finances, has taken a leave of absence to defend himself against sex abuse charges in Australia, and cardinal Gerhard Mueller, head of the Congregation for the Doctrine of the Faith, has not had his tenure renewed.

Both men are seen as doctrinal conservatives who could have been an obstacle to the Pope’s ­efforts to introduce a more merciful approach on questions of marriage, divorce and communion.

Both had signed a letter, together with 11 other cardinals, complaining that progressive forces were attempting to manipulate the outcome of a controversial synod on the family.

The manner of their departure risks inflaming a minority of traditionalists deeply unhappy with the Pope’s reforms. Cardinal Muller’s successor, Archbishop Luis Ladaria Ferrer, is accused of covering up sex crimes committed by a priest in Italy, compounding the reputational damage.

Conservatives have also been uncomfortable with the Pope’s reluctance to intervene in the Charlie Gard case, seeing him as aligned with English courts and bishops wanting to spare a sick child from suffering, rather than determined to defend life at all costs. The terminally ill 10-month-old boy has a form of mitochondrial disease — a genetic condition that causes progressive muscle weakness and brain damage — and has been at the centre of a legal battle between his parents, who wanted him treated in the US, and specialists at the London hospital who said the treatment was experimental and would not help.

“Resistance to the Pope is growing,” said a Vatican source. “We have seen five troubling ­stories emerge in a matter of a few days. They have created turbulence. There’s not going to be a schism, but the Pope has lost credibility in the eyes of many.”

The source said many of Francis’s appointments were controversial; from the prelate chosen to liaise with the Vatican Bank who was found to have been involved in sex scandals, to Francesca Chaouqui, a laywoman chosen for a fin­ancial reform commission who leaked Vatican files to the press.

“The Pope has been appointing people who are good parish priests to run dioceses in Italy, but it takes something else to be a bishop and they don’t have the stature for it,” the source said. “Paradoxically, these setbacks are pushing the Pope to accelerate his reforms, while resistance increases. Many Catholics pretend he’s not there and (will) just wait until he’s gone.”

Prominent journalist Emiliano Fittipaldi is unconvinced by the Pope’s reform record. “There’s much more shade than light,” he said. “The propaganda about Francis bothers me. The world has been told about a revolution before it happened. He became an idol immediately.”